USD/CNH forecast: is it time to invest in the US dollar vs Chinese yuan pair?

Douglas Thane
For traders News Forex USD/CNH forecast: is it time to invest in the US dollar vs Chinese yuan pair?
Rate this article
Share Article

The United States dollar vs the Chinese yuan renminbi (USD vs CNH) is one of the most significant and widely traded currency pairs in the world. The US and China represent the top two largest economies, with China being the largest global exporter and the US the world’s largest consumer.

The currency pair is heavily influenced by the Chinese government’s economic policy and trading relations between the two countries. This pair represents the USD and the offshore Chinese yuan. Within China the yuan is denoted as CNY but is not convertible with overseas currencies. In this pairing the USD is the base currency and the CNH is the quote currency. This means that at today's rate of 7.0596 it takes 7.0596 CNH to buy 1 USD.

The US dollar to Chinese yuan forecast is dominated by the escalating trade war between the two countries. President Trump and the US government frequently accuse the Chinese of manipulating their currency and this is not untrue. The currency is a “managed float” which essentially means the People’s Bank of China allows the yuan to float within a range agreed by the bank and the government.

China remains the world’s largest exporter and any quick shift away from the current controlled-float currency policy is unlikely. While the stated goal of the Chinese government is to increase the flexibility of the exchange rate, dealing with continued and intensifying economic pressure from the US as well as the coronavirus pandemic will take precedence in the short to mid-term over this long term strategic goal.

If history is a good indication, the upcoming US election will intensify the rhetoric about bringing manufacturing back to the US through tariffs and economic policy. This pressure may well decrease or perhaps even be reversed after the election in November, but traders should expect an increased intensity leading up to it.

When the “phase 1” trade deal was signed in January it offered hope that the escalation between the countries would subside. This optimism has been tempered by the reaction of the US to the strong-arm tactics being used to rein in Hong Kong and the dire unemployment numbers coming from the US.

While there has been significant upticks in the purchase of key US commodities, such as soybeans, China realises that many of the purchasing targets for US goods required by China in phase 1 may not be feasible due to the pandemic, if they ever were.

Again, the US election and the reaction of President Trump and presumed contender Joe Biden to the inability to meet these targets will be a key metric on which to base long-term analysis. Add to this the ongoing increase in military tensions as the US sends an ever-expanding naval presence to patrol the South China Sea and there is a valid tendency to believe that tensions will escalate further before a mutually agreed solution is found.

The prediction that the CNH could overtake the USD as the global reserve currency is slightly far-fetched at the present moment but not outside the realm of possibility in the long term.

Similar to almost every facet of the global economic structure, the pandemic has hastened the pace of change. The US federal reserve continues to issue seemingly unconstrained stimulus packages on the assumption that the world demand for dollars outweighs the possibility of inflation.


It is conceivable, if nothing else, that there will be a gradual shift towards a stable and funded currency such as the CNH. This shift could be intensified if the Chinese government is successful in its plans to launch a South Asian digital currency backed by the yuan to rival Bitcoin.

Can the recent USD/CNH bullish momentum accumulation spark a rally? Analysis from DailyForex.com believe that the USD/CNH is ready to use the support zone, located between 7.0394 and 7.0588 (marked by the grey area), as a platform for a short bullish momentum. 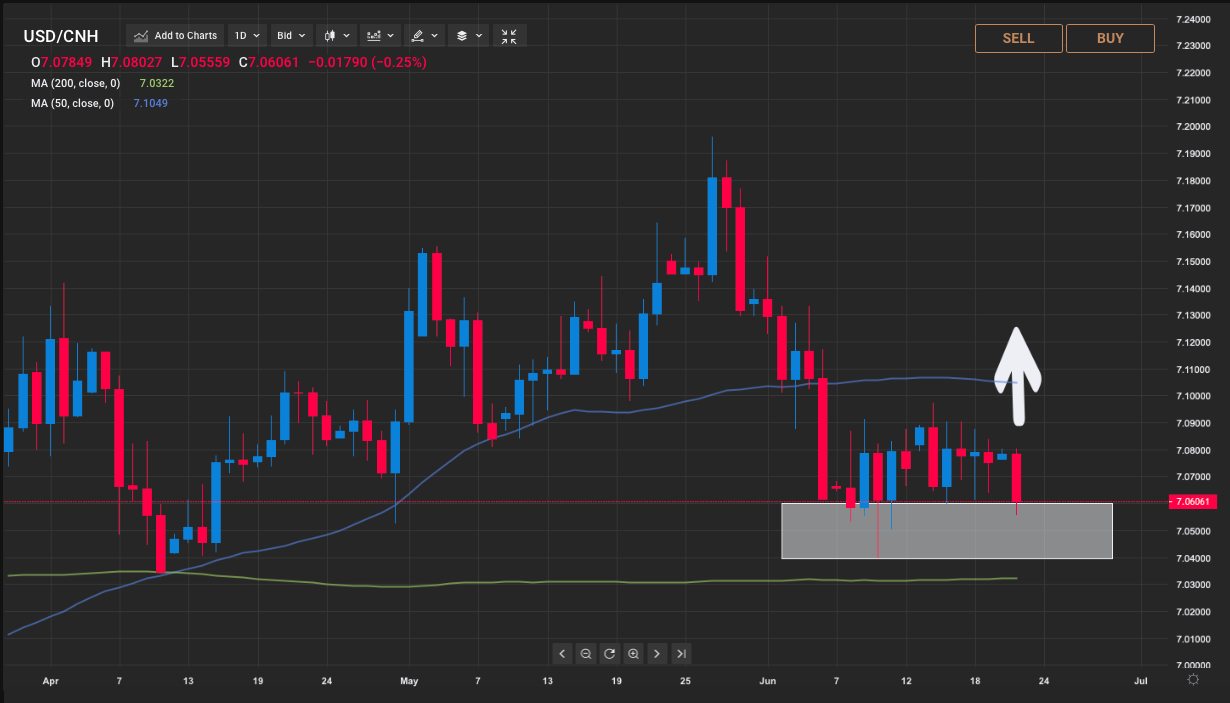 The dollar to yuan forecast is expected to remain relatively sideways in the coming few weeks. The People’s Bank of China set the reference rate for the yuan at 7.0913 late last week and analysts have indicated they expect the pair to trade within the band of 7.0500 to 7.1250 over the coming two to three weeks.

At the current USD/CNH FX rate of 7.0596 and with no sign of decreasing trade tensions between the two nations, this would indicate a mid-strong “Buy”. 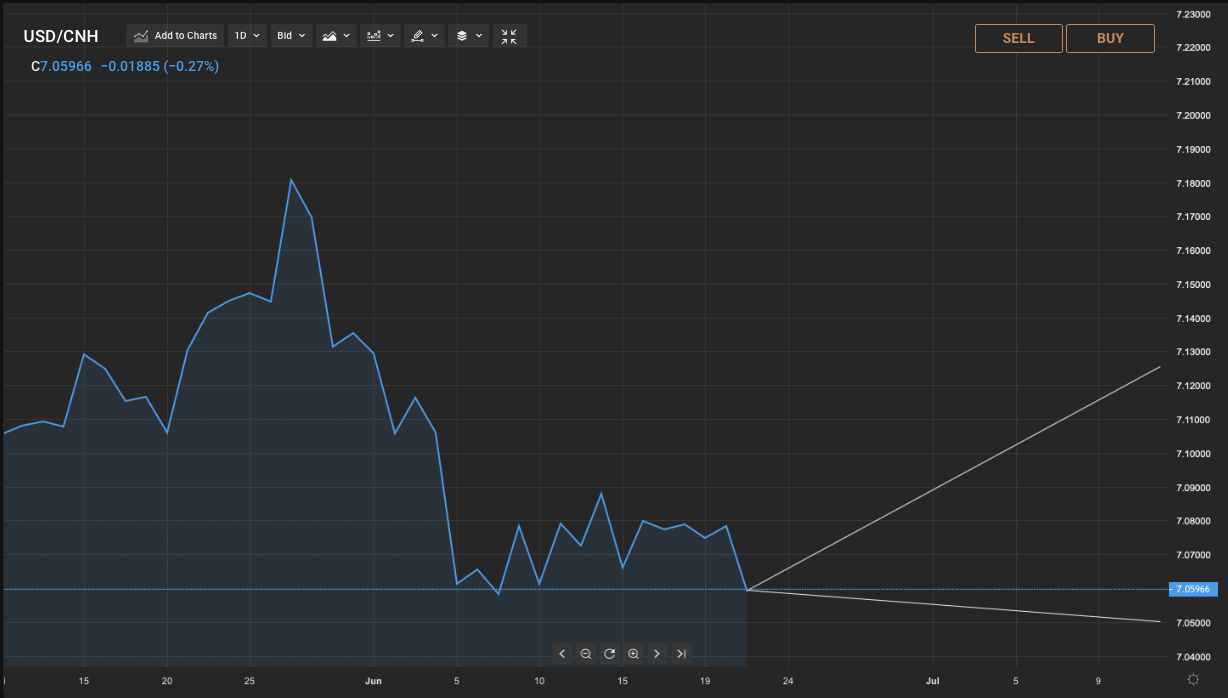 Traders should consider the People's Bank of China (PBOC) target rate and the lower and upper limits of the analysts’ predictions to base decisions in the next few weeks. As Trump continues to slide in the polls it would not be unexpected for him to announce fresh tariffs in a bid to appease his support base and this would tend to favour a further devaluation of the yuan.

Further lockdowns in China could have the opposite effect as the purpose of devaluing the yuan is to increase the competitiveness of Chinese goods. If manufacturing falls dramatically due to widespread lockdowns there will be less output and less of a need to decrease the value of the currency.

Overall, the USD/CNH forecast should be minimally affected by regional lockdowns in China and the situation should be monitored for large-scale outbreaks which would seriously impact national production.

Read more: AUD/CHF forecast 2020: can the AUD extend its rebound from a record low?

Capital.com USD/CNH forecast: is it time to invest in the US dollar vs Chinese yuan pair?