The company revealed pre-tax profits had rocketed 157% to £679.6m in 2021 as the world started returning to normal after the Covid-19 lockdowns.

However, those strong results haven’t been reflected in the stock price, which has been hampered by investor concerns over the broader housebuilding sector.

Is the Taylor Wimpey share price prediction bullish or bearish? In this analysis we take a look at the company’s recent results and assess the likelihood of the stock price rising over the coming months.

Although it’s risen 33% since the start of the Covid-19 lockdowns back in March 2020, closer analysis shows that the Taylor Wimpey historical share price has been on a real rollercoaster ride.

The five-year price chart shows that the Taylor Wimpey share value decreased by 27% as of 14 March 2022. 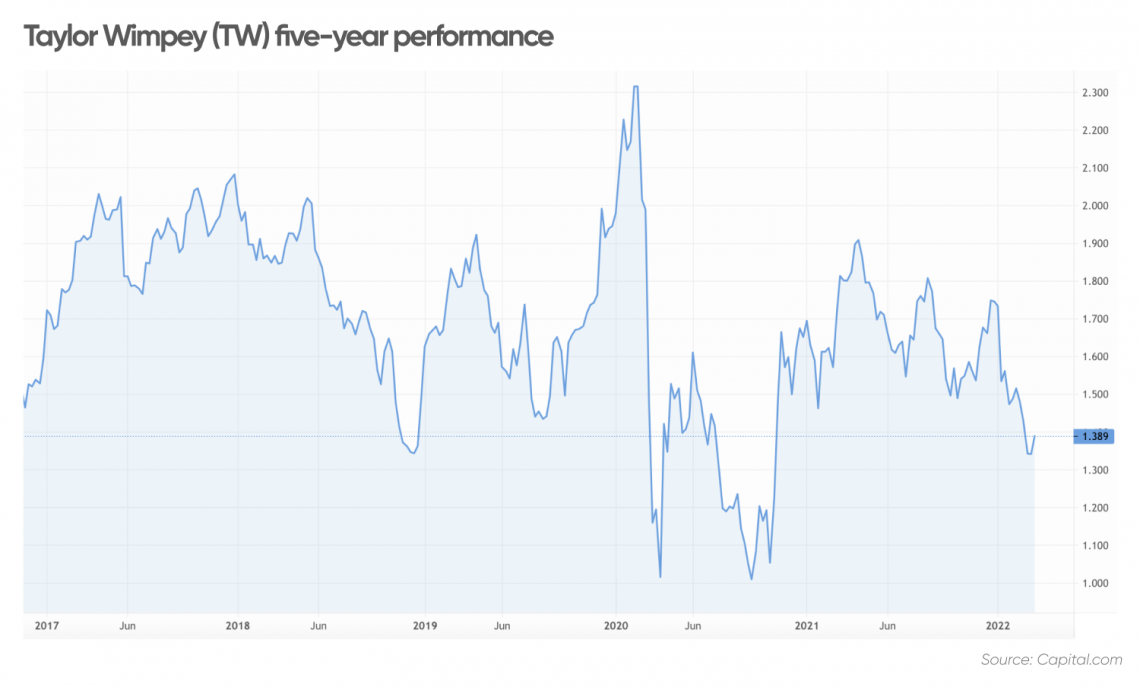 According to Charlie Campbell, an analyst at Liberum, the share prices of many housebuilders are now trading close to cycle lows, due to a number of issues.

“These are cladding taxes, rising mortgage rates and other consumer costs, build cost inflation and the ending of the Help to Buy scheme,” he said.

However, he sees significant upside in housebuilders’ shares due to confidence that these obstacles will be overcome, along with high wage growth and appetite for homes.

“We expect outperformance as profits beat estimates and valuation improves as risks diminish,” he said. “The housing market has started 2022 strongly.”

It has also acquired around 14,000 plots during the year, increasing the short-term landbank by approximately 8,000 plots to 85,000, in order to support future growth.

Taylor Wimpey also announced it had instructed Citigroup Global Markets Limited to purchase up to £75,000,000 of the company’s shares.

This was in relation to the £150,000,000 share buyback programme, to return excess capital to shareholders and enhance earnings per share.

In a statement, chief executive Pete Redfern said he was very pleased with the company’s operational, financial and customer service performance in 2021.

“Demand for our homes remains strong and we continued to drive significant margin improvement in 2021, as we optimise selling prices and maintain our strong focus on cost efficiency,” he said.

Redfern noted the “challenging geopolitical, macro-economic and regulatory environment”, but remained confident of delivering modest growth in completions in 2022, and making further progress towards the operating margin target.

Matt Britzman, an equity analyst at Hargreaves Lansdown, said the company had “come out hot with a strong set of results” as revenue and profits beat expectations.

“Sales up 53.6% takes them back to where they were pre-pandemic and the seemingly never-ending house price rises, alongside some good cost controls, meant operating margins of 19.3% were inching ever closer to the group’s target of 21-22%,” he wrote in a note.

Britzman also pointed out that demand seems to be sticking, with forward sales looking strong into 2022 as buyers aren’t being put off by higher mortgage costs as interest rates rise.

“Taylor Wimpey took a different approach over the pandemic, buying up land at good prices while others turned off the taps,” he added. “It was a bold move at the time, but with the market looking buoyant it should pay off over the next couple of years.”

Following the announcement in December 2021 that Pete Redfern was stepping down as chief executive after 14 years in the role, his replacement was named in February.

It will be Jennie Daly, currently the group operations director of the company, who will take the reins on 26 April 2022 at the conclusion of the annual general meeting.

In a statement, Daly said it was “an honour and privilege” to take on the role, emphasising that she was delighted to have the support of the board.

“This is an outstanding business with a strong landbank and strategic land pipeline, and a talented and committed team,” she said.

Taylor Wimpey stock forecast: What do the experts say?

According to Danni Hewson, financial analyst at AJ Bell, the big question for all UK housebuilders is how the cost-of-living crunch will affect the purchasing power of would-be homeowners.

“At the moment the answer seems to be very little, but then the real test is clearly yet to come,” she told Capital.com.

However, investors have appeared less than impressed with the sector for a while, she pointed out, with share prices down by double digits across all FTSE 350 housebuilders.

“Supply issues, rising commodity and labour costs, cladding remuneration and changes to Help to Buy have all, undoubtedly, factored into investor decision making,” she said.

However, Hewson believes there is one equation that hasn’t changed: demand still outstrips supply, and borrowing costs are still incredibly cheap even after the next anticipated interest rate rise.

“For buyers, saving will get a little harder and for builders, margins a little tighter, but if this budget crunch helps steady prices there’s plenty about the sector to tickle interest,” she added.

Sam Cullen, an analyst at Peel Hunt, has adjusted his target price for the stock down to 180p from 195p, due to additional tax charges, but upgraded the recommendation from ‘Add’ to ‘Buy’.

“The outlook for the market is very positive, with strong levels of demand and excellent price momentum,” he wrote in a note. “With outlet numbers set to improve in the second half of the year, the group is well placed to drive volume growth in full year 2023 and beyond.”

However, Wall Street analysts were far more optimistic as of 14 March. The consensus view of eight analysts, compiled by MarketBeat, was that the stock could be a ‘buy’ and rise 50% over the coming year to an average Taylor Wimpey share price target of 201.75p.

The highest TW. share price forecast suggested the stock could increase 64% to 220p over the next 12 months, while even the most pessimistic had shares rising 41% to 189p. 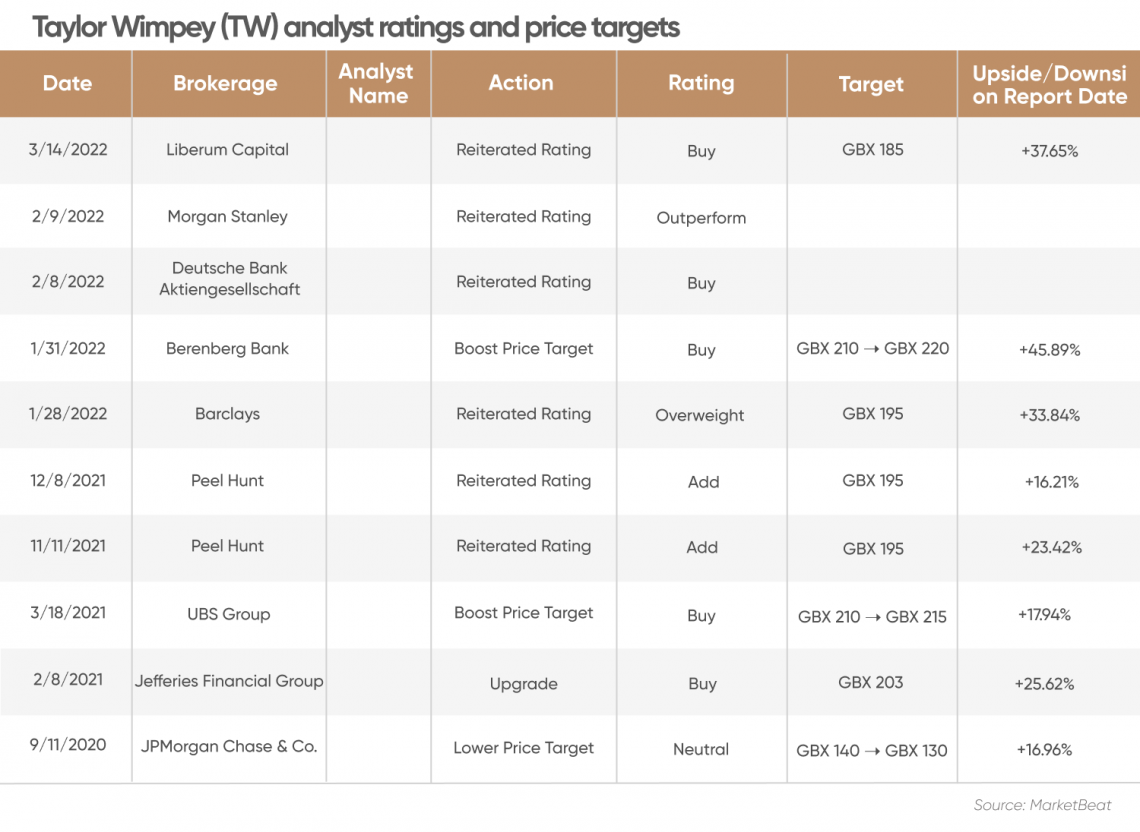 When looking for Taylor Wimpey (TW.) stock predictions, it’s important to bear in mind that analysts’ forecasts and algorithm-based price targets can be wrong. Predictions are based on making fundamental and technical studies of the TW. stock historical price pattern – but past performance does not guarantee future results.

It is important to do your own research and always remember your decision to trade depends on your attitude to risk, your expertise in the market, the spread of your investment portfolio and how comfortable you feel about losing money. You should never invest funds that you cannot afford to lose.

Natural Gas 2.684
Trade
-1.830%
US100 12108.1
Trade
+0.400%
BTC/USD 23122.60
Trade
+0.640%
XRP/USD 0.40515
Trade
-0.260%
Oil - Crude 79.53
Trade
+0.300%
The difference between trading assets and CFDs
The main difference between CFD trading and trading assets, such as commodities and stocks, is that you don’t own the underlying asset when you trade on a CFD.
You can still benefit if the market moves in your favour, or make a loss if it moves against you. However, with traditional trading you enter a contract to exchange the legal ownership of the individual shares or the commodities for money, and you own this until you sell it again.
CFDs are leveraged products, which means that you only need to deposit a percentage of the full value of the CFD trade in order to open a position. But with traditional trading, you buy the assets for the full amount. In the UK, there is no stamp duty on CFD trading, but there is when you buy stocks, for example.
CFDs attract overnight costs to hold the trades (unless you use 1-1 leverage), which makes them more suited to short-term trading opportunities. Stocks and commodities are more normally bought and held for longer. You might also pay a broker commission or fees when buying and selling assets direct and you’d need somewhere to store them safely.
Capital Com is an execution-only service provider. The material provided on this website is for information purposes only and should not be understood as an investment advice. Any opinion that may be provided on this page does not constitute a recommendation by Capital Com or its agents. We do not make any representations or warranty on the accuracy or completeness of the information that is provided on this page. If you rely on the information on this page then you do so entirely on your own risk.