Taylor Wimpey shares have been taking a breather lately, after a 16-day bull run ended up pushing the price from the low 100s to the stock’s pre-pandemic highs. This was amid a strong recovery seen in the UK housing market along with upbeat news on the firm’s financial front.

With the British homebuilder shares now taking a pause after that furious uptick, it is perhaps a good time to reassess the stock’s short-term outlook, along with the drivers that have been pushing the price higher lately, to identify a potential opportunity to buy the dip.

In the following Taylor Wimpey share forecast let’s take a closer look at the fundamental and technical elements of this stock, to see where it might be headed over the next few weeks.

Taylor Wimpey shares have delivered a 22 per cent loss for investors since the year began, as the pandemic ravaged the homebuilding industry amid government-enforced shutdowns.

During the first semester of the year, companies in the sector were forced to shut down their operations. Demand dried up, as people were forced to stay locked in within their homes to stop the spread of the virus. 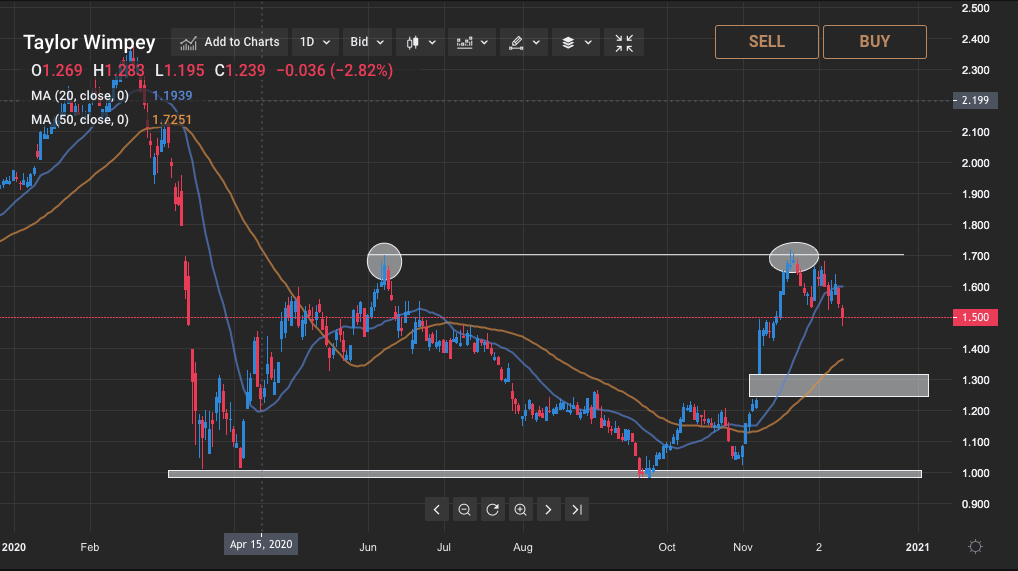 The worst days of the pandemic for Taylor Wimpey ended up pushing the shares to the low 100s, a level not seen in TW since 2014, while the stock has struggled to move above the 170p level for months now – making this the resistance to overcome now that a vaccine for the virus has started to be rolled out in the UK.

Meanwhile, the combination of pent-up demand and historically-low mortgage rates seems to be providing a boost for the housing market, as most homebuilders in the UK have reported a surge in new orders while they have been able to resume their operations.

In this regard, Taylor Wimpey’s November 9 trading update indicated that the firm expects to achieve around 85 to 90 per cent completions in 2021 as the efficiency of their construction sites gets back to normal, while the company now expects to deliver an operating profit by the end of its 2020 fiscal year – ended on March 2021 – that could possibly exceed the upper end of the market’s consensus.

This positive backdrop has been the driving force behind the furious 16-day uptick seen by TW shares from 9 November to 23 November and, given the strong recovery in the housing market and the upbeat tone of the company’s remarks, it would be difficult to see the firm’s shares moving once again to those 100p lows, which could now serve as a floor, along with other technical setups, for another bull run over the coming weeks. 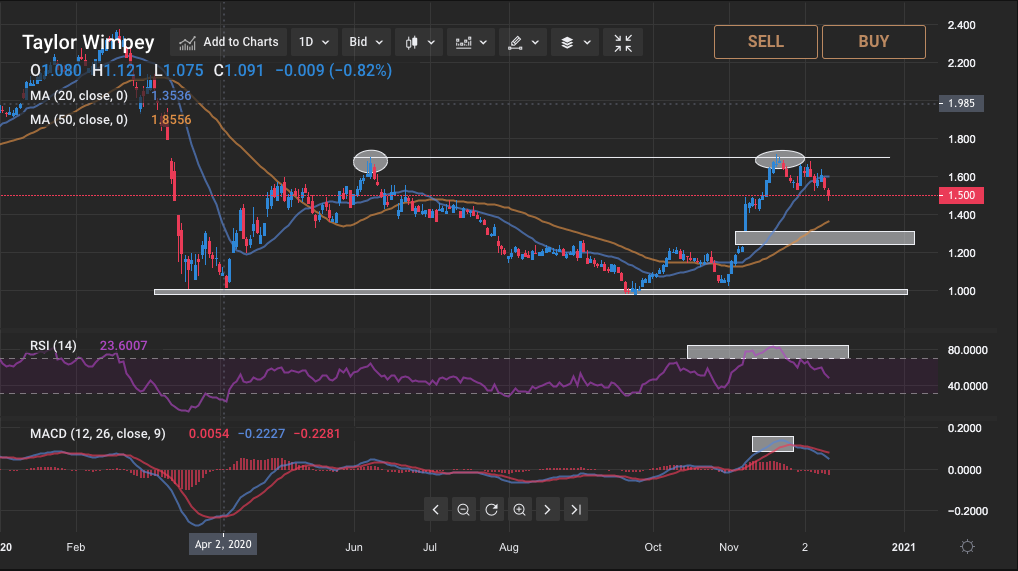 The daily chart above shows how the rally seen since November 9, amid a series of positive news, ended up topping at the 170p level, a long-dated ceiling for TW shares in the past seven months at least.

This rejection, although bearish in the short-run, keeps weakening the strength of that resistance,as bears will eventually capitulate if the demand for the shares keeps pushing the price above that threshold.

Meanwhile, the stock has two important supports while it heads down. First, the 50-day moving average at around 135 per share and then, the bullish gap in the price action left behind during the November 9 rally – which took place on the day that Pfizer unveiled the efficacy of its vaccine candidate.

Those two supports should hold up nicely, given that there are no material changes to the company’s financial outlook – which has improved significantly in the past few weeks.

On the other hand, the latest downtick was widely anticipated as TW shares stepped on deep overbought territory in the RSI, while the MACD was too heavily extended from a historical perspective.

However, this downtick could provide an opportunity for buyers to step in as the price action aims once again for that 170p stronghold. 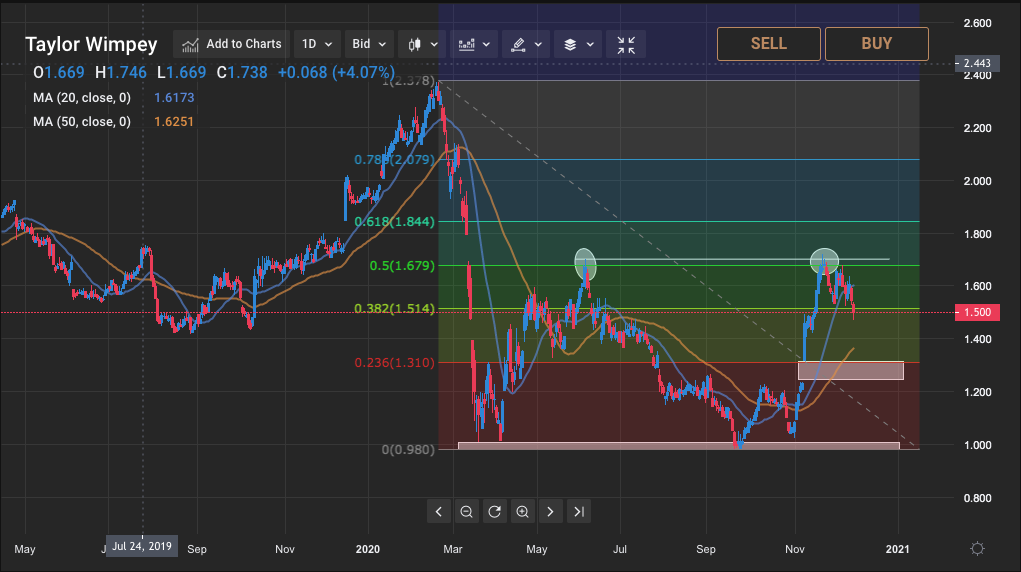 A move above that level would effectively cross the 0.5 Fibonacci level shown in the chart, which would result in a short-term TW share price forecast of 184p and a subsequent one at 208p if the rally continues.

Nine out of the fifteen analysts surveyed by Yahoo Finance UK are currently bullish on Taylor Wimpey as the housing market boom could benefit the company over the next twelve months and possibly for longer than that.

Meanwhile, the rollout of the vaccine in the UK – with the vaccination program reaching the majority of the population by the end of the first quarter of 2021 – is providing another positive catalyst for the business, since pent-up demand is starting to unravel.

From the remaining six, five analysts remain neutral on the stock, while only one analyst is currently camping on bear territory.

Meanwhile, the consensus 12-month Taylor Wimpey share price prediction from this group of analysts sees the price hovering above the 187p level – which represents a 24.2 per cent upside based on the Friday, December 11 closing price – while the lowest target sits at 130p and the highest at 245p per share.

Given the significant bullishness of most analysts, institutional players could feel attracted to the shares at these levels, which could give the price a boost in the following weeks. The firm’s latest trading update is the most upbeat news on Taylor Wimpey, as the company provided an improved outlook that included a forecasted year-end operating profit that could be well above the upper end of analysts’ forecasts for the period – currently sitting at £292m.

Meanwhile, the firm also stated that if the current tailwinds, provided by a low-interest-rate environment along with attractive land costs, persist during 2021, the firm could be heading to deliver an operating profit of around £626m by the end of its next fiscal year.

If those targets were achieved, the company’s current market capitalisation would only represent nine times its operating profit – which is a fairly attractive number from a fundamental perspective.

Read more: Aston Martin share price forecast for 2021: is it time to trade on hopes of a recovery?