If you live in the US, there’s a 75% chance that you live within 10 miles from a Target (TGT) store. Formerly known as the Dayton Company, the company is based in Minnesota, where the first Target store was established in 1962. With over 1,900 stores, the general merchandise retailer has its footprint in all 50 US states as well as the District of Columbia. 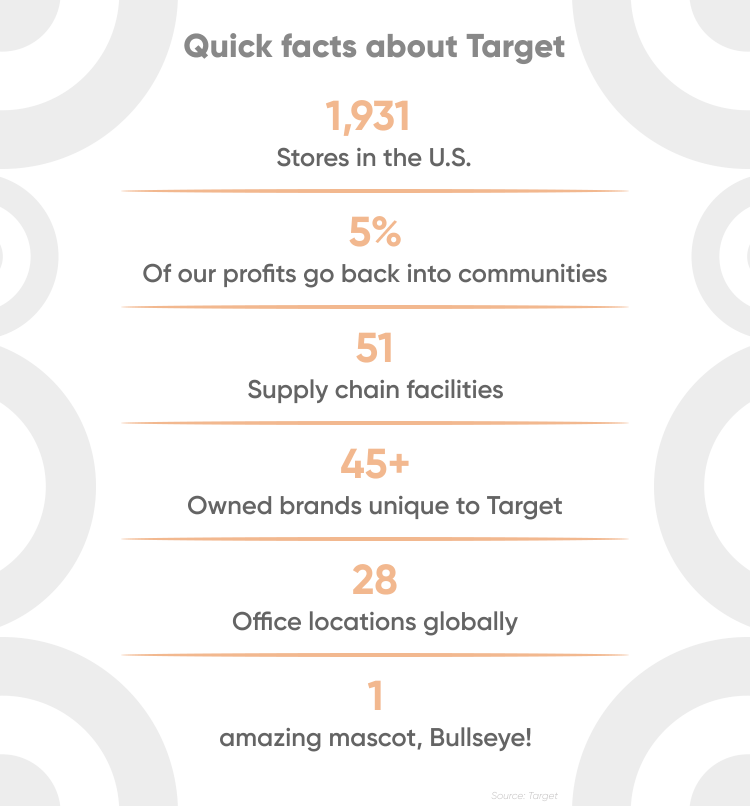 Target offers a range of national and private brands, which it refers to as ‘owned brands’. Its red bull’s eye logo is one of the most recognised corporate brands.

On 14 December 2021, Store Brands awarded Target the Retailer of the Year award for 2021. In an interview with Store Brands, Target stated it aspired to differentiate its operations through its owned brand portfolio.

Following research into its customers’ tastes and preferences, Target launched over 30 store brands uniquely curated for its target market, 10 of which have surpassed sales of $1bn. This growth trajectory resulted in record breaking top-line growth for the company.

However, profitability remains a concern for the retail giant. On 18 May, Target released its financial results for Q1 2022 and reported adjusted earnings per share (EPS) of $2.19, which fell short of the Zacks consensus estimate of $3 and was 40.65% lower than the previous year’s $3.69.

After the results were reported, the TGT stock price fell by nearly 25%. Join us as we find out what lies ahead for the retailer, undertake a Target stock analysis, and get analysts’ insights on the Target future stock price.

Marking 20 consecutive quarters of sales growth in Q1 2022, Target reported over 95% of its first quarter sales was supported through its physical stores, with store sales increasing 3.4% YoY. Digital sales were also up by 3.2%, following growth of 50.2% in the previous year.

Target launched its Drive-Up service back in 2018. This offers customers free contactless pickup from a nearby Target outlet, as they can have their online orders brought out to their cars by the store members within minutes of placing the request.

Drive-Up has been marketed as the ultimate shopping and saving sidekick for the customer and was instrumental in driving more than half of Q1’s digital sales. 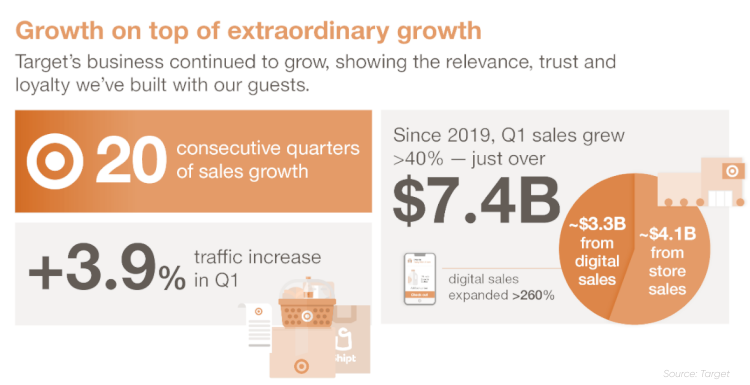 In its first quarter earnings, Target reported its top-line growth was primarily supported by the frequently-purchased consumer products such as food and beverages, beauty items and household essentials. However, a drastic fall was observed in purchases of home goods and apparels.

With inflation at a four-decade high, there was a switch in consumer spending as prices continue to outweigh wages. Target’s cost of sales of $18.4bn remained inflated by over 10%, compared to $16.7bn in 2021. The selling, general and administrative expenses stood at $4.7bn for Q1 2022, a 5.6% hike YoY.

Owing to supply chain disruptions, Target’s fuel and freight costs soared in Q1 leading the company to mark down its inventories. Overall, inventories stood at $15bn, 8.5% higher from the previous quarter’s $13.9bn, and 43.11% higher from $10.5bn YoY.

The inflated inventory levels led to inventory impairment costs, which contributed to the overall dip in earnings. Michael Fiddelke, chief financial officer at Target, mentioned that the inventory markdowns were likely to continue into the next quarter as well.

The operating income for the company was reported at $1.3bn, 43.3% lower than the $2.3bn figure from Q1 2021. Commenting on the company’s disappointing earnings, chairman and CEO Brian Cornell said:

“Throughout the quarter, we faced unexpectedly high costs, driven by a number of factors, resulting in profitability that came in well below our expectations, and well below where we expect to operate over time.”

Despite the decreased earnings, Target stock dividends reflected a 32.4% dividend per share increase, partially offset by a decline in the average share count. The company paid $424m in dividends for Q1 2022, compared with $340m the previous year. Additionally, Target signed on to an Accelerated Share Repurchase (ASR) arrangement for up to $2.75bn of its common stock with the final settlement outstanding as of end of Q1 2022.

Target has committed to being a net-zero enterprise by 2040, with its sustainable strategy Target Forward. By 2030, the company aims to source 100% of its electricity from renewable sources. Compared to 2017, Target has managed to reduce 27% of its direct operations’ emissions.

In recent TGT stock news, on 17 March 2022, the company announced the launch of its retrofit Vista California store. Operating on an environmentally friendly store model, this property will generate more renewable energy that it consumes annually, through solar panels and carport canopies.

What is your sentiment on TGT?

Give TGT a try

Target has applied for a net zero energy certification from the International Living Future Institute, and aspires to transmit the 10% energy surplus generated through the store back to the local power grid.

“We’ve been working for years at Target to shift toward sourcing more renewable energy and further reducing our carbon footprint, and our Vista store’s retrofit is the next step in our sustainability journey and a glimpse of the future we’re working toward.” 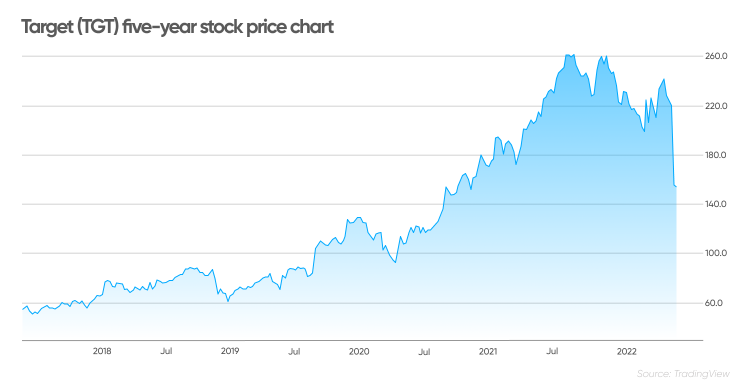 “The Target margin shortfall is more dramatic than what Walmart posted on Tuesday and clearly there are some industry wide/macro problems occurring. Food/gas inflation are drawing dollars away from discretionary/general merchandise, forcing aggressive discounting to clear out products.”

“The stock has lost close to 30% this week and is presently trading near 153 levels. The most important level to watch for the stock is the 200-week moving average (MA), which is presently at 144.81. It would be crucial to see if the stock takes support at this level, which is one of the most important supports in the near term. Any fresh entry in the stock must have this level acting as a protective stop.”

Target announced on 7 June that it planned to trim down excess inventory by cancelling orders and implementing additional markdowns to products. The retailer also lowered its operating margins guidance for the quarter — it currently anticipates its operating margin rate for Q2 2022 to come in at 2%, which is lower than the outlook it gave less than three weeks ago, when it said that the same figure would total 5.3%.

Target shares fell 2.3% following the news of the inventory clear-out, but the stock has since rebounded slightly.

In a note to Capital.com, Chris Beauchamp, chief market analyst at online trading platform IG, commented that buyers had stepped in to halt the slide on 7 June:

“What threatened to turn into a nasty afternoon for risk assets seems to have been headed off for now by a wave of buying. Target’s warning about rising inventories and the hit to margins seemed to be the spark markets had been looking for to drive a fresh big move lower, but it looks like this bear market rally isn’t rolling over just yet. Insider buying in tech stocks continues at a heavy pace, and this seems to have provided some comfort to the broader market. It is also interesting that equities have weathered the RBA’s increased pace of rate hikes, but with the ECB and US CPI still to come this week the big issues are set to make a return.”

Beauchamp placed the market's reaction in the global context, and continued with a word of caution in light of the upcoming US reporting seasons:

“A cut to the World Bank’s growth forecasts has reminded investors of the broader problems, even as some of the gloomiest predictions are reined in. The immediate earnings impact appears to be priced in, as demonstrated by the rebound following Target’s warning, but this equity bounce could be under serious pressure by August as the next US reporting season gets underway.”

As of 9 June, 26 analysts’ predictions compiled by TipRanks gave a consensus TGT stock price target for 12 months of $183.23. The stock projection varied from a potential low of $150 to a high of $231. The average price target represented a 16.71% upside change from the trading price of $156.95 on 9 June. Seventeen analysts recommended buying TGT stock and nine maintained a ‘hold’ rating.

Several brokerage firms and analysts updated their TGT stock price forecasts after the price drop on 18 May.

When looking for stock forecasts, it’s important to bear in mind that analysts’ forecasts and price targets can be wrong. Analysts’ stance on whether Target stock is a buy, sell or hold is based on making fundamental and technical analyses of the stock’s performance. Past performance is no guarantee of future results. You should do your own research before investing and remember to never invest money you can’t afford to lose.

Pfizer stock forecast: Is the stock set to rise?