SPOT stock price: How has it performed?

Issues that Spotify has faced

Outlook for the business

Spotify stock predictions: What do the analysts think?

Spotify stock forecast 2022: Where will the price go next?

This year has been challenging for Swedish audio streaming service Spotify (SPOT). The share price has plummeted almost 60% since the start of 2022.

But what does the future hold? In this analysis we take a look at the company’s recent results and what investors could expect over the coming months.

Spotify has revolutionised how we listen to music since launching back in 2008. It gives people access to millions of songs and podcasts.

While you can listen to content for free, upgrading to Spotify Premium provides access to exclusive features such as improved sound quality, and an on-demand, offline, ad-free experience.

SPOT stock price: How has it performed?

Spotify went public in a direct listing back in early April 2018. By the end of its first day of trading, the price stood at $149.

The stock hasn’t managed to retest its highs since then and gradually lost more than two thirds of its value. As the market closed on 17 June 2022, the price stood at $99.27. 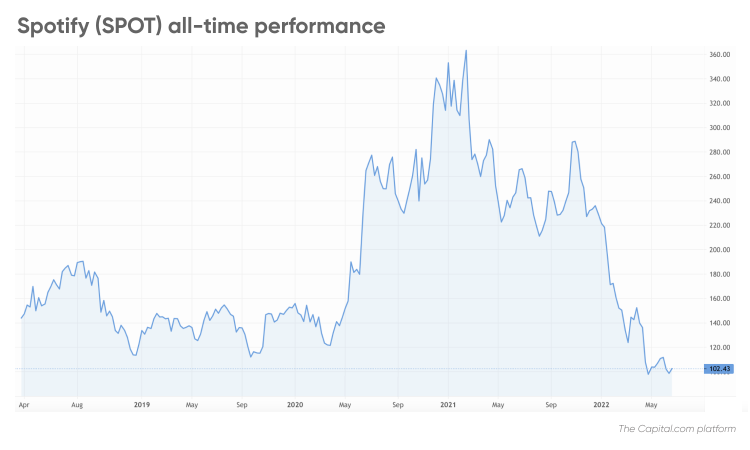 Issues that Spotify has faced

The past year has seen it suspend its service in Russia due to the country’s attack on Ukraine and deal with the fall-out from the Joe Rogan Experience (JRE) controversy.

The comedian, whose podcast Spotify bought the exclusive rights to in September 2020, was accused of spreading Covid-19 disinformation.

Subsequently, old clips of Rogan using racial slurs were unearthed, prompting him to immediately apologise and explain his actions.

A number of previous JRE episodes have since been deleted in response to criticism.

The number of Premium subscribers grew 15% year-on-year to 182 million in this period, up from 180 million in the last quarter.

“While this is slightly below our guidance, after excluding the involuntary churn of approximately 1.5 million subscribers as a result of our exit from Russia, growth was above expectations and aided by outperformance in Latin America and Europe,” It stated.

Outlook for the business

So, what is the Spotify stock forecast for the second quarter? The company expects the number of monthly active users to increase by six million to 428 million.

This figure includes the loss of approximately eight million as a result of the Russian operations closing, and the predicted addition of 14 million net new monthly active users.

Total premium subscribers are expected to hit 187 million, with the anticipated addition of six million net new arrivals counterbalancing the loss of 600,000 disconnects from Russia.

It also predicted that total revenue would come in at €2.80bn, with gross margin at 25.2%, and an operating loss of €197, including the €50m impact of unfavourable foreign exchange movements.

“We will be a company that can generate $100bn in revenue annually.”
by Daniel Elk, Spotify’s founder and CEO.

Speaking at the company’s recent investor day, Daniel Elk, Spotify’s founder and chief executive, insisted it was building a model no other platform had dared to attempt.

“I believe that over the next decade, we will be a company that can generate $100bn in revenue annually, and that we can achieve a 40% gross margin and a 20% operating margin,” he said.

He branded Spotify a “highly scalable machine” and pledged to accelerate the move to a more dynamic and open platform to “entertain, inspire and educate” more than one billion users.

“As the world’s creator platform, we will provide the infrastructure and resources that will enable more than 50 million artists and creators to grow and manage their own businesses, to monetise their work and effectively promote it,” he added.

What is your sentiment on SPOT?

Give SPOT a try

In mid-June 2022, Spotify announced it had closed the acquisition of Findaway, a global leader in digital audiobook distributions.

According to the statement, Findaway works across the entire audiobook ecosystem with a platform and offerings that serve authors, publishers, and consumers.

Nir Zicherman, Spotify’s global head of audiobooks, said the potential market for this segment is expected to grow from $3.3bn to $15bn by 2027.

“We believe this presents a unique opportunity to introduce music and podcast listeners around the world to audiobooks and drastically expand that market,” he said.

Spotify stock predictions: What do the analysts think?

While Spotify’s first-quarter 2022 results beat the firm’s guidance, it was still a mixed picture, according to Ali Mogharabi, senior equity analyst at Morningstar.

According to his SPOT stock forecast there were positives and negatives, with revenue coming in below expectations, while the bottom line beat them.

“Growth in listener count continues to demonstrate the minimal negative impact of last year’s price increase on listener growth and the material positive effect on listener monetisation as it increased year over year for the fourth straight quarter,” he said. “While the firm’s second-quarter guidance is slightly below the consensus estimate, it still projects for solid double-digit growth in both premium and ad-supported segments.”

However, he has reduced his Spotify share price forecast. “We lowered our fair value estimate to $195 from $212 mainly due to the impact of a much stronger dollar and partially due to Spotify’s lower quarterly guidance as operations in Russia have been closed and the war in Ukraine has created more uncertainty,” he added.

The Spotify stock forecast of Doug Anmuth, an analyst at JP Morgan, is for the share price to hit $150 by December 2022. It’s why he has an overweight rating on the company.

He also highlighted the impact of how it’s seen. “Management acknowledged that the company is not well understood by the Street, partly due to its own limited disclosures, but also because recent investments in podcasts and other initiatives obfuscate the margin process within core music,” he explained.

According to Danni Hewson, financial analyst at AJ Bell, the big question for Spotify is how many paid users it will be able to hang onto as the cost of living crisis starts to bite.

“Advertising revenue is likely to take a knock through and investors are running scared of any stock that relies on the consumer,” she told Capital.com.

She also pointed out that the Joe Rogan controversy seems to be “firmly in its rear view mirror”, with the podcast business seemingly thriving.

“If Spotify can remain relevant, talked about and sought after then it will hang onto its value and over time investors will return,” she added. “There will be investors waiting for the dust to settle and for general confidence to return to markets before they consider buying the dip and others just waiting.”

Spotify stock forecast 2022: Where will the price go next?

The consensus sentiment for the Spotify stock was neutral, based on the views of 25 analysts compiled by MarketBeat, as of 21 July. Thirteen analysts considered the stock a ‘buy’, 11 a ‘hold’ and one a ‘sell’.

Their consensus Spotify share price forecast was that the price could more than double to $201.75 over the coming year.

The most optimistic SPOT stock forecast suggested it could even rise 202% to $300 over this period, with even the most pessimistic pencilling in an 11% increase to $110. 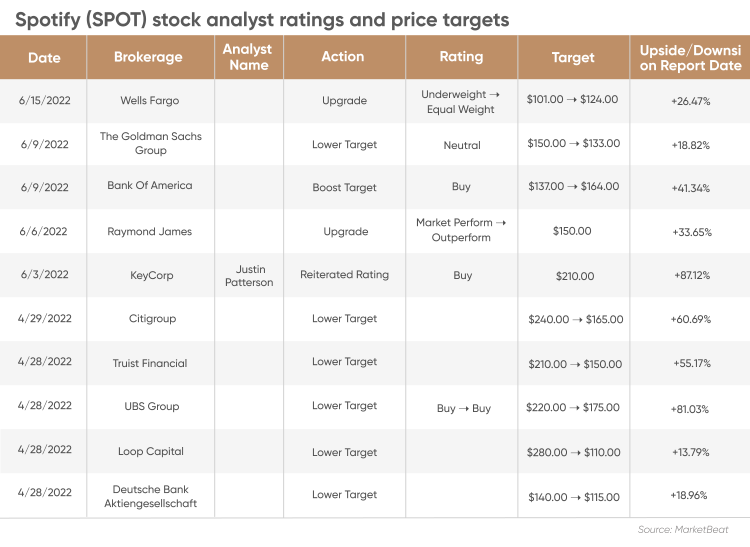 However, according to the algorithmic forecasting of Wallet Investor, as of 21 June, Spotify was a “bad long-term (one year) investment”, with the stock expected to fall to zero over the next 12 months.

The site’s Spotify stock forecast for 2025 was no better, expecting that the stock could still be at zero.

When looking for Spotify stock predictions, it’s important to bear in mind that analysts’ forecasts and algorithm-based price targets can be wrong. Predictions are based on making fundamental and technical studies of the SPOT stock’s historical price pattern, but past performance does not guarantee future results.

It is important to do your own research and always remember your decision to trade depends on your attitude to risk, your expertise in the market, the spread of your investment portfolio and how comfortable you feel about losing money. You should never trade with money you cannot afford to lose.

AMD stock forecast: Can the tech giant reverse the downtrend?