Shares of lithium miners in Australia – the world’s biggest producer of the metal – have soared this year. Lithium shortages and rebounding demand after the Covid-19 pandemic have sent the metal to record highs, giving a boost to mining stocks.

Here we take a look at the latest developments in lithium mining in Australia and the stocks of some of the country’s lithium miners.

What is lithium mining?

Lithium (Li) is a chemical element that belongs to the Alkali group in the periodic table.  The soft, silvery-white metal has excellent electrical conductivity, making it ideal for a wide range of applications, including pharmaceuticals and lithium-ion batteries for electric vehicles (EV) and consumer electronics, such as laptops and cellphones .

The process of extracting lithium from salars begins with drilling a hole and pumping lithium-rich saltwater from underground lakes to the surface. The saltwater will be left to evaporate in large basins or salars from eight months to three years.

Lithium mines in Chile, Bolivia and Argentina – known as the “lithium triangle” – produce the metal from saltwater or brine. Canada, the US and Australia produce lithium from hard-rock mining.

According to the US Geological Service, in 2021 Australia was the world’s top lithium producer, supplying nearly 49% of global output. Chile, which has the world’s biggest lithium reserves, was the second biggest producer.

In Australia, lithium mines extract the metal from hard-rock minerals called spodumene and petalite. Spodumene concentrate is a critical component in the production of lithium chemicals, which are used to make batteries for electric vehicles.

Lithium price began to rise in early 2021 as the global economy recovered from the effects of the Covid-19 pandemic. The lithium carbonate price soared to $57.5/kg in mid-February 2022, from $6.75/kg in early January 2021.

In February, Fitch Solutions forecast Australia’s lithium production to grow by 12% in 2022. Yet output growth was expected to slow to 10% year-over-year (YoY) by 2025, falling to 9% YoY through 2030. Overall growth was predicted to remain quite strong, with 11 new projects currently in the pipeline.

“Further projects are likely due to diversification efforts from battery and EV manufacturers as well as firms dependent on relevant inputs and policy support from the Australian government,” the firm said in the report.

Fitch predicted that big lithium consumers, such as Tesla (TSLA) and other battery and automakers, would enter into long-term contracts with Australian miners to secure supply, reducing their exposure to China across their supply chains.

“These dynamics are likely to promote competition as firms court smaller miners to lock down their supply and strengthen their bargaining position between firms in the future when seeking long-term supply contracts,” it added.

While Western Australia remains the country’s key lithium-producing region, Fitch said investors and lithium miners were looking to diversify reserves in the Northern Territory, New South Wales, Victoria and Queensland. Seven out of eleven projects currently announced in Australia are located outside Australia.

Lithium producers in Australia are among the companies benefitting from the elevated lithium prices.

According to Market Index’s data, as of 1 September, there were about 64 lithium miners listed on the Australia Stock Exchange (ASX). These are a mix of general miners and pure-play lithium miners.

For example, Rio Tinto (RIO) has the largest market capitalisation among lithium miners in the ASX, but the company does not only operate lithium mines. It also produces other metals, such as copper and aluminium.

Below are other Australian mineral miners that have seen their stock price rallying amid the lithium price surge.

Pilbara Minerals (PILBF) produces spodumene and tantalite concentrates from its flagship Pilgangoora Project. As of 1 September, the West Perth-based company had a market capitalisation on AUD10.82bn, ranking it third among the biggest lithium miners in Australia after Rio Tinto and Mineral Resources (MIN), according to Market Index.

The firm’s Pilngangora lithium tantalum project is the world’s largest independent hard-rock lithium operation, according to the company. The project has two processing plants: the Pilgan Plant on the northern side of the Pilgangoora area, and the Ngungaju Plant, which Pilbara Minerals acquired in June 2021 from another Australian lithium miner, Altura Mining.

Pilbara Minerals shares have gained 13.44% year-to-date (YTD), and returned 63.51% to shareholders year-on-year (YoY), according to the Market Index data, as of 1 September. The stock outperformed Australia’s benchmark ASX 200 (Australia 200), which has dropped 9% YTD.

At the time of writing (1 September), the consensus of 12 analysts polled by Market Index recommended a ‘strong buy’ for Pilbara Minerals in ASX.

Meanwhile, 10 analysts tracked by MarketScreener rated Pilbara Minerals ‘outperform’, with an average target price of AUD 3.50 – 3.58% lower than the closing price of AU$3.63 on 1 September. The highest price forecast for the stock was AU$5.60 and the lowest price target was AU$2.30. 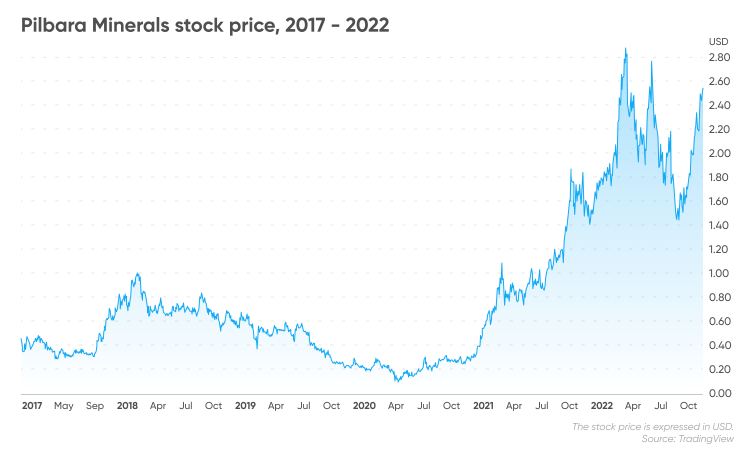 The company is the result of a merger of two lithium miners Orocobre Limited and Galaxy Resources. It has a market capitalisation of AU$8.72bn. 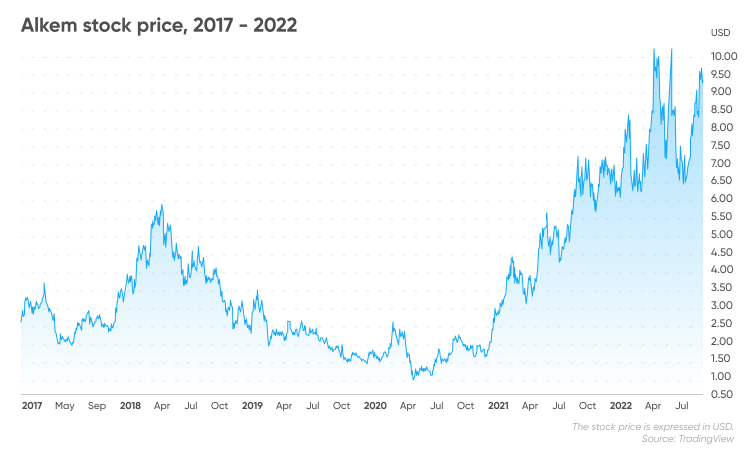 The company is upgrading the Mt. Marion facility to increase its output to 900,000 tonnes of spodumene concentrate a year by December 2022, from its original capacity of 206,000 tonnes a year. The expansion has received approval from its partner Ganfeng Lithium and MinrRes. The firm also operates iron ore mines.

As of 1 September, Mineral Resource’s stock value has increased 12.12% YTD and 18.25% YoY. The company’s stock was rated a ‘buy’ by 11 analysts polled by MarketScreener. 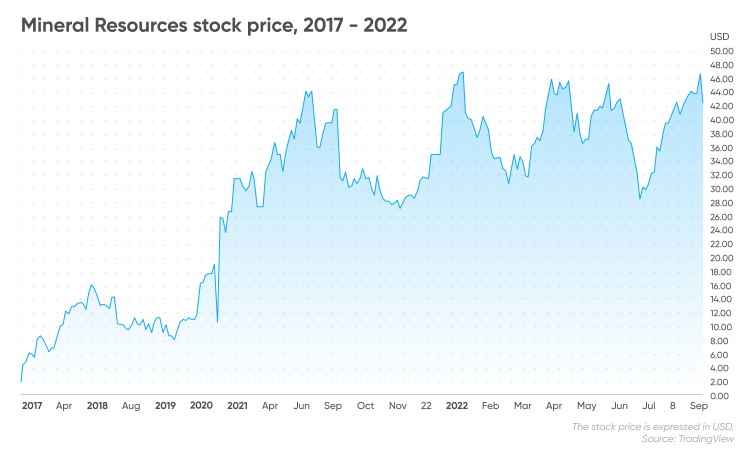 Note that analysts’ predictions can be wrong. Forecasts on the future of Australian lithium mining shares mentioned in this article shouldn’t be used as substitutes for your own research. Remember that past performance does not guarantee future returns.

Always conduct your own due diligence before trading, looking at the latest news, technical and fundamental analysis, and analyst commentary. And never trade money you cannot afford to lose.

Lithium price forecast: Will the price keep its bull run?

Capital.com Lithium Miners in Australia | Everything You Need to Know