By Piero Cingari and Neil Dennis

It's time to learn about investing during a recession. The signs are there: the dollar stands at a 20-year peak as investors seek havens. The S&P 500 is at a year low around the 4,000 mark, albeit this is nowhere near its pandemic low of 2,192 hit in March 2020. And indeed, this leads us to one of the first lessons of investing during a recession:

A recession does not always lead to a market dip
S&P 500 price-chart (log scale) since 1970: red areas indicate a US recession

As an increasing number of analysts predict a bleak economic picture in 2022, what else can we learn from previous recessions about what is likely to happen in financial markets in the coming quarters?

In this article we'll examine the tell-tale signs of looming recession. We'll look at which of the world's major economies are likely to be hardest hit and those that might escape the worst effects. Then we'll come to the various strategies which could be used for investing during different kinds of recession.

We're not officially there yet: what is recession?

A recession is broadly a period of declining economic activity where a nation's gross domestic product shrinks rather than growing. Typically, a recession is officially recognised as occurring after two consecutive quarters of economic decline.

The worst recessions in history have often been global, but linked to the decline of whichever is the most powerful economy at the time. Thus, the Great Depression of the 1930s was linked to the Wall Street crash of 1929 and the subsequent collapse of the US economy. Recession spread throughout the world as demand in the US for foreign imports dried up.

Five of the worst recessions in the last century

However, market euphoria swiftly gave way to an unavoidable shift in policy as inflation surged to four-decade highs by the start of 2022.

The current global energy crisis was exacerbated in late February by a confrontation between Russia and Ukraine, with oil prices surpassing $100 per barrel.

The Federal Reserve (the US central bank, aka "the Fed") announced its first 25-basis-point (0.25%) rise in interest rates and a strategy to reduce its $9 trillion balance sheet at its March meeting, which will be followed by another 50-basis-point hike in May and the promise of further hikes later in the year.

In early April, the US Treasury yield curve inverted, with the 2-year yield topping the 10-year yield. Over the last 50 years, this situation has always predicted a recession in the United States.

Meanwhile events in China reinforced worries of a global recession, as Chinese industrial and service activity fell to the lowest levels since March 2020 owing to anti-Covid restrictions in the country.

Consumer and business confidence quickly eroded across the European Union and the United Kingdom as a result of rising input prices, geopolitical fears over the Russia-Ukraine war and China's sudden drop in economic activity.

According to an intriguing insight from the National Bureau of Economic Research (an influential US think-tank), whenever inflation has climbed above 5% when unemployment is less than 4%, as the US economy is presently witnessing, a recession has always followed within the next 8 quarters.

Historically, each recession had its own unique causes, such as high interest rates or inflation, an oil crisis, a stock market crash, or a combination of these. Investing during a recession is not simple as each recession is different.

Which major economies will be hardest hit?

The impact of China's zero-tolerance stance on Covid-19 is likely to have far-reaching effects on economies across emerging markets in Asia. The economies of Australia and New Zealand are also exposed due to their weight of trade with the Chinese.

Many factories and ports in the Chinese cities forced into lockdown are closed – and when they do re-open, the country faces months of supply chain disruptions as they attempt to rebuild inventories.

April's purchasing manager index (PMI) data provided an insight of what's to come in China as the index of services fell to 36.2 from 42 in the prior month – the second weakest reading on record – while the manufacturing index slipped to 47.4 from 49.5. An index below 50 indicates economic contraction.

"The signals from the PMIs point to a sharp decline in Chinese economic activity in April, reinforcing our conviction that China is now staring a recession in the face," said Craig Botham, chief China economist at Pantheon Macroeconomics in a recent note.

The eurozone, meanwhile, is dogged by its exposure to the Russia/Ukraine conflict, and also – like China – by its high proportion of imports and exports compared to GDP. Germany, the main power behind the eurozone economy, looks close to sliding into recession as industrial production slumped in March, while more forward-looking measures such as PMI and IFO business sentiment surveys indicate recession could start in the second quarter.

It's looking like very few. Some of the economies that are more self-sufficient – whose economic growth rate relies less on trade – might avoid a recession.

But this really only leaves the US, whose consumption- and investment-based economy isn't slowing to the same extent as the eurozone.

Granted, the US posted an annual GDP rate of -1.4% in the first quarter, but recent PMIs showed manufacturing rising to a healthy 59.2 in April from 58.8 in March and services at 55.6, down from 58. So, it looks as though the US might avoid an officially recognised recession.

Chris Williamson, chief business economist at S&P Global – which publishes the PMI surveys, said: "Alongside the acceleration in manufacturing growth, the sustained solid performance of the service sector points to [US] GDP growth returning in the second quarter."

What's my strategy for investing during a recession?

Historically, each phase of economic recession has had significant implications for the performance of various asset classes.

We discovered some intriguing facts on cross asset performance by analysing all recessions that have occurred in the United States since 1971 when the Bretton Woods agreement – that in 1944 pegged other nations' currencies to the gold-linked dollar – was abandoned, opening up gold and foreign exchange markets to float freely.

Cross assets performance during a recession 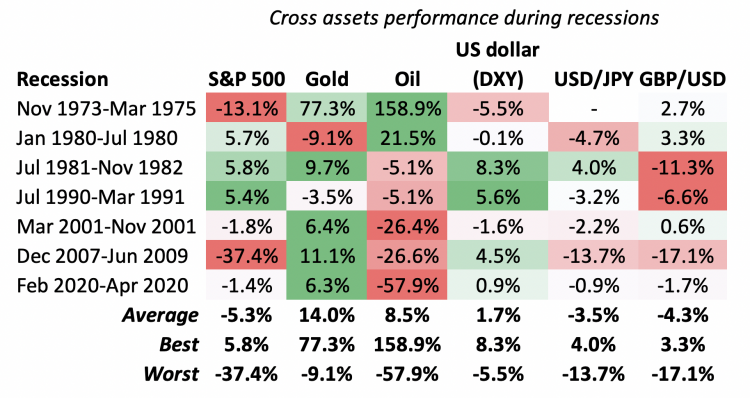 Investing in the S&P 500 during a recession

In the last seven recessions, the S&P 500 had an average negative return of 5.3%, and in four out of the seven times the index lost its value during the downturn phase.

However, the index delivered a positive return in three episodes (1990s recessions and early 1990s), with an average performance of 5.6%.

The S&P 500 had its worst performance during the 2008 recession, when it lost more than a third of its value.

During the most recent Covid recession in 2020, the S&P 500 index sank in March but swiftly rebounded by the end of April.

In general, a recession does not always result in a negative performance for the S&P 500 index, a sign that the market tends to anticipate the negative consequences of a recession in the months preceding its arrival.

How to trade commodities (gold and oil) in a recession

Gold and oil tend to exhibit opposite behaviors during recessions. During the two recessions of the 1970s, which were accompanied by two global oil crises, the oil market delivered astonishing gains.

Except for those two situations, oil has always declined throughout the last five US recessions, with a -24% average return.

The reason is that when recession generates an increase in unemployment and a reduction in household incomes, global oil consumption falls pushing oil prices down.

Gold, on the other hand, tends to fare well during a recession. As a result of economic mistrust, investors seek safety in precious assets such as gold.

Gold particularly shines when the Federal Reserve loosens its monetary ties, cutting interest rates during a recession to revamp investment and consumption.

During the previous seven recessions, gold provided a positive return on five of seven occasions, for an average of 14%. But in the other two recessions, gold fell: there are no guaranteed safe positions to take when investing during recessions.

Investing in a long gold/short oil strategy might therefore be profitable during a recession: but if there was no impact on demand, or if there were an oil crisis, such a plan might lead to significant losses.

chart showing ration between gold and oil during recession

Investing in forex during a recession

The US dollar index (DXY) had a modestly positive average return in all of the post-1971 recessions, with no significant drops.

Increased demand for bonds, such as US Treasuries, which are regarded as one of the best safe haven investments during periods of economic downturn, tends to boost currency flows towards the greenback.

The dollar is also itself a typical safe-haven asset, rising in value during periods of economic uncertainty and risk aversion.

However, the Japanese yen has outperformed the US dollar (USD/JPY) during dowturns, with an average return of 3.5% in the last six recessions.

The British pound, on the other hand, underperforms in the phases of a recession, with an average negative return of 4%. The pound is in fact a risk-sensitive currency that tends to rise during periods of global economic expansion, the polar opposite of a recession.

The GBP has lost value four times in the previous seven recessions, and it lost 17% versus during the 2008-2009 recession.

It should be borne in mind that what happened in the past is not in any way guaranteed to happen again in future, and indeed it's not yet clear that a recession is happening. Nonetheless the lessons of history are worth remembering.

Mayday! Hopes for a soft landing fade: markets in focus

Capital.com Investing during a recession: Key takeaways and possible opportunities