Powered by the Ethereum blockchain, Gods Unchained is a free-to-play digital trading card game. Users can purchase, sell or trade fantasy cards and earn rewards by participating in duels.

Fantasy cards can be bought and sold through Immutable X, the game studio behind Gods Unchained, or on the TokenTrove marketplace. According to the Gods Unchained’s whitepaper, their online marketplace offers full digital ownership of in-game items through an ERC-721 token standard, concomitant with the ability to embed such items into third party games.

What is Gods Unchained?

GODS is the ecosystem’s native token. It enables players to purchase and sell Gods Unchained NFTs. Importantly, the fantasy cards represent actual tokens and can be traded as such. The Trial of the Gods set contains the following cards:

There is a finite amount of Trial of the Gods cards. Each one possesses a rarity score, which is displayed on the coloured crystals on either side of a card’s nameplate. For example, purple coloured crystals represent Epic cards.

It’s worth noting that 23% of all Genesis cards, a limited edition set of 380 cards, are classed as rare. Also, Gods Unchained added an additional Sanctum feature to gameplay in 2020, which offers players five side-decks.

In total, 34% of all GODS tokens are reserved for the play-to-earn rewards pool. Meanwhile 20.5% of all tokens have been set aside to fund community engagement ventures. Users can earn rewards through the staking rewards pool.

The number of tokens staked is measured by the lowest amount held by a user in their Immutable X account during the seven day reward interval period. In addition, GODS token holders can also vote on proposals through governance processes.

This jump could be somewhat attributed to GODS being listed on Coinbase just a day prior to achieving its all-time high. On 8 December 2021, Coinbase announced that it will be accepting inbound transfers of GODS to Coinbase Pro. However, Coinbase only accepts ERC-20-compatible GODS tokens. 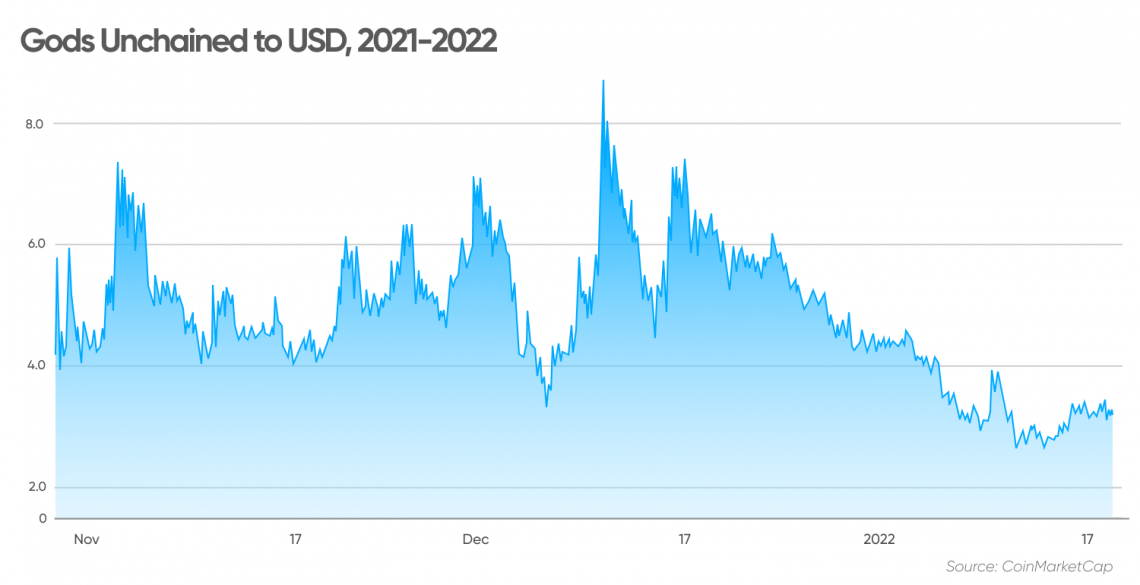 GODS rallied again a few days later, moving closer to a $8 level on 17 December at $7.3758. This rally coincided with Gods Unchained hosting an AMA on SushiSwap that same month.

The GODS price has since consolidated and is currently (19 January) trading within the $2 to $4 range. The blockchain-powered game has a 30-day sales volume of $8.47m, with more than 23,000 traders having bought or sold Gods Unchained NFTs in upwards of 1.49m transactions, according to data from DappRadar.

GODS is currently (19 January) trading at around $3.18. It ranks 480th in the list of cryptocurrencies by market capitalisation at $75m, according to CoinMarketCap.

Technical analysis provided by CoinCodex shows that short-term sentiment on GODS is bearish, with 4 indicators displaying bullish signals compared to 14 bearish signals, at the time of writing (19 January).

The daily simple and exponential moving averages are giving sell signals, according to data from TradingView, while the relative strength index (RSI) stands at 41, as of 19 January. An RSI reading of 30 or below indicates an oversold or undervalued condition, while a reading above 70 would suggest the asset is becoming overvalued or overbought.

Close to half a million users

In September 2019, Immutable X raised $15m in a series A funding round led by Naspers Ventures in order to develop the game. Gods Unchained has since amassed over 450,000 users - 50,000 of which are weekly active users.

In other Gods Unchained coin news, there are over 13 million Gods Unchained NFTs. Since March 2021, the project has seen more than $25m worth of assets being traded between users on Immutable X. At the start of 2020, the project had 100,000 registered players. That’s a 350% increase in just over two years.

A major plus for the Gods Unchained game is that its project consists of 50 team members, some originating from top tier companies such as Goldman Sachs (GS) and Riot Games. The team is led by Chris Clay, former game director of Magic, who has several years’ experience creating game systems. Gods Unchained has hosted weekly play-to-earn events, which have boosted the project.

“Despite reaching an all-time high recently on 10 December 2021 at $8.83, GODS is currently hovering around the $3 range. However, I believe it could reach $4 by the end of February 2022 as adoption increases for blockchain-powered games and new card sets are introduced to the Gods Unchained ecosystem.”

A risk for the project lies in the server outages that can be inherent with triple-A games, leading Gods Unchained to rearrange its backend data through a 0.42 game update enacted at the end of 2021.

A number of Reddit community threads have arisen in light of Gods Unchained server outages on the game’s pre-built decks.

In terms of a Gods Unchained crypto prediction, algorithm-based forecasting service Wallet Investor gave a negative GODS/USD outlook. Based on historical data, Wallet Investor estimated the price rising to $2.948 by February 2022, reaching $0.118 in January 2024 and hitting $0.116 by January 2025.

While the Gods Unchained price prediction for 2030 is not yet available, Digital Coin Price suggested it could be $14.09 in December 2029.

Read more: Bitcoin analysis: Where is BTC heading in 2022?