FuelCell Energy stock forecast for 2021: is a hot air balloon ready to pop?

In less than four months the price of FuelCell shares has multiplied by more than 10 times. President Joe Biden’s win caused a rally in clean energy stocks since he promised throughout his campaign that he will spend billions in pushing the United States towards environmentally-friendly energy sources.

As a result of this boost, the market capitalisation of this money-losing company with less than $100m in revenues jumped to nearly $10bn at one point, while its valuation has nearly halved since that February 2021 peak. It is still enjoying a remarkably stretched market cap of $5bn, despite the fact that revenues have continued to decline year over year.

Meanwhile, the company posted a wider-than-expected loss during its first fiscal quarter of 2021, which caused a single-day correction, as market participants seem to be increasing their level of scrutiny for firms in the clean energy space after recent developments related to one of FuelCell’s rival – Plug Power (PLUG).

Thia FuelCell Energy share price forecast takes a look at the company’s fundamentals to see if there are merits to justify this incredibly stretched valuation. Only a few days ago, FuelCell’s rival PlugPower (PLUG) informed investors that it will be performing important revisions in its accounting that will have an impact on the company’s financial results covering 2018, 2019 and the first three quarters of 2020 as a result of certain practices that have possibly misstated the true financial picture of the firm.

The combination of a market-wide drop in equities derived from an uptick in US Treasury yields, along with this sector-specific news seems to have reversed the latest uptrend of clean energy stocks, with most exchange-traded funds in the space swinging to year-to-date losses during the period after posting double-digit gains during the first couple of months of 2021.

Meanwhile, analysts’ FuelCell energy stock predictions seem to have also been affected by the company’s latest financial report, which covered the first quarter of its 2021 fiscal year, as the firm reported wider than expected losses of $0.08 per share vs. $0.04 per share the market had expected for the period.

Net losses landed at $46.76m during the three-month period, representing a 14 per cent jump compared to the same period last year, while revenues declined 9 per cent at $14.88m.

By the end of January 2021, the firm had $210m in unrestricted cash while its long-term debt currently sits at around $110m. Interestingly, Plug Power posted negative gross profits during this quarter, meaning that the firm’s revenues were not sufficient to cover the direct costs of rendering the firm’s services. JP Morgan’s analyst Paul Coster referred to this stock in an interesting way after the latest financial report was released, calling FuelCell a “speculative hydrogen pure-play stock”, meaning that the investment bank acknowledges the highly volatile nature of this company as it lacks the results and performance to justify an investment.

Simply put, buying FuelCell at this point is practically gambling unless you can predict the future, since, from a purely fundamental standpoint, the stock has nothing to show up for to justify its current valuation.

Reinforcing this particular view, FCEL’s revenues have dropped from $123m in 2011 to nearly $70m by the end of its 2020 fiscal year, while its losses have continued to expand despite constant claims about hydrogen fuel cells possibly being the future of energy.

Sure, the firm has hundreds of patents that could possibly justify a portion of its valuation, but keep in mind that, in the past nine years, the firm has not been able to monetise any of these patents and that should be a concerning factor for any investor.

So, is President Biden’s supportive stand towards clean sources of energy enough to justify a $5bn valuation for a company generating less than $100m per year in revenue and almost $100m in losses? 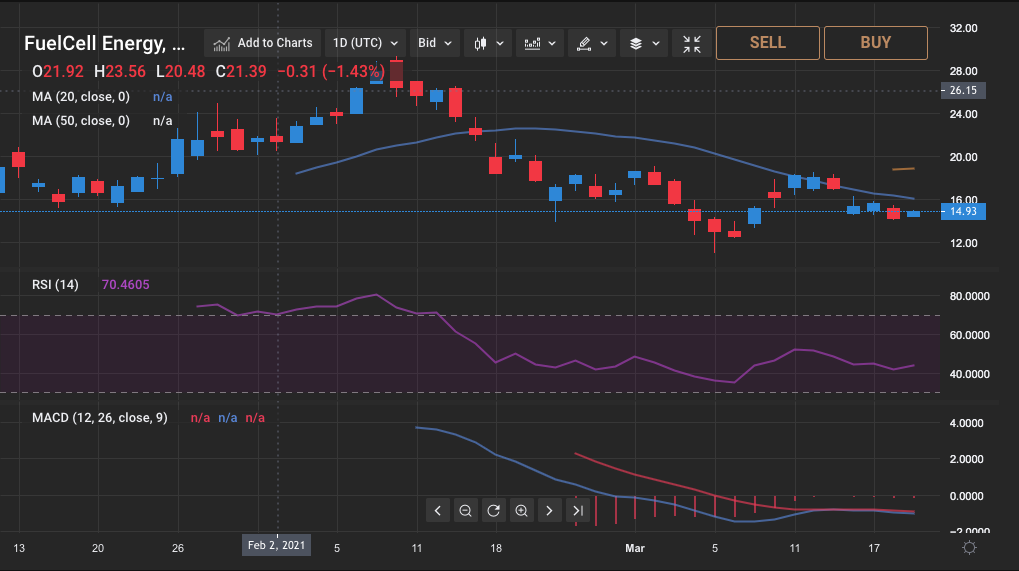 From a purely technical standpoint, we have an RSI submerged in negative momentum territory at 43 and the same goes with the MACD.

Meanwhile, the 20-day moving average has just plunged below the 50-day marker, also known as a death cross, which reinforces a bearish FCEL forecast with a short-term target at $11 per share – the stock’s latest low.

Moreover, if the situation were to get worse, the $10 per share threshold could be the next support to watch and then nothing would stop bears from plunging the stock to the $6 – $7 area if the downtrend continues.

Data from MarketBeat indicates that two out of the five analysts covering the stock are currently rating it a sell, with no bulls in sight.

Notably, the 12-month consensus price target is currently sitting at $8.5 per share – representing a 43 per cent downside potential based on Friday’s closing price.

Recently, Coster – the JP Morgan analyst mentioned earlier – lowered his price target for the stock from $10 to $9 while reiterating his sell rating.

This move contradicts that of Canaccord Genuity, with the firm recently upping its price target to $15 per share – almost twice their previous forecast of $8.5 per share – while reiterating their hold rating. Based on Coster’s comments, it seems evident that Wall Street is not considering FuelCell as one of the most likely candidates to take the lead in the hydrogen fuel-cell market.

Meanwhile, if the situation with Plug Power’s accounting turns out to be more concerning than expected, chances are that this could drag not just PLUG’s share price but also its rivals stock valuation as market participants could be more worried about how transparent these reports have been in an industry that is quite new and sometimes hard to assess.

According to the latest FuelCell rating from Zacks the stock is not the best option to buy right now. Their consensus estimate indicates the stock as a sell.

Despite the increasing interest in alternative energy sources and the fact that fuel cells are considered more reliable if compare them to solar or wind energy, and offering less carbon footprint compared to traditional fossil fuel-based generators, FuelCell Energy seems not in the best shape to lead the space. Operating for decades, it has not generated free cash flow or reported a profit for more than 20 years.

Although FuelCell does not give us many reasons to believe in its bullish movement by the end of 2021, it can still deliver some great opportunities for traders. The stock’s volatility makes it a good option to trade with contracts for difference. Choosing CFDs you can speculate on any stock’s price swing, be it an upward or a downward movement. Track the FCEL stock price live on our interactive chart and trade FuelCell Energy with CFDs at Capital.com.