August has been a choppy month for the US stock market thus far as the S&P 500 has shed most of the gains it saw in the first few days of the month.

Chatter within the Federal Reserve about what could be the beginning of a widely expected tapering of the central bank’s multi-billion asset purchase programme has been the leading cause for this choppy performance, while tumbling Chinese stocks have also added some volatility to the markets.

Identifying what are the “best shares to buy now” has never been an easy task, as financial markets are too volatile to label any stock ‘the best’ over a long term. However, you might want to take a closer look at our list of top five most-traded stocks on Capital.com (as of 24 August 2021) to know what stocks were trending among traders at the end of summer.

These five names are among the most traded within the Capital.com platform – and not for no reason, as they display the kind of robust fundamentals and growth prospects that make them stand out from the crowd.

Join us as we dig deeper into these companies as below to present the arguments that support investors' interest in these stocks. 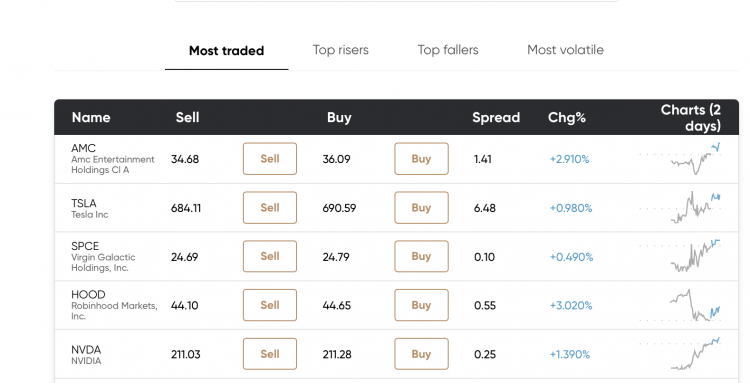 Making stock market predictions is not what we do, though we do analyse what the market is doing and how it has performed. Here we analyse why the following five made the list of the most-traded shares in August 2021.

This remarkable performance was driven primarily by increases in two of the company’s largest, top-line components: a 35% increase in Data Center revenues and an 85% jump in the Gaming segment. Meanwhile, its smaller segments – such as Original Equipment Manufacturer (OEM) and Professional Visualisation – more than doubled their figures compared to fiscal Q2 2021. 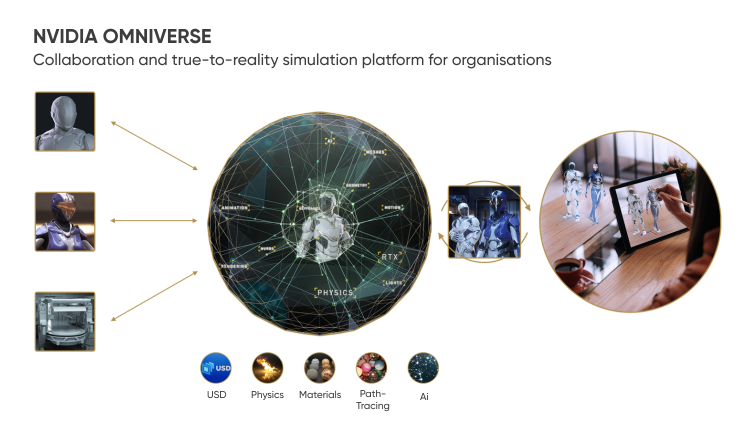 Moreover, the company recently announced that it has stepped into the up-and-coming metaverse market after launching a platform called the Omniverse, an ecosystem on which developers will be able to design and launch virtual worlds for consumers to interact.

“We continue to like the Nvidia story and see the company as the best-in-class artificial intelligence (AI) play, with growth vectors into next-generation networking/data processing unit (DPU) adoption and early days of autonomous driving software (S/W) kicker,” commented Hans Mosesmann from Rosenblatt Securities following the release of this upbeat report from NVIDIA.

The combination of a robust balance sheet, strong past performance and attractive growth prospects makes NVIDIA a stock to watch after this upbeat report.

Despite the short-lived drop Tesla stock experienced a few days ago amid news of an investigation from the National Highway Transportation Safety Administration (NHTSA) that will be targeting the firm’s autopilot feature, the price of its shares has recovered following the unexpected launch of the Tesla bot.

This humanoid robot, which was presented by the company’s founder and CEO, Elon Musk, last Thursday, is designed to help people in performing “dangerous and repetitive tasks”. 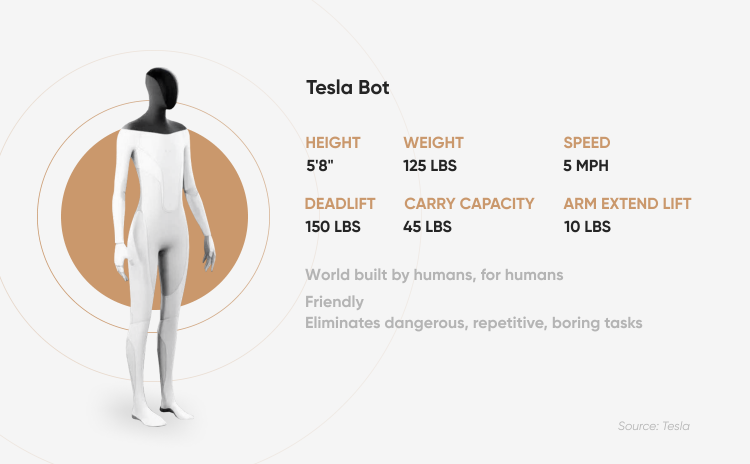 Even though the company’s shares initially reacted negatively to the news as they closed Thursday’s session with a 2.3% loss, they have since moved higher, both on Friday and today.

Daniel Ives, Wedbush managing director and senior equity research analyst, qualified the Tesla bot as an “absolute head-scratcher”. He showed concerns about the implications of this announcement on Tesla’s share price at a point when the company is dealing with mounting regulatory scrutiny.

Robinhood shares have been on a downtrend ever since the stock reached its post-initial public offering (IPO) high of $85 per share. Meanwhile, the price action has already filled the bullish gap left behind on the day that the stock unexpectedly surged to those levels.

This drop was partially influenced by the company’s downbeat comments during its latest quarterly report as the management team warned investors about “seasonal headwinds” that may affect the performance of the business during the third quarter of 2021.

“For the three months ended 30 September 2021, we expect seasonal headwinds and lower trading activity across the industry to result in lower revenues and considerably fewer new funded accounts than in the prior quarter,” the management team stated in the company’s second-quarter results. 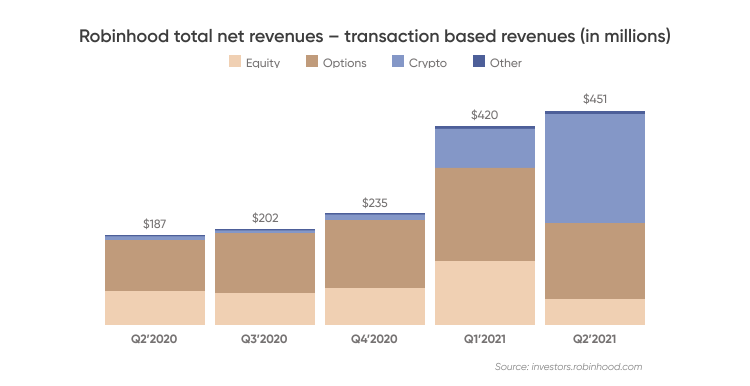 A fading pandemic tailwind and the latest decline in the price and trading volumes of dogecoin (DOGE) – one of the cryptocurrencies currently supported by the Robinhood platform – may contribute to this slowdown. Investors seem to have been disappointed by the announcement as shares slid more than 10% on the day the report came out.

The price of AMC stock has been on a downtrend since the stock hit its intraday all-time high of $72.6 per share on 2 June. It is currently trading at 49% below those levels.

Even though shares initially climbed on the day the company reported its financial results for the second quarter of 2021, the session ended with a 6% retreat in the stock price.

For Q2 2021, the company reported revenues of $444.7m, resulting in a significant improvement to the $18.9m it brought during the same period in 2020 amid pandemic-related theatre closures.

This top-line result has far exceeded the consensus estimate of $382.1m from analysts for the period as compiled by Refinitiv.

Since the report came out, trading volumes have remained steady and below their 10-day average. The stock has been progressively climbing, although it remains on a downtrend. 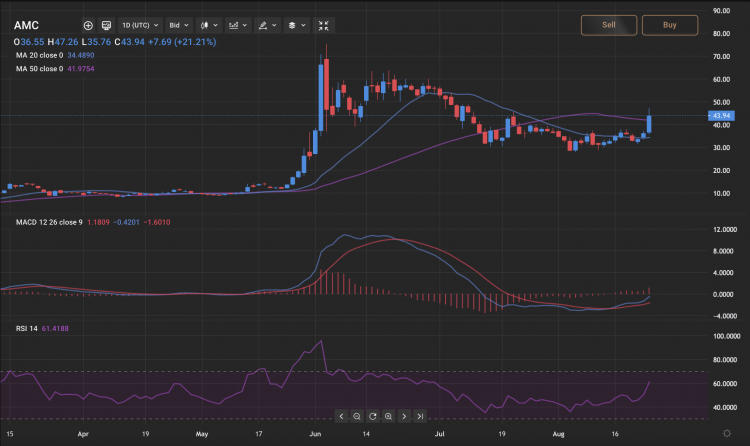 Moving forward, unless the stock manages to post a higher high in the daily price action, the directional pattern points to further downsides ahead for AMC Entertainment shares.

That being said, momentum indicators are sending buy signals as the Relative Strength Index (RSI) has risen above 50 while the MACD has just crossed the signal line, accompanied by increasingly higher positive momentum readings.

The price of Virgin Galactic stock has experienced a significant level of volatility in the past few months as multiple events – including the approval of a licence to operate commercial flights to space by the US Federal Aviation Administration (FAA) and a successful test flight that carried Sir Richard Branson as a passenger.

Moreover, the company reported its financial results for the second quarter of 2021 and announced that it has now reopened ticket sales for new passengers, with nearly $82m in customer deposits. 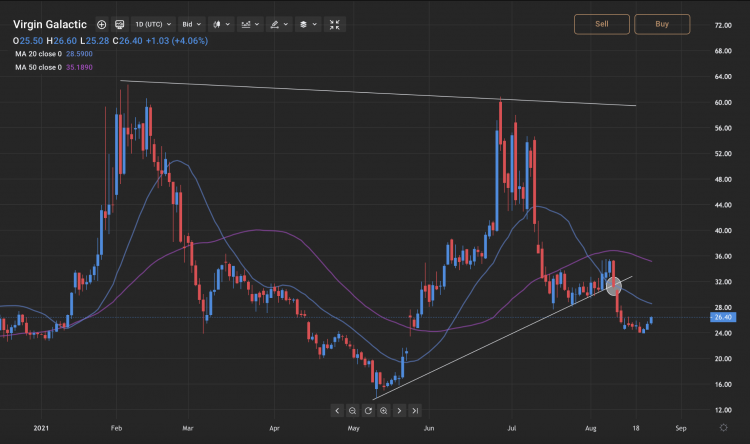 However, of all these events and announcements, the one that has had the most influence in the price has been the sale of $500m worth of common stock at a price of $49.2 per share. The sale, which took place on 9 July, immediately led to a 6.6% drop in the stock, followed by multiple other pronounced daily drops, including a 17.3% uptick on 12 July and a 12.4% slide on 14 July.

It is impossible to predict if the share price will recover to the levels preceding the offering, however the daily chart shows that the lower trend line of the symmetrical triangle pattern that had been forming in the past months has now been broken.

Keep in mind that even though these five stocks have performed quite well in the past and headed the list of most-traded shares on our platform, it does not guarantee positive returns in future. Even though their fundamentals appear to be robust they could still underperform the market as a whole or produce losses for investors due to increased market volatility.

We encourage you to do your own diligence on each of these names and make decisions based on your own views about their businesses. Note that trading stocks with contracts for difference, you can benefit from either market’s direction. Open a long trade if you believe the stock will go up, or go short if you believe it may go down. As a leveraged product, CFDs are designed to maximise gains. However, you should be aware of the high risk involved as the use of leverage also magnifies losses if the asset price moves against you.

Make sure you understand how CFDs work and do your own research before you start trading. Never invest money you cannot afford to lose.