But is there now a real crisis facing the euro? Has anything really changed this time? And what?

Setting the scene for a euro crisis

How long will Germany keep paying for the euro crisis?

Will the level last?

The euro is in crisis. You’ve heard that before, of course: for the last 20 years, we have heard a lot about how the euro is doomed, how it will never survive and how it is the dumbest invention ever.

None of these things have yet turned out to be true – apart from perhaps that last one.

But is there now a real crisis facing the euro? Has anything really changed this time? And what?

How the euro is doing against the dollar lately (EUR / USD):

The first thing to remember is that the euro is largely a political project, not an economic one.

As the economist Joseph Stiglitz, wrote, back in '20:

“Advocates of the euro rightly argue that it was not just an economic project that sought to improve standards of living by increasing the efficiency of resource allocations, pursuing the principles of comparative advantage, enhancing competition, taking advantage of economies of scale and strengthening economic stability. More importantly, it was a political project; it was supposed to enhance the political integration of Europe, bringing the people and countries closer together and ensuring peaceful coexistence.”

The problem is, that little of this has actually happened.

As a very crude example, we can see the disparities between how states act economically within the bloc, by looking at Target2 balances (basically, transfers between state central banks): 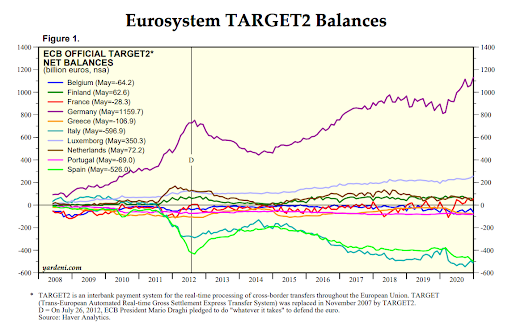 Without getting into the real specifics, this is basically how the eurozone ‘balances’ itself out.

But you can see one massive problem driving the inevitable euro crisis. Germany effectively finances the bloc, whilst Italy and Spain are massive net debtors.

This is hugely problematic, and a pretty much untenable situation in the long run.

If you recall, in 2009-12 there was a huge euro debt crisis, which led to massive austerity and countries requiring a bailout from the European Central Bank (ECB).

The underlying issues have not been rectified … and with Covid, there is now simply MORE DEBT in these countries and a worse fiscal position after huge government spending to cope with the dislocation in economic activity.

Now, I am sure you are aware of the major inflation crisis that’s occurring in many economies worldwide: in the euro zone, it’s arguably worse than anywhere else.

Just this week, the bloc published an inflation reading of 8.6%, while the German Producer Price Index (PPI) surged 33.6% in May!

Setting the scene for a euro crisis

But rate hiking in a currency union brings about some issues.

See, before the euro, countries would be able to lower or raise rates depending on their individual circumstances, creating fewer dislocations (basically, keeping their economy in a better equilibrium).

But the ECB imposes the same rate of interest across the entire bloc, meaning countries are less flexible in managing shocks to their economy.

The Target2 chart above shows part of the reason why Spain and Italy are in trouble.

The expected rate rise has led to eurozone bonds going a bit mad, and there is now a genuine fear of the bloc becoming fragmented.

Which in simple terms means the difference between German bond yields and Italian, Greek and other peripheral bond yields increasing massively. 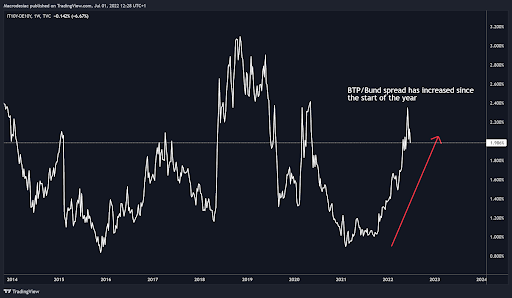 So the main problem with this spread increasing is that it creates a problem where monetary policy is no longer in sync across the bloc.

The ECB has to to do something about this situation. Generally they try to “jawbone” (make speeches) to talk the market back down.

Then ECB president Mario Draghi did this successfully in 2012 with his “whatever it takes” speech.

But I don’t think today’s ECB president Christine Lagarde has the same kind of pull as Draghi.

To try to close these spreads (something Lagarde kind of managed to do when Covid completely wrecked bond markets back in 2020), the ECB is looking at a tool where they sell German bonds to raise the yield and buy Italian bonds to reduce the yield.

Which to me feels like filling up a bucket with a hole in it.

Talking about it seems to have worked over the last week or so, since the spread is down a touch.

But if we think about what would happen if this system were imposed, the German Bundesbank would make losses whilst the Italian central bank would win.

How long will Germany keep paying for the euro crisis?

This might change how the German taxpayer might think about the eurozone, since it would be a situation where they are effectively bailing out another nation.

And the ECB has effectively classed Germany as a "donor", which in the mind of the German taxpayer means they ain’t gonna get their money back.

How things are said matters.

And if we look at how the EU has suspended the 3% deficit spending limit, this brings into question whether fiscal prudence is on the agenda, or if in 2024, the EU will be forced to introduce austerity again.

Similar to how they did 10 years ago.

I wonder how that’ll go down with voters.

These are the kinds of things we have to think about when looking at the macro and deciding on probabilities of trades going your way.

So let’s look at the history of the euro against the US dollar (latest Capital.com data). 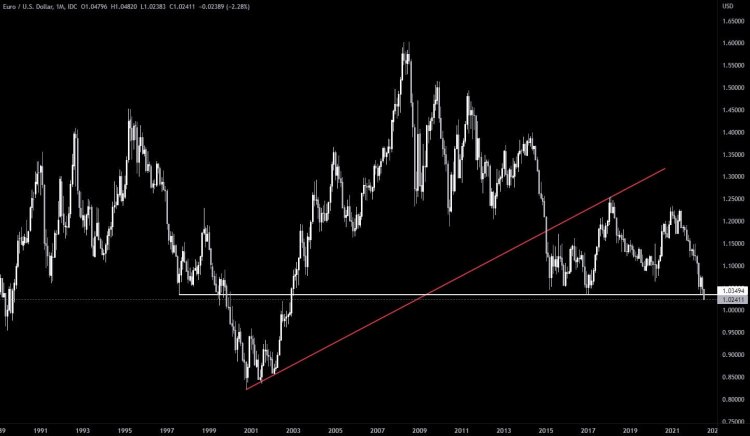 I’m not much of a technical analyst, but there’s a pretty key structure and a big level that has formed.

Will the level last?

But there is nothing to suggest that the euro looks healthy here.

Perhaps the gap in interest rates between the US and Europe will narrow, giving the euro a fighting chance.

But the US Federal Reserve doesn’t look to be stopping hiking any time soon. That leads me to believe that the potential for the dreaded parity is possible, where one euro buys you one dollar. It’s a plausible picture, considering the backdrop in Europe, the energy problems and the general malaise that has haunted the ECB for the last decade.

The signs are there of a euro crisis. Could we even see a breakup of the Eurozone?

I think it’s the most likely it has ever been.

What will end the US dollar (USD) bull run?