Coinbase IPO: another way for investors to profit from the crypto boom?

US-based cryptocurrency exchange Coinbase will make its much-anticipated debut on the public market via a direct listing on the Nasdaq stock exchange next week.

The company is going public at a time when cryptocurrencies are trading around record highs, with Bitcoin (BTC) having recently touched $60,000 and Ethereum (ETH) exceeding $2,000, boosting the attractiveness of the stock for investors.

Operating in such a hot sector, how much is Coinbase worth? And what are the opportunities and risks ahead that could have an effect on the share price?

In this article, we provide an overview of the largest cryptocurrency exchange, the key details of its stock market listing and how to buy Coinbase (COIN) stock as soon as the business goes public.

Brian Armstrong, formerly an engineer at Airbnb (ABNB), and Fred Ehrsam, previously a trader at Goldman Sachs (GS), founded Coinbase in 2012 to enable anyone with an internet connection to send and receive Bitcoin easily and securely through a simple and intuitive platform. Investors in the company include Y Combinator, an incubator that provided start-up funds, Andreessen Horowitz, Ribbit Capital, Spark Capital, Greylock and MUFG.

The Coinbase Pro trading platform directly integrates with more than 15 blockchain protocols, supports more than 90 cryptocurrency assets and offers a suite of subscription products and services.

As of December 31, 2020, Coinbase had approximately 43 million retail users, 7,000 institutional clients, and 115,000 ecosystem partners in over 100 countries. In the three months ended December 31, Coinbase had 2.8 million monthly transacting users, which was an increase of around 180% from the same period in 2019. 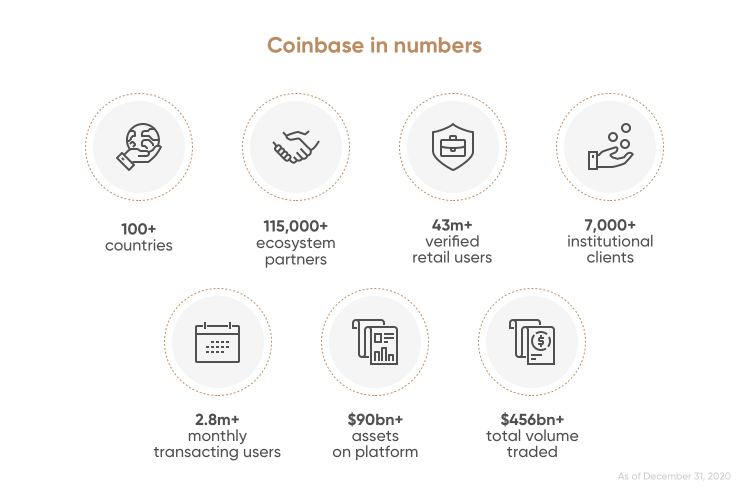 Many of Coinbase’s retail customers make their first cryptocurrency transaction on its platform and then transition to using its other cryptocurrency products for staking coins and tokens to earn more, for spending, earning savings rewards, and borrowing against their holdings. In 2020, an average of 21% of Coinbase’s retail investors also engaged with at least one non-investment product per quarter.

Coinbase provides hedge funds, money managers and corporations one-stop access to the cryptocurrency markets with its trading and custodial technology, which incorporates a robust security infrastructure. It also offers a marketplace with a deep liquidity pool for transactions. And it provides its ecosystem partners – developers, merchants and asset issuers – with a platform that enables them to participate in cryptocurrency networks, build applications leveraging crypto protocols, and securely accept cryptocurrency payments.

As of December 31, 2020, Coinbase’s users had traded over $456bn since its launch and stored over $90bn in assets, generating over $3.4bn in revenue. Its median quarterly trading volume increased from $17bn in 2018 to $21bn in 2019 and $38bn in 2020. The platform generates more than 96% of its net revenue from transaction fees from volume-based trades by retail customers and institutions.

The company said in its SEC filing: “We expect our customer base to grow alongside the ecosystem we serve as we continue to support more asset classes and add more products to our platform.”

“Our objective is to bring crypto-based financial services to anyone with a smartphone, a population of approximately 3.5 billion people today.”

Coinbase generates its revenues from transaction fees through:

The company’s growth strategy focuses on adding more customers and expanding its asset offering by extending support for cryptocurrencies, supporting new native blockchain protocol features, and investing in infrastructure and regulatory clarity for new assets to be represented as crypto assets. It also aims to continue forming partnerships to create more opportunities for customers to engage in cryptocurrency-based financial transactions, and develop its technology to enable ecosystem partners to better connect with customers and process transactions.

In 2019, the company launched its Coinbase Card debit card in partnership with Visa for customers in the UK and some in Europe, which allows them to spend their cryptocurrency assets at any merchant that accepts Visa.

In 2020, it launched support for post-trade credit, enabling institutional customers to instantly invest in cryptocurrency assets without pre-funding their trade.

Coinbase’s growth so far has come without it having to spend capital on sales and marketing – since it launched more than 90% of its retail users have found the company organically or through word-of-mouth. That gives the company the scope to attract more users through proactive marketing channels.

The company also aims to support the broader crypto economy by investing in companies and technologies through its venture capital division, Coinbase Ventures, which had invested in more than 100 companies as of December 31. According to the filing, the firm’s goal with these investments is to “foster the development and growth of the ecosystem, which we believe will in turn benefit Coinbase”.

What are the risks associated with investing in COIN?

Potential investors in Coinbase stock should keep in mind that the volatile nature of the cryptocurrency markets and fluctuating trading volumes present a risk that could have a substantial effect on the value of Coinbase shares.

Coinbase said in its filing: “A majority of our net revenue is derived from transactions in Bitcoin and Ethereum. If demand for these crypto assets declines and is not replaced by new crypto asset demand, our business, operating results, and financial condition could be adversely affected.”

The cryptocurrency space is also becoming increasingly competitive, with rival cryptocurrency exchanges such as Kraken and Gemini, as well as stock trading platforms like Robinhood and payment apps like PayPal (PYPL) and Square (SQ) also allowing users to buy and sell crypto assets.

Cyberattacks and security breaches, the evolving regulatory landscape and the potential for the company to lose a critical banking or insurance relationship could affect the business, the filing adds. The status of a particular cryptocurrency asset is subject to uncertainty that can affect trading, such as a recent legal case brought by the SEC against Ripple Labs, which prompted Coinbase to halt trading in the XRP coin.

Coinbase listing: everything you need to know

On April 1, 2021, it was announced that Coinbase’s direct listing date will be on April 14.

Rather than a traditional initial public offering (IPO), Coinbase is going public via direct listing, or direct public offering (DPO). The company will sell existing shares directly on the market, instead of using underwriters to price and sell new shares.

Coinbase will list on the Nasdaq under the ticker COIN. The company will sell around 114.85 million shares with its Class B shares, which hold higher voting rights, converted to Class A shares.

Coinbase (NASDAQ: COIN) has raised a total of $547.3m from 13 financing rounds, according to Crunchbase, the most recent of which was in 2018 and valued the company at $8bn. However, during the first quarter of 2021, private transactions were completed at $200-375.01 per share, with a volume-weighted average of $343.58 per share, Coinbase said in the SEC filing. That would put the Coinbase IPO valuation at $39.46bn, and give the company a market capitalisation of around $100bn.

By taking the direct listing route, the Coinbase IPO price will not be set in advance but will be determined by investors when the stock hits the market.

Gil Luria, director of research at D A Davidson, the first institutional investor in Coinbase in 2013, has initiated coverage of the company with a buy rating. Luria projects that the company will generate $2bn in revenue in 2021 based on the burst in cryptocurrency activity during the first quarter, which he calls conservative estimate, and set a price target of $195 per share based on a starting point of 20 times revenue. He expects trading on the stock to be volatile on April 14, given the enthusiasm among investors for owning a piece of Coinbase.

Read more: Kraken IPO: what we know a year ahead of a highly-anticipated IPO