Semiconductor manufacturer Broadcom Inc (AVGO)’s stock price has been under-pressure in the past month as monetary tightening policy in the US and elsewhere intensified worries about recession.

The recent sharp decline in the AVGO stock price came as the semiconductor giant could move ahead with the acquisition of cloud service provider VMware (VMW).

As of 11 August, the stock has recovered to $550.41 a share from $476 on 5 July, the lowest price this year.  Will Broadcom keep the momentum in its recovery, and what's the outlook of its proposed deal with VMware?

We look into the company’s price history, recent news and other factors that may shape a Broadcom  stock forecast.

Broadcom (AVGO) is a global technology company that designs, develops and sells semiconductors and infrastructure software.

What is your sentiment on AVGO?

Give AVGO a try

AVGO's stock price struggled through a volatile ride in 2020 amid the Covid-19 pandemic and the escalating US-China trade war, which impacted the semiconductor industry.

The stock gained more than 38% in 2020 despite it briefly plunged to $192 a share in mid-March during market sell-offs at the onset of the pandemic. 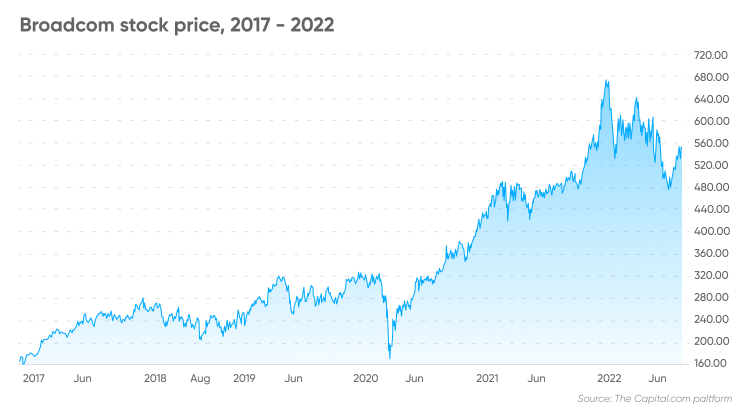 The company’s robust financial performance in 2021 was one of the drivers for its stock’s rally. In the 2021 fiscal year, it booked total revenue of $27.45, a 15% increase from the year-ago period.

In early 2022, the stock registered strong performance, trading at $670 in early January. However, the US Federal Reserve’s (Fed) monetary tightening with its aggressive rate hikes to curb inflation and fear of recession started to put pressure on chip stocks.

The Broadcom stock price has been in choppy trading this year, but mostly on the downtrend, hitting several lows. It dropped to $554 level in May before briefly recovering to $608 in May.  The stock price continued to fall, hitting the lowest yearly price of $463 on 5 July.

VMware bid likely to go ahead

On 26 May, Broadcom announced plans to acquire VMware (VMW), a leading provider of multi-cloud services, in a deal worth $61bn (£50bn). Under the proposal, AVGO will acquire all the outstanding shares of VMware in a cash-and-stock transaction and assume $8bn of its net debt.

Approximately 50% of VMware’s shares will be exchanged for cash consideration and 50% exchanged for Broadcom (AVGO) common stock.

The agreement also provided a 40-day “go-shop” period in which VMWare and the Board of Directors could solicit alternative proposals. The period ended on 5 July 2022.

In its statement to the US Securities and Exchange Commission (SEC) on 6 July, the company said: “VMware’s Board of Directors continues to believe that the transaction with Broadcom is in the best interests of VMware and its stockholders.”

VMware did not disclose whether it received any alternative proposals during the “go-shop” period.

The transaction could close in Broadcom's fiscal year 2023, subject to regulatory approvals and other customary closing conditions, including VMware shareholder approval. There is no set closing date for the transaction.

“By adding VMware, we will bring significant scale to Broadcom's software business and reinforce our position as a premier provider of mission-critical platform solutions to enterprises globally,” said Broadcom’s President Director and CEO Hock Tan in the earnings call on 2 June.

Tan added that the semiconductor giant has set a target for VMware to contribute approximately $8.5bn of Earnings Before Interest, Tax, Depreciation and Amortisation (EBITDA) once it’s integrated into Broadcom’s platform.

VMware was founded in February 1998 in Sunny, California, by five technologists: Diane Greene, Edouard Bugnion, Scott Devine, Mendel Rosenblum and Edward Wang. By the end of 1998, the company had 20 employees.

In 1999, VMWare launched its first product, Workstation 1.0, which allowed users to run multiple operating systems as virtual machines, all on a single personal computer (PC).

Tech giant EMC Corporation acquired VMWare in 2004 – a year after VMWare opened its first international office in Europe. The transaction was worth $635m.

In 2007, VMware moved its headquarters to the Palo Alto campus in Stanford Research Park. On 14 August of the same year, the company went public on the New York Stock Exchange (NYSE) at $29 a share.

In September 2016, Dell Technologies (DELL) acquired EMC Corporation, including its stake in VMware, for $67bn. Dell spun-off its 81% equity ownership of VMware in November 2021.

The solid consolidated revenue was supported by strong growth in both businesses. In the second quarter, Broadcom’s Semiconductor solutions segment recorded revenue of $6.2bn, which accounted for 77% of total revenue, up from $4.8bn year-over-year.

Its Infrastructure software segment rose to $1.87bn from $1.79bn a year ago. Broadcom generated $4.2 bn free cash flow and are expecting it to remain strong in the third quarter.

“Irrespective of what you might think of where we are in the semiconductor cycle today, I do want to reassure you that the fundamentals of our business, both in semiconductors and in software have never been stronger,” Tan said at the earnings call on 2 June.

Broadcom’s board also approved a quarterly cash dividend of $4.10 a share. It was paid on 30 June. The firm also approved a new share repurchase program of up to $10bn-worth of its common stock through 31 December 2023.

Upbeat outlook for the next quarter

Broadcom expected to book revenues of $8.4bn in the third quarter. Adjusted EBITDA was forecast at approximately 63.5% of the projected revenue. The company will announce the third-quarter results on 1 September.

Zacks analysts expected the company to post earnings of $9.62 a share in the third quarter, which would represent 38.22% year-over-year growth.  Zacks Consensus Estimate for revenue projected net sales of $8.41bn, up 24.01% from the year-ago period.

Broadcom was expected to earn $8.84 a share in the third quarter, according to analyst consensus estimates compiled by MarketBeat.

The macroeconomic headwinds and supply chain issues are likely to continue putting pressure on chip maker stocks and may be shaping AVGO stock forecast in the near future.

Meanwhile, the global semiconductor industry is forecast to grow by 10% in 2022 to over $600bn for the first time ever, but the growth slows from 25% in 2021, according to a report by Deloitte.

“We expect shortages and supply chain issues to remain front and centre for the first half of the year, hopefully easing by the back half, but with longer lead times for some components stretching into 2023, possibly well into 2023,” the report said.

The exit of one of Broadcom's executives also intensified the bearish sentiment. Thomas H. Krause, President of Broadcom Software Group, resigned from Broadcom effective 15 July, the company said in a filing.

Krause, who played a key role in Broadcom’s proposed VMWare acquisition, has assumed the role as CEO at the combined company of Citrix System (CTXS) and TIBCO Software following Citrix’s acquisition by Vista Equity Partners and Evergreen Coast Capital. Broadcom’s stock dropped around 3% on 11 July following the announcement.

“We think Broadcom will gain significant value from its acquisition of VMware.”
by Abhinav Davuluri, Morningstar

Morningstar raised its fair value for Broadcom to $624 a share following the planned acquisition of VMWare and to $645 for the combined company.

“Yet we think Broadcom will gain significant value from its acquisition of VMware. Should the deal close, our fair value estimate for the combined entity would be $645 per share, which reflects cost synergies we think Broadcom can extract as well as the fact that we think the firm is acquiring VMware at an attractive valuation,” said Abhinav Davuluri, Morningstar’s sector strategist, in their Broadcom stock predictions on 27 May.

A consensus rating of 26 analysts compiled by MarketBeat as of 11 August recommended a ‘moderate buy’ for the stock with four giving ‘hold’ ratings and 22 a ‘buy’. The analysts offered a 12-month Broadcom share price forecast at an average of $680.46, with a high price target of $780.00 and a low of $615.

Morningstar, MarketBeat, and TipRanks did not offer a long-term AVGO stock forecast.

Algorithm-based forecasting service Wallet Investor provided such projections using AVGO’s historical data.  In its Broadcom stock forecast for 2022, the site expected the stock to trade at $621.261 in December 2022, as of 11 August.

Note that analysts’ and algorithm-based price predictions can be wrong. Broadcom stock forecasts shouldn’t be used as a substitute for your own research.

Always conduct your own due diligence before trading, looking at the latest news, technical and fundamental analysis, and analyst commentary. Remember that past performance does not guarantee future returns. And never trade money you cannot afford to lose.