Brazil’s inflation rate cooled to an annual rate of  5.79% in December 2022 from April’s peak of 8.3% as recession fears eased oil and commodity prices, while the reduction in fuel tax helped to keep costs down. December’s inflation was also below 2021 inflation at 10.06%.

Falling inflation may bring a slight relief for President Luiz Inácio Lula da Silva who returned for a third term as Brazil’s president on 1 January 2023. Only days after his inauguration, thousands of supporters of former president Jair Bolsonaro stormed the presidential palace on 8 January, seeking to topple President Lula’s week-old presidency.

Bolsonaro lost the Brazilian general election in a nail-biting run-off in October 2022.

Inflation falling to single digits has given room for the Banco Central do Brasil (BCB), the country’s central bank, to ease its aggressive monetary policy tightening. BCB maintained the policy rate Selic unchanged in the December meeting at 13.75%.

High inflation has been part of the country’s economic history. So, will Brazil's inflation rate continue to decline to the central bank’s target in 2023? Read on as we look into the history of Brazilian inflation and the factors that may shape price growth.

Economists use the term inflation to describe the increase in the prices of goods and services over time. It also reflects the decline in the purchasing power of money. As a result, when prices rise, consumers can buy less with their money. The decline of buying power has a significant impact on the cost of living, resulting in a slowing of economic growth.

In Brazil, the inflation target is set by the National Monetary Policy (NMP). The NMP sets the year-on-year (YOY) inflation target for the Extended National Consumer Price Index (IPCA), as measured by the Brazilian Institute of Geography and Statistics (IBGE).

The inflation rate is the percentage change in the cost of the IPCA’s basket of goods and services over a given time period. The IPCA adjusts the average consumption habits of Brazilian families earning between 1 and 40 minimum wages per month. The basket includes transportation, food, education, clothing, housing and healthcare.

What is your sentiment on TSI?

Give TSI a try 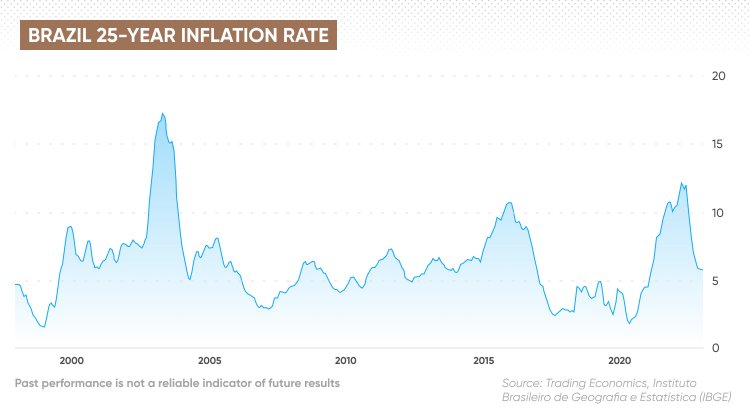 The 1990s hyperinflation forced consumers to rush to supermarkets as soon as they received their paychecks and spend their money before prices skyrocketed. Sometimes supermarkets would change the price tags three times a day, according to BCB’s account of the period.

According to the paper written by Miguel A. Kiguel and Nissan Liviatan, Stopping Three Big Inflations: Argentina, Brazil, and Peru, Brazil’s long history of inflation is rooted in large budget deficits and the growth of the public sector.

Fast-forward to 2020, the inflation rate in Brazil dropped to 1.88% in May 2020 during the onset of the Covid-19 pandemic. Lockdowns slowed the global economy and pushed down commodity prices, including iron ore and oil, Brazil’s main export commodities.

The annual inflation rate rose to 10.38% by January 2022 and continued to accelerate to peak at 12.3% in April. Inflation has gradually stabilised since then, falling to 8.73% in August as prices, particularly for transportation, continued to decline.

However, the inflation rate in Brazil still exceeded the 2022 inflation target of 3.5%. The stubbornly fast price growth prompted the BCB to hike the Selic rate by 50bps to 13.75% in August. BCB kept the Selic rate unchanged at 13.75% in the December meeting.

Health and personal care, as well as the food and drinks group, recorded the fastest price rise in December, which contributed to keeping Brazil’s inflation rate above BCB’s target of 3.25% for 2022.

Health and personal care prices gained the most by 1.6% boosted by the increase in the prices of personal hygiene, particularly perfume (9.02%), according to Brazil’s statistics office IBGE.

“Today’s data, where services and core components saw a pick up in price gains could delay BCB rate cuts guidance until a clear month-on-month downtrend emerges. Still, the bank may soon be in a position to loosen monetary policy, kicking off its easing cycle in Q2 with about 200bps in cuts expected over the course of this year.” 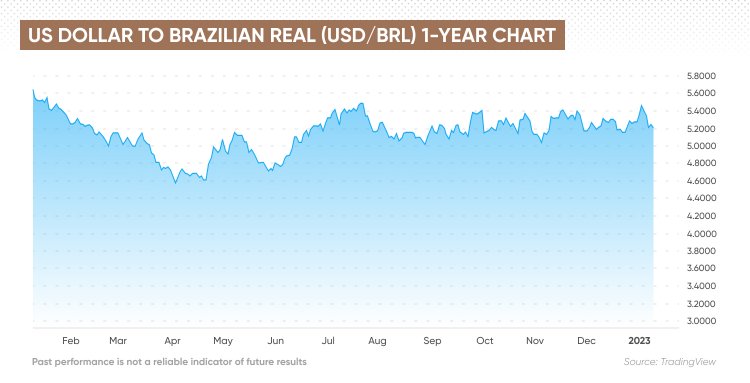 The Brazilian real (BRL) has appreciated recently as the US dollar has softened and BCB has kept its policy rate above the inflation rate. However, President Lula’s fiscal policy, which will focus on expanding budget-draining social welfare programs such as cash handouts and fuel tax cuts, has raised concerns.

At its inauguration ceremony on 1 January, President Lula announced the government decided to extend tax exemption on fuel prices by another 60 days.

“Here the incoming Lula administration is looking to break its fiscal ceiling by some BRL145/176bn to deliver on its manifesto of targeted support to the poor. Concerns over a leftward lurch in policy do seem more confined to FX than debt markets so far. We think 2023 will be a tough year for emerging markets and any policy missteps will be punished.”

“Should the fiscal rules be scrapped or re-designed to accommodate these policy proposals, the reality is likely to continue underperforming EM and LatAm peers as investors remain cautious around the nation’s economic outlook,” Monex wrote in the report.

Fitch Ratings on 31 October 2022 projected the country’s budget surplus to flip to a 1% of gross domestic product (GDP) deficit in 2023 on a cyclical ebb in revenues, tax cuts and spending measures, including the possible extension of increased Auxilio Brasil social benefits.

Brazil inflation rate forecasts: 2023 and beyond

The Brazilian financial market raised Brazil’s inflation forecast for 2023 to 5.36% in the weekly Focus Survey on 6 January, from 5.31% in the previous week and 5.08% four weeks ago. The Focus Survey, held by BCB, polls expectations from 140 institutions.

Economic data provider Trading Economics forecast inflation in Brazil at 4.45% by the end of the first quarter of 2023, dropping to 3.5% in 2024.

Analysts mentioned in this article expected the current inflation rate in Brazil to continue its downward trajectory to as low as 3.30% in 2025, according to a survey conducted by Brazil's central bank BCB.

Keep in mind that analysts' opinions can be wrong. Brazil inflation forecasts from analysts should not be used in place of your research. Before trading or investing, always conduct your due diligence. And never trade money that you cannot afford to lose.

USD/BRL forecast: How will Brazil’s real perform amid political headwinds?