News and Analysis News Forex AUD to CAD forecast: are you up to invest in AUD/CAD currency pair?

AUD to CAD forecast: are you up to invest in AUD/CAD currency pair?

The AUD/CAD pair is also highly sensitive to broader commodity price trends. Regarded as commodity currencies, both the Australian dollar and the Canadian dollar are strongly tied to natural resource exports.

As markets digest the latest trade war headlines, the AUD/CAD pair allows traders to benefit from macroeconomic events in specific international markets of Australia and Canada without being directly exposed to the Forex majors.

The Australian dollar price rate is significantly affected by its alignment with emerging Asian markets. By virtue of the close relations and historical ties to China and its hard commodities, Australia has developed a long-term relationship between precious metals and the AUD currency.

Today, the AUD rate is greatly affected by the US-China trade talks, climbing higher on the wave of potential improvement in Washington and Beijing relations and “phase 1 trade agreement”. Still, as many issues like intellectual property theft and Huawei licensing remain unresolved, the tariffs’ hike is scheduled for December and the trade talks may turn for worse like many times before, Australian dollar is still at risk of reversing and heading south.

The Canadian dollar strongly depends on the price of crude oil, as the country is one of the principal commodity exporters. CAD rates are deeply connected with the United States – Canadian closest and largest trading partner. The US accounts for 80% of all Canadian exports.

A major exporter of natural resources, including crude oil, natural gas and lumber, Canada takes a leading place in the global supply chain. In practice, it means the CAD echoes swings in the world's most popular benchmark stock indices, such the S&P 500.

The Bank of Canada (BoC) still expects a slowdown of the Canadian economy in the end of 2019, as the US-China trade war rumbles on. Although Canada’s economic growth for the 2nd quarter was 3,7% – its fastest in years  which allowed the BoC to keep the interest rate of 1.75 unchanged, the bank says the quarter strength was temporary and the global slowdown may eventually hit Canada.

However, the mere prospect of putting the tariff fight on hold and recent signs of progress in Brexit saga, can help Loonie to strengthen its positions.

According to Walletinvestor, Australian dollar vs. Canadian dollar, traded at 0.898 at the moment of writing, is a bad long-term investment, as their AUD/CAD prediction for the upcoming years is bearish.

Another analytical resourse TradingEconomics gives a contradictory view. Their short-term AUD to CAD prediction looks positive with AUD/CAD trend going up to 0.9 by the end of this quarter. Looking forward, they expect the Australian dollar to trade against the Canadian dollar around 0.9 in 1-year period.

Providing a detailed monthly AUD/CAD analysis, audtoday.com also expresses a bearish view on the Australian dollar vs. Canadian dollar price rate. According to their forecast, AUD/CAD pair will gradually decline from 0.9 at the end of 2019 to 0.7 in 2021. The price is expected to rebound to 0.8 again by 2023. 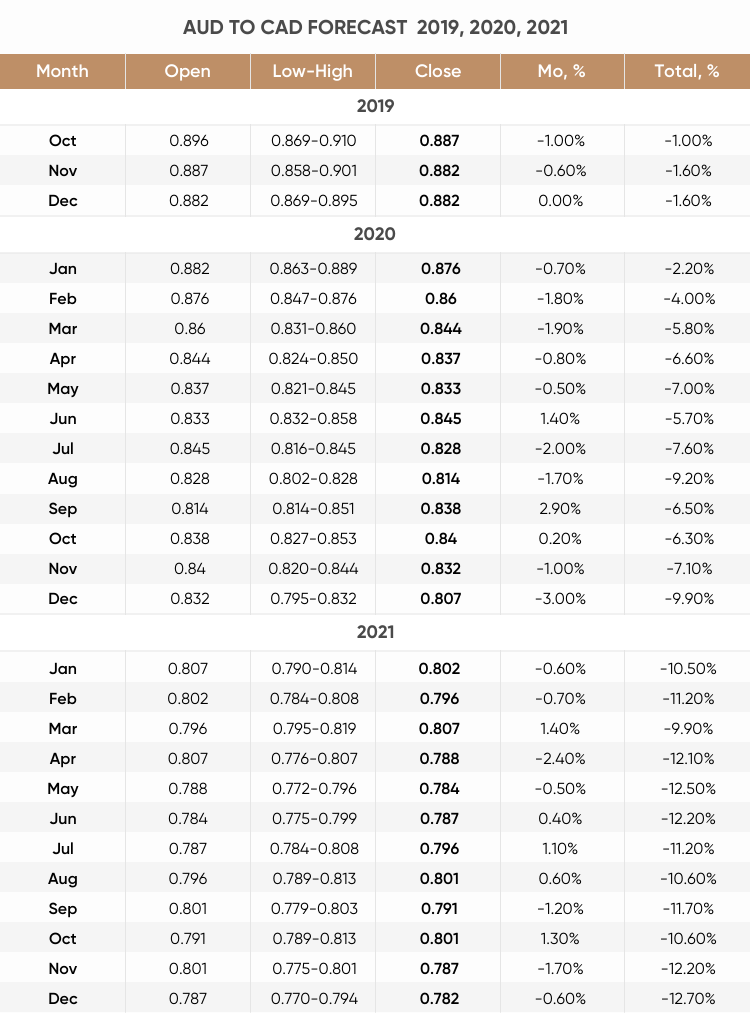 What you need to know about AUD/CAD investing

AUD/CAD may not be a major currency pair, the Australian dollar is the 5th and the Canadian dollar is the 7th most traded currency in the world. Widespread use makes this pairing highly liquid and popular among traders.

Australia is an go-to trading partner for China, which makes the Aussie an effective vehicle to gain exposure to the emerging Asian markets. Canada’s close economic relations with the US makes the Loonie an ideal tool to get indirect exposure to the major developments in the world’s leading economy.

To better understand what affects the AUD/CAD rate and make thorough trading decision, you should consider some key drivers that can boost extreme Australian dollar to Canadian dollar moves:

Capital.com AUD to CAD forecast: are you up to invest in AUD/CAD currency pair