Ariva price prediction: what is the long-term outlook for the crypto newcomer?

Ariva price prediction: can the token continue to soar?

Cryptocurrency newcomer ariva (ARV) saw a strong price spike last week and continues to trade above the levels seen at the start of September. As of 29 September, the coin has gained more than 600% since the start of the month.

What has driven it higher even as the larger cryptocurrencies have shed value?

In this article, we provide an overview of the ariva cryptocurrency and the long-term predictions for the price.

Ariva was created by anonymous developers. It launched in May 2021, with a pre-sale on the PancakeSwap decentralised exchange in June. The cryptocurrency is designed to be used in the global tourism industry as a blockchain-based payment gateway. It aims to facilitate payments for bookings on websites and mobile apps without the commission and fees that are common in the traditional cross-border payment system.

The ariva token runs on the Binance Smart Chain (BSC) network as a BEP-20 token. BEP-20 is a BSC token standard that was created to extend the functionality of the Ethereum token standard ERC-20.

The project’s development team – Ariva Digital – aims to launch its own coin and wallet by the first quarter of 2022. The software is intended to work in the same way as a credit card and point-of-service (POS) machine in the target destinations, reducing the need for cash and physical payment cards. Ariva will also launch its Ariva.World portal where travellers can pay for holiday bookings online by converting fiat currencies and other cryptos into the ARV token.

“Ariva has been produced to eliminate the expensive costs of international high-volume money transfers and the swift transaction complexity in the tourism and travel industry, which is one of the biggest industries in the world economy. One of its main aims is to eliminate the complexity and difficulty arising from the use of local currency in the destination country.”

Ariva plans to build a network “where members can meet with global and local tourism service providers in the light of previous travellers’ experiences and shares, make bookings with cryptocurrencies and earn crypto money from both their reservations and valuable content sharing”.

The development roadmap for the fourth quarter of this year expects to introduce token burning, listing the token on medium-sized cryptocurrency exchanges and the launch of the Ariva.World portal.

In the 4th quarter we're expecting:

There is a total supply of 100 billion ARV tokens, with 51.03 billion in circulation. With a market capitalisation of around $10.2m at the time of writing, ARV ranked 942nd by cryptocurrency market size. The main wallet holds 44.8 billion ARV. Circulating tokens will be transferred out of this wallet for new exchange listings. There is also a developer fund wallet that holds 2.5 billion ARV, which is reserved for project developments and integrations. A marketing wallet holds 1.67 billion ARV, while 1.25 billion ARV were transferred to the PancakeSwap Pool. 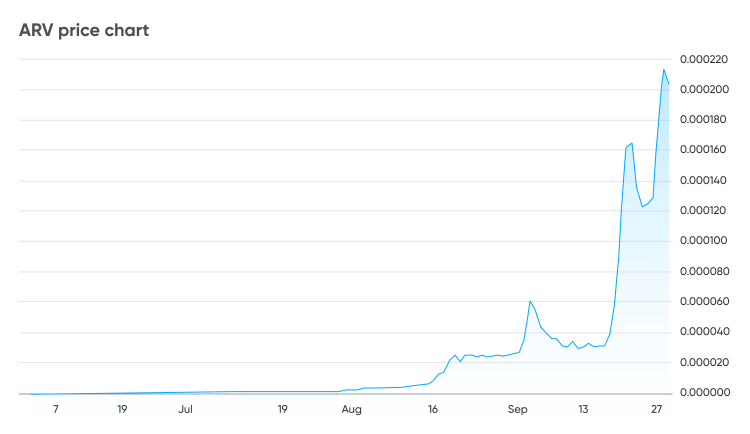 The price jumped to $0.00002172 on 19 August, after the exchange listings, and advanced again to $0.00006151 on 1 September, when it was listed on the popular CoinMarketCap and CoinGecko cryptocurrency data sites. ARV briefly touched $0.00014 on 5 September, before dropping back to $0.00002549 five days later. But it soon resumed its rally, returning to the $0.0001 level on 19 September and spiking to an intra-day high of $0.000377 on 21 September. On 22 September, the coin’s developers announced their plans for a blockchain-based ecosystem for the travel and tourism industry, with searches for the token increasing.

ARV is one of several small Binance Smart Chain tokens that have remained bullish despite a sell-off in the larger cryptocurrencies. According to Nomics, ARV is most actively traded against the Tether stablecoin, the Binance coin BNB and EVDC, which is another BEP-20 token.

Remember that past performance is no guarantee of future returns. Always do your own research to form a view on the market.

Ariva price prediction: what is the long-term outlook for the crypto newcomer? 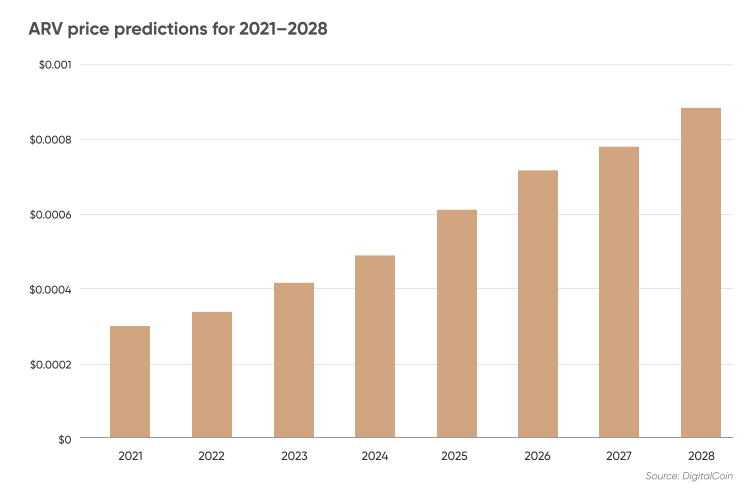 It’s important to keep in mind that cryptocurrency markets remain extremely volatile, making it hard to predict what the price of the coin will be in a few hours – and even harder to give longer-term estimates.

We recommend you always do your own research and consider the latest market trends and news, technical and fundamental analysis, and expert opinion before making any investment decisions.

Ariva is a relatively new coin. Cryptocurrency prices are highly volatile, making them riskier investments than other types of assets. Whether ARV is a good investment for your portfolio depends on your personal circumstances and risk tolerance. As always, you should do your own research and evaluate the level of risk you are prepared to take on before you invest your money.

Forecasting sites differ on whether they expect the ARV price to go up in the future. WalletInvestor predicts the price will fall as low as $0.000001 in 2026, whereas PricePrediction expects it to rise to $0.005 by the end of the decade. In the meantime, it’s important to keep in mind that forecasters can get their estimates wrong. Make sure to always do your own research.

Currently, you can buy ARV coins on a number of cryptocurrency exchanges, including XT, PancakeSwap, ProBit, Lbank, Hotbit and SushiSwap. When you buy coins on an exchange, you can transfer them to a software or hardware wallet to keep them secure from hackers.

Read more: The Graph (GRT) price prediction: Can the token rebound by the end of the year?

Capital.com Ariva price prediction: can the token continue to soar?