News and Analysis News Cryptocurrencies “95% of NFTs will be gone in year or two,” founder of Europe’s biggest PFP says

“95% of NFTs will be gone in year or two,” founder of Europe’s biggest PFP says

Non-fungible tokens (NFTs) boomed in 2021, but in 2022 their popularity suddenly fell.

“I would say there was too much hype and many projects were launching – and I believe some 95% of them will be gone in one or two years,” says Bartek Sibiga, founder and CEO of Europe’s biggest NTF profile picture (PFP) project, Fancy Bears Metaverse.

“Only those projects with true utility and big value will survive,” he adds.“The future of the PFP project will be about utility, about perks you get from holding.”

PFP project is a collection of unique digital collectibles that are used as avatars. The world’s biggest PFP project, the Bored Ape Yacht Club, has seen some of its NFTs sell for a mind-blowing $2.8m.

The Fancy Bears Metaverse is a community of 8,888 Fancy Bears holders of NFTs – bear animations with unique accessories, which can be used as avatars. The project has its own ‘honey ecosystem’ with a native HONEY token.

In the upcoming phase, users will be able to modify their avatars and buy new NFTs to add on their bear. “Everything is on the blockchain, so everything is fully transparent,” Sibiga says.

As its full name would suggest, the project has metaverse ambitions – and Fancy Bears have been very active in this space. “We have [a] 3D scanner, which allows you to scan yourself – you can create your digital avatar for the metaverse,” Sibiga says.

According to Sibiga, holders will be able to scan themselves during Fancy Bears upcoming parties, with one big gathering planned in Europe and one in the US.

The project is on a mission to popularise NFTs on the Old Continent, says Sibiga: “We wanted to be the biggest PFP project in Europe, because in the US, you have hundreds of projects.

“In Europe, NFT adoption is just starting, people are just learning so we thought that here we can be the top one. And we are in Poland, in Germany and in other countries.

“In the US, there is a big competition. In Europe, when we want to get new holders, we have to educate them – what is an NFT, what it is all about – and step by step, we onboard them to NFTs. We’re spreading adoption in Europe.

“Compared to other projects, I think we get a lot of people who bought Fancy Bears as their first NFT,” Sibiga says, explaining the motivation behind the project’s focus on Europe. “Whereas in the US, there is more people buying other projects.”

But some quarter of the Fancy Bears are coming from the US. Sibiga says that community members are “super engaged” as the smaller European market and lesser competition means they are “100% dedicated to Fancy Bears”. 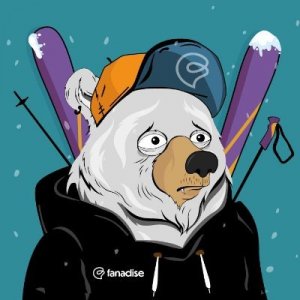 “We spend a lot of time with the community. All holders can give their ideas, and we are discussing all ideas from the holders and picking the best ones,” he says.

Fancy Bears also have a DAO (decentralised anonymous organisation) where the members vote on projects’ steps – what technology to use, which innovations it should invest in.

Here, the Fancy Bears team would also seek the community’s permission for partnership with another Metaverse or PFP project etc.

From NFT scams, where influencers hyped projects to their often young and gullible audiences, or cashed in and disappeared, to hackers’ attacks where holders lost their NFTs, the NFT space is no stranger to negative press.

Sibiga acknowledges these problems in the NFTverse: “People are losing their NFTs because of the scammers. There’s a lot of scammers – hundreds of them, a lot of hackers – and this is a big problem right now in the NFT space.

“So yes, this is a big problem right now, but this is also because we are so early. I always say we have two big problems in the NFT space: the scammers and hackers are one, but an even bigger one is the environment, the carbon footprint.

“But that is also something that is not going to happen in the future. Once we get Ethereum 2.0, once we get the Proof-of-Stake on Ethereum, there will be no problem like this. And NFTs and crypto will also use more clean and renewable energy.

“These problems are because all the technologies are not fully efficient at the beginning. And it needs time. So, things like OpenSea will happen again, but in the future, it won't be a problem,” Sibiga believes.

Will non-fungible tokens be taxed from now on?

Capital.com “95% of NFTs will be gone in year or two,” founder of Europe’s biggest PFP says