As we knock on the door of 2023, infinite possibilities await the global economy and financial markets. Until recently, the bearish consensus was dominating the narrative: war, imminent recession, profits will fall, the stock market will plummet.

Then US inflation slowed by 1.1% in just two months. The imminent recession chatter is being challenged by persistently resilient economic data and a few contrarians who still think a soft landing is possible. The only certainty is uncertainty.

As the story unfolds, perhaps the path will become clearer. This three-part series is an attempt at mapping that path, or better said, possible paths. The optimal route is unlikely to be known until the ever-reliable 20/20 hindsight kicks in (around this time next year).

Quickly recapping, in part one, we covered, Forecasts, Wages & The Worlds Biggest Consumer, followed by a summary of the rising rates environment and the effect on the economic cycle and potential for a company earnings recession to drag stock valuations lower. Onto central banks…

Central banks are telling us what they’ll do, and we should listen

“I’m leaning short on the equity markets right now because I think the upside/downside just doesn’t make sense to me when I have so many…central banks telling me what they’re going to do.”

The words of David Tepper, one of the top-performing hedge fund managers in the world. See the full interview here:

Can the Fed stay higher for longer?

There’s clearly disagreement between the markets and the Fed now. Inflation is coming off the peak, and the traders are betting that the Fed will be cutting rates in 2023.

This slightly complicated looking chart tells the story. The green line is where the ‘median’ Fed member sees rates at the end of 2023 (and beyond). The purple line is what overnight index (interest rate) swaps are pricing, and the white line is where Fed funds futures see rates ending up. 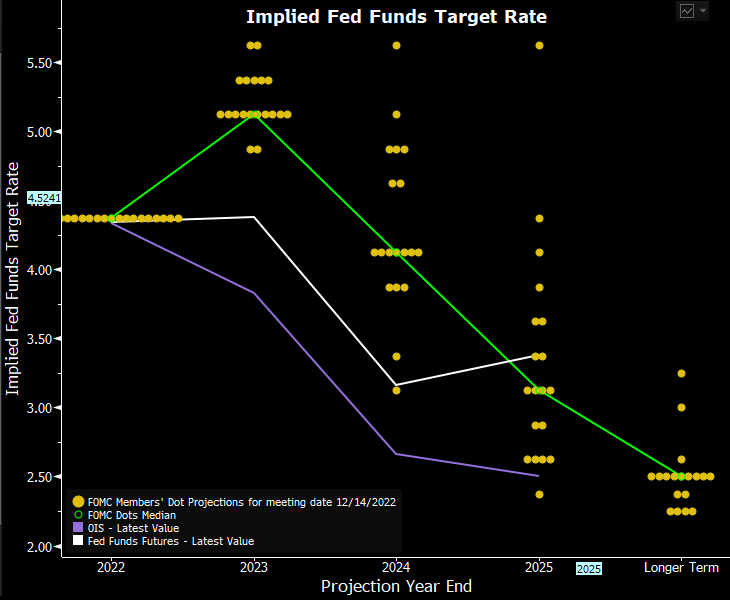 Markets can be wrong, as can the Fed. As recently as August, markets were convinced that the Fed would peak out at around 4%. We’re already above that after the latest hike.

And it’s not just the Fed to watch. The Bank of England has no idea what to do next. At the last meeting, the majority voted for a 0.5% hike, two members voted for no hike, while one voted for an even more aggressive 0.75% rise.

The ECB has finally found its hawkish playbook, with President Lagarde stating that “the ECB needs to do more on rates than markets have priced”, later adding “we have longer to go, and we are in for a long game”.

Then there’s the lesser-spotted Bank of Japan. It says the same thing at every meeting: easy policy, no rate rises. It was long assumed that it would never be able to exit the negative interest rate policy regime. Then, out of the blue, it made a ‘technical adjustment’ to its yield curve control band, allowing the 10-year bond to trade 0.5% either side of 0% instead of the previous 0.25%.

Seems like nothing, but in the context of rising inflation and a change of central bank governor in April, the decision has fuelled speculation that change is afoot, and the current governor is clearing the decks for his successor.

That December move finally called time on the yen weakness that had prevailed through much of 2022. Japanese inflation hit 3.8% in November, above the BoJ’s 2% target, but nowhere near the same problem as for the BoE, ECB & Fed.

If Japan were to embark on a rate hike cycle, that pushes the global interest rate floor higher, and perhaps convinces markets that a return to global ZIRP (Zero Interest Rate Policy) is truly off the table. A new regime is in effect?

The China reopening trade started back in November, when stock indices such as the Hang Seng HK50 rallied by almost 40% from the lows. The reopening itself isn’t progressing smoothly though. The FT reported that in the first 20 days of December, an estimated 250 million people had Covid-19, according to a Wednesday health briefing by Sun Yang, a deputy director of the Chinese Center for Disease Control and Prevention.

Hospitals are struggling to cope, as are morgues and the associated services. Illness and fear of illness will hold everything back: travel, spending, production. But that won’t last forever. Just as we’ve seen elsewhere, China is likely to learn to live with the virus and over time, normal life will increasingly resume.

Which could be bullish for commodity prices. Especially as the CCP has already outlined plans to increase spending and target new infrastructure to get the economy humming again. In theory, this will increase demand for commodities, including copper which is already in short supply, and energy sources such as oil and gas.

Global input costs could rise due to increasing demand. Inflationary.

Another Chinese wildcard is the possibility that wages will rise. It’s important not to extrapolate from just one instance, but Foxconn had to increase pay to bring in workers for its iPhone assembly hub after repeated disruption due to strict Covid measures. The CCP is also talking up the importance of improving domestic consumption.

They’ve said this for years, but the motivation to see this through has perhaps risen as trade tensions with the US remain high. People often criticise the US’ (over)reliance on China for production, but there’s two sides to every trade relationship: China relies on the US for consumption.

Incentives to increase Chinese wages and that domestic purchasing power could prove inflationary for the costs of producing in China.

After spiking higher earlier in 2022, oil prices are set to close the year almost flat. A sentence which would have seemed unthinkable six months ago. Like it or not, Russia is one of the largest energy-producing nations. Whether as a result of the West’s price caps and sanctions or as a retaliation to them, there’s a very real risk of lower supplies from Russia in the future.

Russia’s Deputy Prime Minister Alexander Novak told state television that the country may cut production by 5%-7% in early 2023, and stop sales to any country supporting or imposing the price cap. Those cuts could amount to 500,000-700,000 barrels per day.

Goldman Sachs forecast a sequential growth in oil demand, but not supply:

“…next year will see strong sequential demand growth from China’s reopening and recovering international travel. Alongside this, is the manifestation of a decade of underinvestment, with global ex US/OPEC+ production declining through 2026.

“This will occur with stocks and spare capacity still near record lows. Meanwhile, US shale faces bottlenecks, but more broadly, the industry has matured, with a focus on shareholder returns, returning market power to OPEC (the Old Oil Order). We therefore forecast Brent prices rising to $105/bbl in 2024.”

Even the most bearish analysts look at $70 oil as a likely price floor, so perhaps long oil could be an asymmetric trade for 2023, especially if the global economy performs better than expected.

Which brings us nicely back to the uncertainty facing us in the year ahead. Let’s take a look at the anti-consensus trades. An outright crash or a (brief) return to Goldilocks…

The TS Lombard team noted how most year ahead outlooks are variations on the same theme. This one:

“The major economies are likely to stagnate or experience mild recessions (the difference is mainly in the marketing), progress on inflation will be incomplete (staying above central banks ’targets) and monetary policy will remain tighter for longer, with a pause but no “pivot” – despite the deep inversion in bond markets.”

Which makes sense. But those economists got it massively wrong last year, so perhaps we should actively explore alternative scenarios too…

How about ‘all of the above’?

Mild recessions, followed by a Goldilocks swansong, before the proper recession hits as those long and variable lags kick in. Or maybe none of these scenarios will fully play out. It seems likely markets could trade loosely between themes throughout the year.

Recession fears fail to result in an actual recession. Earnings drop, but not meaningfully. Slowdown fears are then superseded by hopes of a return to Goldilocks conditions as inflation falls and real wages rise.

The increased demand from a revived US consumer and China returning to normal is a boost for energy prices. Then inflation picks up again which spurs fears of even more rate hikes. Credit markets seize up anticipating a wave of defaults. Confidence evaporates, the economy slows, inflation drops, rate cuts are priced in again… and we’ve done an entire round trip.

It’s easy to imagine that the overriding theme of 2023 could be one of Jekyll & Hyde on steroids, as markets clumsily lurch from one theme to another, never fully transitioning before moving on to the next.

A year of infinite possibilities awaits. The only certainty is uncertainty.

2023 – A year of infinite possibilities: Part 1 – The world’s biggest consumer

2023 – A year of infinite possibilities: Part 2 – Late cycles and recessions