The Swiss franc (CHF) has been the best-performing major currency so far in November, with most of the gains occurring in the past week due to a confluence of factors including weaker-than-expected US inflation numbers and hawkish comments from Swiss National Bank (SNB).

The US inflation rate fell from 8.2% in September to 7.7% in October, which was less than what the market expected (8%). This has prompted market players to cut their Fed hike forecasts to 50 basis points in December, and to price in a lower terminal rate of 4.85% in May 2023, weighing on the dollar broadly.

But on Friday, November 11, a favourable franc-specific catalyst materialised. SNB Governor Thomas Jordan stated that the Bank is ready to take “all measures necessary” to bring inflation back to the 0-2% target. Additionally, he suggested his readiness to sell foreign exchange reserves, arguing that the policy stance should become more restrictive than it is today. The CHF rallied against all major peers, gaining 2.3% on the day vis-à-vis the greenback and snapping a six-day winning streak. 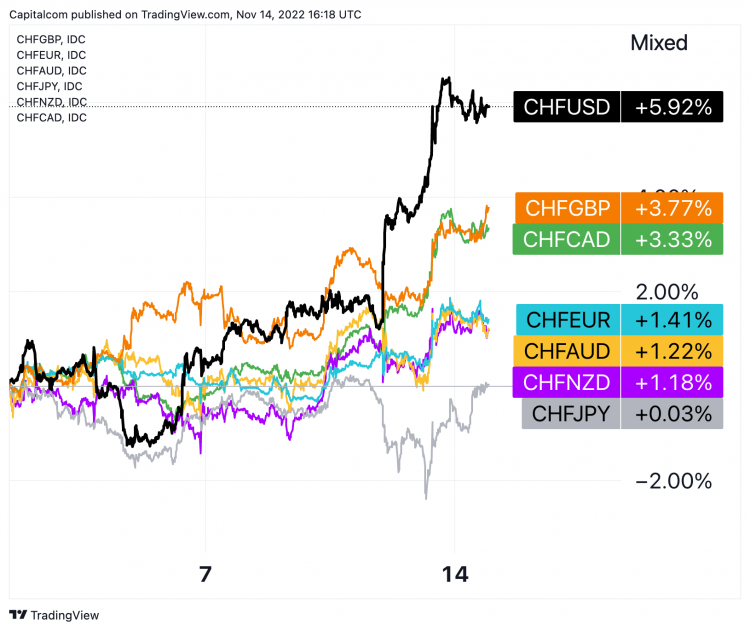 At its meeting in September, the SNB increased its policy rate by 75 basis points to 0.5%, marking the first time since 2011 that interest rates were not in the negative region.

The latest statistics showed an annual inflation rate of 3% in October, significantly below central bank predictions of 3.4% and market forecasts of 3.2%. This was also the second straight dip in inflation from the three-decade peak of 3.5% hit in August.

Though it was the lowest inflation figure since May, this was still above the Swiss National Bank's 0-2 percent goal range. Meanwhile, October's jobless rate of 1.9% was also better than expected, and it continued to hover near a 21-year low.

Above-target inflation and a tight labour market should keep the SNB on a restrictive stance for the foreseeable future. Recent comments by SNB Governor Thomas Jordan also indicate that the market may underestimate the impact of impending rate hikes in Switzerland.

The next meeting of the SNB is set for December 21, and the market is currently pricing in a 46-basis-point increase. If the SNB steers the market toward a greater 75 basis point shift in December, this hawkish repricing could cause the Swiss franc to strengthen further.

What is your sentiment on USD/CHF?

Give USD/CHF a try 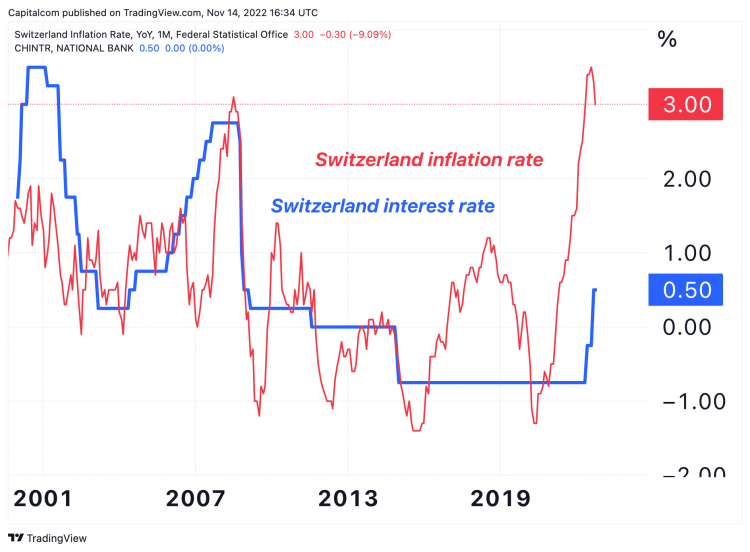 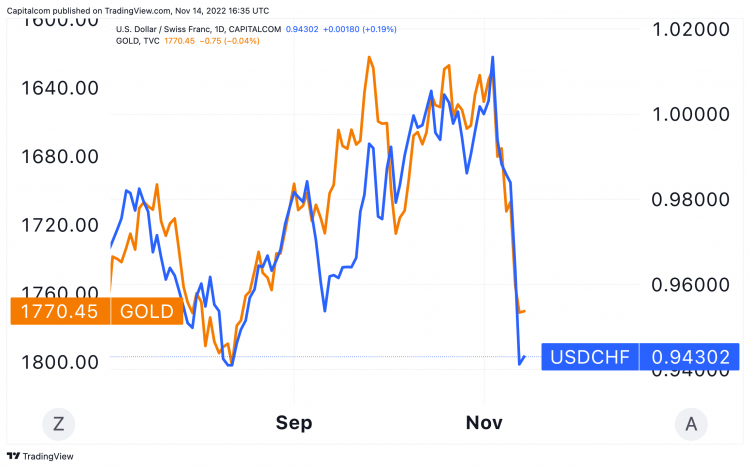 The longstanding positive correlation between the Swiss franc (CHF) and the price of gold has strengthened again over the past three months.

The chart above shows the USD/CHF pair on the right-hand side and the inverted price of gold on the left. Recently, the two variables have been highly and positively connected, implying that a strengthening (weakening) in the USD/CHF pair corresponded to stronger (weaker) gold prices.

So far, this movement has likely been mainly triggered by a hit in the dollar sentiment, but signs of growth/inflation slowdown and a Fed hawkishness peak could perhaps fuel the bullish momentum on gold and the franc. 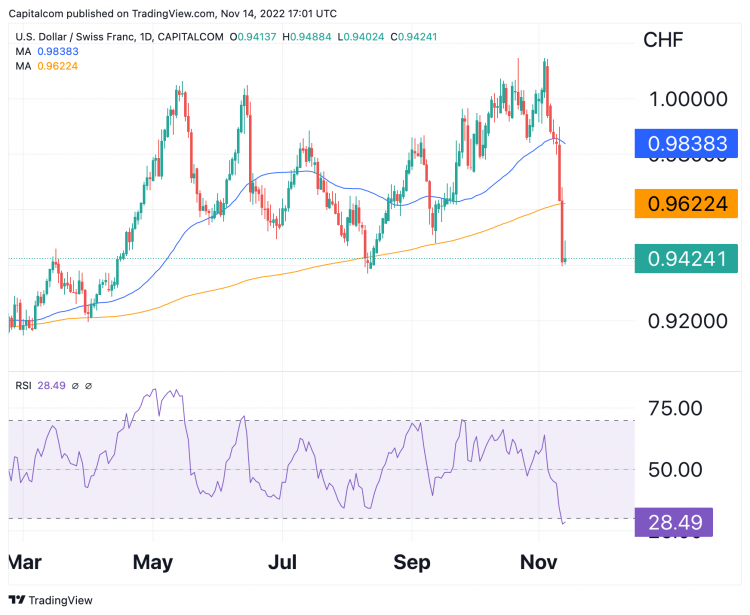 The USD/CHF pair experienced a very violent shift over the past week, falling 5.5% from 0.997 to 0.941 as of the close of trading on Friday.

The price action destroyed both the 50-day and 200-day moving averages, and the 14-day RSI oscillator reached oversold conditions for the first time since May 2021.

Oversold RSI conditions are causing some bottom picking in USD/CHF, although the bullish trend appears to have been decisively broken over the past week.

A bullish effort to break through 0.95 was already thwarted by bearish momentum at 0.9485. (September lows).

Euro outlook: Is the US Dollar Oversold Amid EUR/USD Correction?

Gold technical analysis: Breakouts of 50-dma and 2022 trendline; Where to next?