Over the past year, South Africa has seen its interest rates double from a record low of 3.5% to 7%, as of the end of November 2022. Will this unprecedented pace of tightening quell inflationary pressures in South Africa? Let’s find out below.

Inflation is defined as the rate of increase in the prices of goods and services in a given region over a period of time.

The changes in consumer cost are measured by government agencies via household surveys that track the cost of purchasing a basket of common goods such as food and beverages, clothing, health, education, transport and housing, depending on population preferences.

Typically, housing expenses which include rent and mortgages make up the largest component of the consumer basket.

CPI is also known as headline inflation and it measures the rate of change of prices of goods and services used by households. A measure that excludes volatile items of food and energy prices is known as core inflation, or core CPI.

PPI measures the rate of change over time in the selling prices received by domestic producers for their output. PPI includes prices from the first commercial transaction for many products and services.

What is your sentiment on USD/ZAR?

Give USD/ZAR a try

South Africa inflation rate data compiled by Trading Economics showed that the price of consumer goods and services in the nation has been on a consistent uptrend since 2020.

Before the Covid-19 pandemic, the South African inflation theme was different from the decade-high inflation prevalent in 2022. 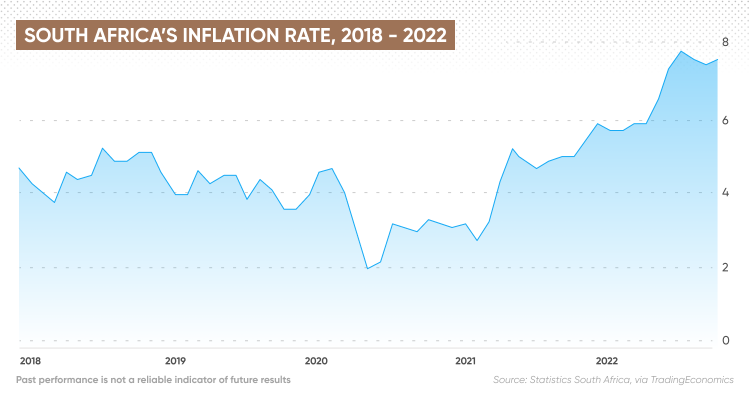 In late 2019, South Africa was beginning to see signs of disinflation amid poor economic growth and rising unemployment in the nation. CPI readings had fallen to its lowest in nearly nine years in November 2019.

The start of the Covid-19 pandemic and subsequent lockdowns further slowed the South Africa inflation rate to a near 16-year low of 2.1% in May 2020.

From November 2021 onwards, the SARB hiked rates at an unprecedented pace as inflation rate in South Africa mirrored global trends to surge to multi-year highs. By July 2022, annual inflation in South Africa accelerated at its fastest pace, hitting an over 13-year high at 7.8%.

The latest inflation data from October 2022 indicated that price pressures in South Africa may have peaked, as annual inflation came in below its July peak for the third month in a row.

However, October 2022 inflation numbers underscored the size of the task at hand for policymakers, as annual CPI inflation remained well above the central bank’s target range of 3% to 6%.

Statistics South Africa reported a higher-than-expected inflation pace in October 2022 at 7.6%, up from the 7.5% rate reported in September 2022.

Data revealed food items and household goods were the biggest contributors to price increases in October 2022. Prices for milk, eggs and cheese rose at their fastest pace since 2017. Household items like detergents, soaps and toothpaste posted an annual inflation rate of between 20% to 30% in October 2022.

According to South Africa’s central bank, the depreciation of the South African rand (ZAR) was one of the contributors to accelerated food inflation in the nation.

On a positive note, the decrease in petrol prices for the third consecutive month helped trim the pace of inflation in October 2022.

Meanwhile, South Africa’s PPI inflation rate eased to 16% in October 2022, from 16.3% in September 2022, as industry incurred lower electricity and water expenses during the month.

The higher food inflation from the CPI report was reflected in October's PPI report. Agriculture, forestry and fishing items were the biggest contributors to expenses incurred by industry and business.

The persistently high inflation prompted the South Africa Reserve Bank to hike interest rates for the sixth time this year at its November monetary policy meeting.

“Risks to the inflation outlook are assessed to the upside. Despite easing of global producer price and food inflation, Russia’s war in the Ukraine continues, with adverse effects on global prices generally…The oil market is expected to remain tight, with upside risk to prices. Electricity and other administered prices continue to present clear medium-term risks.”

South Africa inflation rate forecast for 2023 and beyond

The SARB said in November 2022 that price pressures have continued to spread from goods to services and wages as it raised its 2022 South Africa inflation rate forecast to 7.3%, from 7%.

Finally, data firm Trading Economics saw consumer prices increasing by 5.4% in 2023 and 4.5% in 2024 in its South Africa inflation forecast.

“In this uncertain environment, monetary policy decisions will continue to be data dependent and sensitive to the balance of risks to the outlook. The MPC (monetary policy committee) will seek to look through temporary price shocks and focus on potential second round effects and the risks of de-anchoring inflation expectations.”

The next monetary policy meeting was scheduled for 26 January 2023.

Forecasting South Africa inflation rate in 2023 and beyond is a challenging task due to the uncertainties of the future. Therefore, it is important to note that analysts and algorithms can be wrong in their inflation predictions.

South Africa inflation forecasts mentioned in this article shouldn’t be used as a substitute for your own research. Always conduct your own due diligence. Remember that your decision to trade or invest should depend on your risk tolerance, expertise in the market, portfolio size, and goals. Keep in mind that past performance is no guarantee of future results. And never trade money that you cannot afford to lose.

Housing market recession: Everything you need to know