Banks on the brink?

Russia’s invasion of Ukraine has been met with the imposition of severe and wide-ranging economic sanctions. These have hit high-profile individuals, industry giants and even the Russian Central Bank (CBR). In the latest news, Russia was hit by the toughest economic sanctions yet – the US ban on Russian energy imports makes Russia the most sanctioned country in the world.

In an attempt to stabilise the economy, Russia has responded by imposing capital controls, increasing interest rates to 20% and freezing the stock market. The result? Economic turmoil.

“Russia is now facing a recession, as the effects of sanctions will hit economic activity hard, and the devaluation of the ruble will also push up inflation for ordinary Russians,” said Laith Khalaf, head of investment research at AJ Bell, in an exclusive statement to Capital.com.

We explain the factors driving this economic collapse, and take a look at analysts’ latest predictions for the Russian economy in 2022.

Countries have also imposed sanctions on individual Russian companies, with the UK banning Russian airline Aeroflot from UK airspace and the US restricting Gazprom’s ability to raise money through the US markets.

Significantly, several Russian banks have been removed from the Swift international payments system, effectively disconnecting them from the international financial system. The US, UK, Canada and the EU have also imposed measures to prevent Russia’s central bank from deploying its international reserves, effectively freezing almost half of its $630bn foreign exchange reserves.

This is described as “a move almost without precedent” by Neil Shearing, chief economist at Capital Economics. The only other central banks subject to US sanctions have been Iran, North Korea, Syria and Venezuela.

On 8 March, Russia looked set to face even stronger economic pressure as the US banned Russian energy imports, and the UK announced its intention to phase out imports of Russian oil by the end of the year.

In an 8 March research note shared with Capital.com, Susannah Streeter, senior investment and markets analyst at Hargreaves Lansdown, described the sanctions as “the biggest domino” to fall in the “strategy aimed at isolating Russia and weakening its economy”.

In response, the CBR has moved to impose capital controls and hike interest rates, despite significant risks to the domestic economy.

The Russian Central Bank increased interest rates from 9.5% to 20% on February 28th, in an attempt to bolster the value of the ruble, which plummeted over 20% against the dollar on 27 February alone. 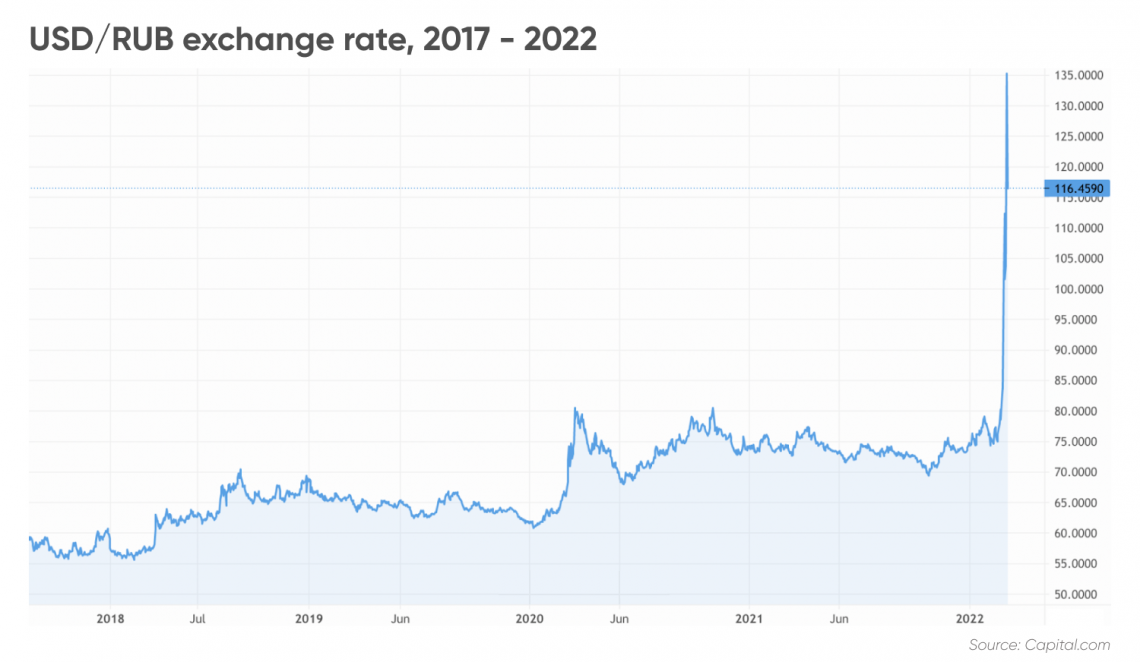 The CBR also ordered all exporters to sell 80% of their foreign currency gains from exports and has banned local brokers from selling securities held by non-residents.

At the time of writing (9 March), Russia’s stock market has also closed, in a move designed to shield investors from what look likely to be sharp losses.

The querstion on investors' lips right now is what will happen to Russian economy after sanctions. The combination of sharp sanctions and a tight economic policy response look set to cause significant damage to the future of Russian economy.

In his Russian economic outlook, Shearing argues that the Russia's economy will first undergo a period of “acute pain as the economy adjusts to the effects of sanctions''. The economics research consultancy projects a peak-to-trough fall of 8% over the short term – about the same magnitude as the recession triggered by the 2008 global financial crisis.

Soaring prices look set to contribute to the turmoil. In a 2 March briefing note, analysts at Oxford Economics forecast Russian inflation to reach 20% by 2023, which combined with slow growth could place a stagflationary squeeze on Russia’s economy.

The Russian stock market initially came under intense pressure with the RTS dropping almost 40% on 24 February 2022 as news of the invasion broke.

Russian authorities responded by closing the Moscow Exchange (MOEX), hiking rates and imposing capital controls – but few analysts believe that they can put off long-term pain.

“It is unlikely that rate hikes can offset the risks of holding RUB assets even for Russian citizens,” said Tatiana Orlova, an Economist at Oxford Economics, in a 28 February briefing.

At the time of writing (9 March), the MOEX remained closed,pending further updates from the CBR’s Press Service .

What is your sentiment on USD/RUB?

Give USD/RUB a try

Banks on the brink?

Sanctions are putting the Russian financial system under increasing strain. On 6 March, ratings agency Moody’s downgraded Russia’s ratings from B3 to Ca - the second lowest long-term rating, reserved for obligations that are “highly speculative and are likely in, or very near’ default with some prospect of recovery in principal or interest.

“The risk of macro-economic instability is further elevated by the effect of new sanctions making a very significant portion of Russia’s accumulated financial buffers inaccessible,” explained the rationale of the ratings report.

“Significant deposit withdrawals that reduce liquidity in the banking system would add to the risks to financial stability and could require the government to step in to support the banking sector,” the report said.

Historical analysis of the economic impact of conflicts and sanctions also suggests that the consequences for the Russian economy could be profound over the longer term.

In a 4 March briefing shared with Capital.com, research from Oxford Economics found that the impact of international sanctions tends to intensify over time. An analysis of past conflicts found that GDP fell by over 2% during the first year of sanctions and by 4% during the second year.

The same research briefing also found that GDP struggled to recover during the first three years after sanctions were lifted, meaning Russia stands to face an extended period of depressed economic growth.

Oxford Economics’s historical analysis also suggested that the longer term impact on Russia’s GDP could hinge on the duration of the conflict. 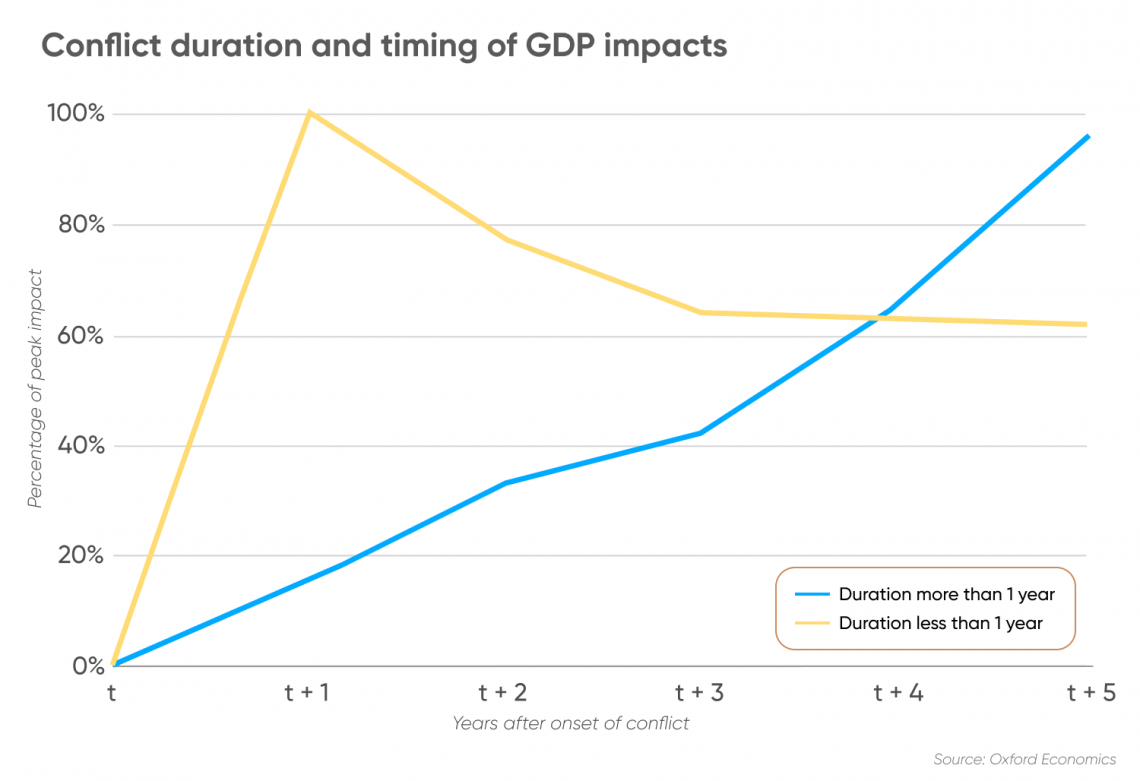 For short-lived conflicts, Oxford Economics found that peak economic impacts were felt after about a year and then started to subside. But where these conflicts lasted more than a year, the effects built up over time, with the peak impact being felt up to five years after the onset of conflict.

This means that the horrors of a longer conflict could also see the Russian economy forecast to slide deeper and deeper into recession.

Sanctions on Russian energy imports look set to significantly worsen the hit to GDP. The Russian economy is heavily reliant on oil and gas revenues. According to data from Statista, Russia is the world’s top exporter of natural gas by a significant margin and the third-biggest crude oil producer.

Hargreaves Lansdown’s Streeter described moves to ban Russian energy imports as “the toughest economic sanction yet on Moscow given how reliant the country is on oil and gas revenues”.

Analysis from Statista produced on 25 February highlighted just how significant oil and energy sanctions could be. It suggested that while a Western ban on Russian computer technology could be expected to reduce Russia’s GDP by 0.1%, a crude oil embargo could see it take a 1.2% hit. According to the research, a ban on gas imports alone could cause a huge 2.9% drop in GDP. 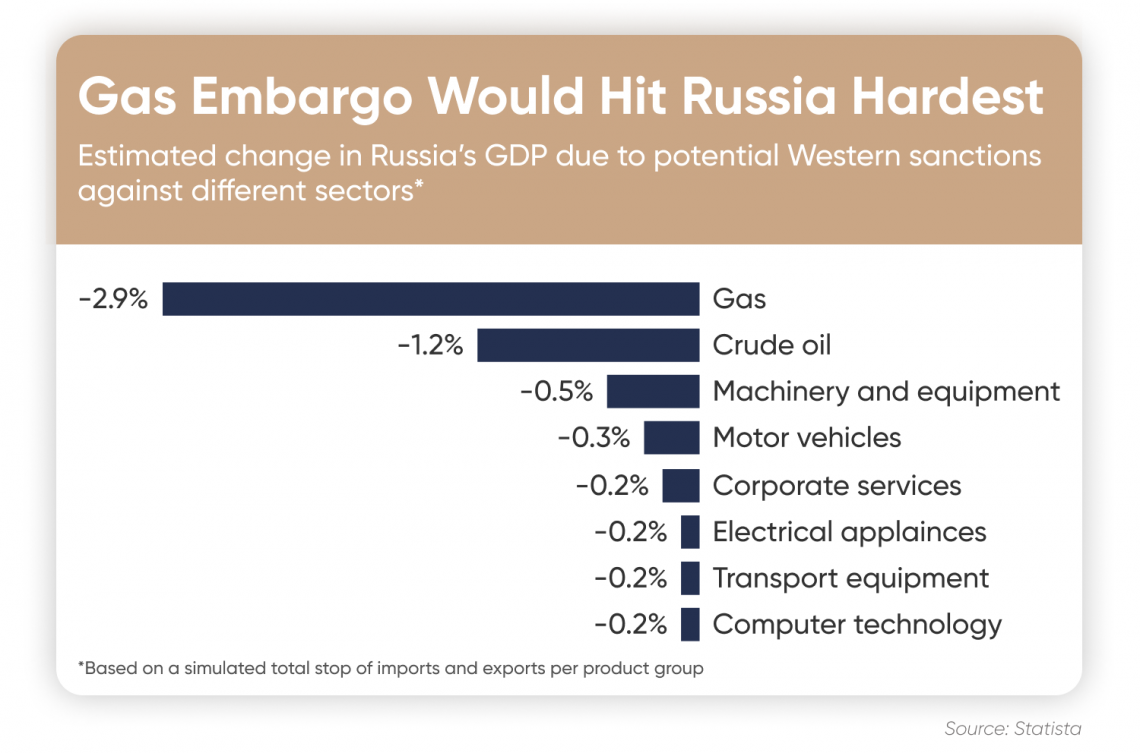 At the time of writing (9 March), only the US and the UK had moved to sanction energy imports, and considerable uncertainty remains over whether the rest of Europe will follow suit, given the difficulty and expense of transitioning away from Russian energy.

“Just how long countries like Germany will hold out from joining a ban is unclear, as falling into line with US policy has the potential to cause huge economic pain given its reliance on Russian energy supplies,” said Streeter.

Though the immediate future of the Russian economy looks bleak, long-term consequences are likely to depend on the duration of the conflict and the intensity of any further sanctions. The longer the disruption, the deeper Russia’s decoupling from the global economy is likely to be.

“Events are still developing rapidly, so it’s prudent not to draw too many conclusions about the long term effects of the crisis on the Russian economy, but it seems likely that there will be some long standing economic scarring, not least as European countries hasten to reduce their reliance on Russian energy imports,” said AJ Bell’s Khalaf.