After a bullish 2021, Japan consumer confidence is back to pandemic levels, and following a trajectory that looks closer to the Great Recession of 2008

With the economy contracting in the last quarter, and inflation in unfamiliar territory, confidence may become increasingly difficult to find among the Japanese public.

What is consumer confidence and how is it measured in Japan?

Consumer confidence is a barometer of confidence in an economy among its citizens. It’s a vital indicator of the health of an economy. Confidence among consumers is a forward guide to their spending and saving intentions, which can influence Gross Domestic Product (GDP).

On the flip side, rising wages and incomes, falling inflation and interest rate cuts would be expected to drive consumer confidence higher.

There are a couple of measures of consumer confidence in Japan, including a survey published by the country’s Cabinet Office, which occurs on a monthly basis with the last one surveying 8,400 households.

The measure, which is an index, has four sub-categories for assessing confidence: overall livelihood, income growth, employment, and willingness to buy durable goods.

Japan consumer confidence has experienced something of a rollercoaster over the last two years, instigated by the Covid-19 pandemic.

The government’s measure dipped to its lowest level since records began in 1982 at the onset of the pandemic, as mass lockdowns to contain the spread of the virus put consumers in a dark mood. The seasonally adjusted measure dipped to 22.1, having read 39 at the start of the year.

Heavy government stimulus to support households, workers and businesses brought much-needed balance sheet optimism back to consumers as the indicator recovered through 2020, but that was stunted by a slow rollout of the Covid-19 vaccine and fresh lockdowns to contain new spreads. 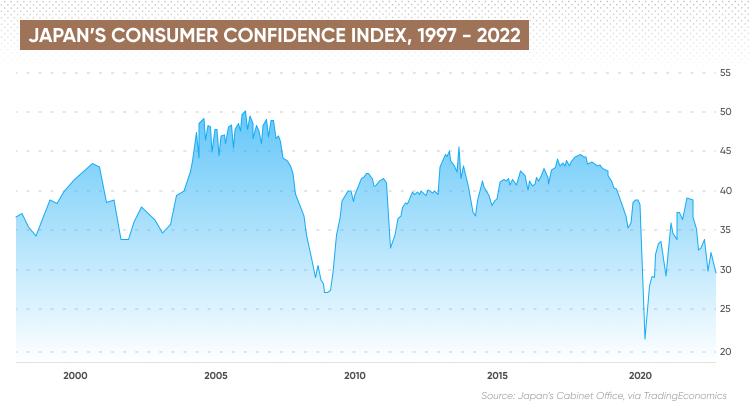 Confidence began to see a more consistent upward curve through 2021, as conditions began to normalise and consumers were buoyed by pent up savings and an easing of restrictions.

Challenging conditions though have seen the indicator start to decline again this year, with the Japan consumer confidence index down 18% this year, sitting at 29.9 in October 2022.

The latest reading showed all four measures of confidence were down on the previous month, with overall livelihood experiencing the biggest drop of 1.7 points.

What is driving consumer confidence in Japan?

Inflation, while relatively tame compared to double-digit figures experienced in other economies, is at its highest level in decades in Japan.

Economists polled by Reuters, as of 11 November, expected the measure to hit a four-decade high of 3.5% when October figures are released.

Meanwhile, McKinsey wrote in its update last month based on an analysis of consumer sentiment for August:

“Inflationary headwinds, as well as long-lasting impact of COVID-19 is prolonging Japanese consumers’ intent to stay conservative about spending, especially discretionary categories. While consumers are getting back to normal, digital activities are scaling and starting to penetrate in lives of consumers toward post COVID-19.”

Japan-based bank Mizuho wrote in September that it expected Japan’s consumption to “pick up from around the end of 2022, when the impact of the Covid-19 pandemic subsides, and demand for inbound tourism will also recover.” The bank added:

“On the other hand, the deterioration of Japan’s terms of trade and the slowdown of the overseas economy will serve as a drag on corporate earnings, keeping the pace of wage recovery moderate.
“The output gap will remain in negative territory, and Japan's inflation rate is expected to return to the 0% range in the second half of 2023, when the surge in commodity prices comes to a pause.”

Japanese consumer confidence may have been dealt a surprising blow in mid-November as the economy unexpectedly contracted for the first time in a year, with GDP falling 0.3% in the third quarter of 2022.

“While the rise of inbound tourists is a bright spot for October-December and beyond, we see downside risks from the rising price of goods and the fear of another outbreak," Takeshi Minami, chief economist at the Norinchukin Research Institute, told Reuters in response to the results.

The strength of Japan’s currency, the yen (JPY), also factors into how consumers are feeling about the Japan economy. A weaker currency increases the price of imports, and generally weakens consumers’ purchasing power. It was also in part to blame for Japan’s latest GDP contraction.

In that sense, the yen has had to contend with a pronounced weakening this year, dipping more than 19% against the greenback this year (JPY/USD). The US Federal Reserve’s (Fed) early hawkishness to tame inflation, combined with the dollar’s status as a popular safe haven asset, have conspired to weaken the yen this year.

The yen has managed to gain some ground on the dollar as lower-than-expected inflation increased rumblings that the Fed would begin to put the brakes on its current pace of interest rises, with the currency jumping nearly 6% this month.

“Looking ahead, the Fed will continue to raise rates and the Bank of Japan will maintain its accommodative monetary policy for the time being,” Japanese bank MUFG wrote. They added:

“Meanwhile, although downward pressure on the yen will slowly ease as the unusual factors mentioned above fade, it is unlikely that there will be significant yen appreciation owing to Japan’s structural factors.”

While there are no direct Japan consumer confidence forecasts, there are outlooks for the measures driving them, namely things like GDP, employment and inflation.

Mizuho Group expected GDP growth in Japan next year to hit 1.8%, a slight downward revision on expectations published in April on account of rising commodity prices.

Meanwhile, Mizuho suggested unemployment could fall to 2.3% by 2024, with CPI also expected to move back towards zero, all indicators that would suggest an emboldening of consumer sentiment.

The Bank of Japan also downgraded its forecasts for key economic indicators at the end of October, expecting GDP to grow between 1.5% and 2% in 2023, with CPI forecast to trend between 1.5% and 1.8%.

Note that analysts’ views about Japan consumer confidence and the country’s economy may be wrong. Always conduct your own due diligence before trading, looking at the latest news, a wide range of commentary, fundamental and technical analysis. Never trade money you cannot afford to lose.

Housing market recession: Everything you need to know