If the dollar crashes can China’s yuan offer a global alternative?

China’s efforts to boost the global appeal of its currency, the yuan, has been playing out over several years; as recently as 31 December 2021, the People’s Bank of China (PBOC) reiterated that the internationalisation of yuan remained one of its key objectives in 2022.

Although PBOC officials have in the past been vocal that efforts to internationalise the yuan (CNY) have nothing to do with replacing the US dollar (USD), the war in Ukraine and the sanctions on Russia have led many to wonder whether the yuan can be a credible alternative.

The market certainly seems to think there is some weight to this idea, particularly as the war in Ukraine has seen the offshore yuan surge against the dollar.

Markets see value in the yuan

The Chinese currency exists in multiple forms, with the onshore yuan in China using the ticker CNY. The Hong Kong liquidity pool, which is traded internationally, goes by CNH.

Despite the best efforts of the PBOC to lower the value of the onshore yuan (CNY), thereby depreciating the value of CNH, market forces still see value in the offshore currency, which has again steadily climbed in recent days.

On Thursday, the USD/CNH exchange rate was down at 6.347, much lower than the 6.41 levels it had reached in the immediate aftermath of the PBOC’s actions.

The attraction of the yuan for investors, particularly during the Russia–Ukraine war, is understandable. With the US and its allies sanctioning Russia and limiting its access to the US dollar, Russia has built up its reserves of the yuan. Saudi Arabia has also been reported to be considering selling oil using yuan as the currency in some deals.

But economists see the idea that the yuan could ever become the preferred currency for global trade and central bank reserves as far-fetched; as far as they are concerned, the dollar remains firmly in front.

International Monetary Fund (IMF) data shows that in the third quarter of 2021, the dollar made up just over 59% of global foreign exchange reserves, while yuan accounted for just 2.7%.

While the US currency’s share of global reserves has fallen over the past few years, few believe its dominance would be challenged, even in the event of a dollar crash – which David Woo, former top-ranked Wall Street analyst and CEO of David Woo Unbound, believes could happen to the overpriced currency.

Yuan no challenger to the USD throne

According to Yu Yongding, a noted economist and former adviser to the PBOC, in an interview with Capital.com, the country’s efforts to internationalise the yuan “is not aimed at replacing the US dollar”.

Yu says the yuan cannot replace the US dollar and does not think the war in Ukraine has changed much in the progrees of the yuan’s internationalisation.

“To make the yuan the settlement currency is not related with geopolitics. It is entirely for commercial purposes,” he says.

“Some Chinese economists thought it is a great endeavour and is an ultimate goal that China should strive to achieve. I do not think so.”

Long way to catch up for CNY

Yu’s disregard for the notion that the yuan can replace the US dollar is borne out by the data. Despite its challenges to the US dollar’s domination as the global reserve currency, the yuan is far from emerging as a viable alternative.

According to a recent paper by the IMF, not only is the yuan starting out quite behind the greenback, but the shift out of US dollars “is not overwhelmingly a shift” into the yuan.

The paper finds that only a quarter of the shift away from the dollar has gone to the yuan, while other non-traditional reserve currencies make up the remaining three-quarters.

“I am for the internationalisation [of the yuan], but it is a long, market-driven process. There were and will be ups and downs in the process. I do not see anything significant has happened at the moment, which will affect the process of yuan internationalisation. — Yu Yongding, economist and former adviser to the People’s Bank of China 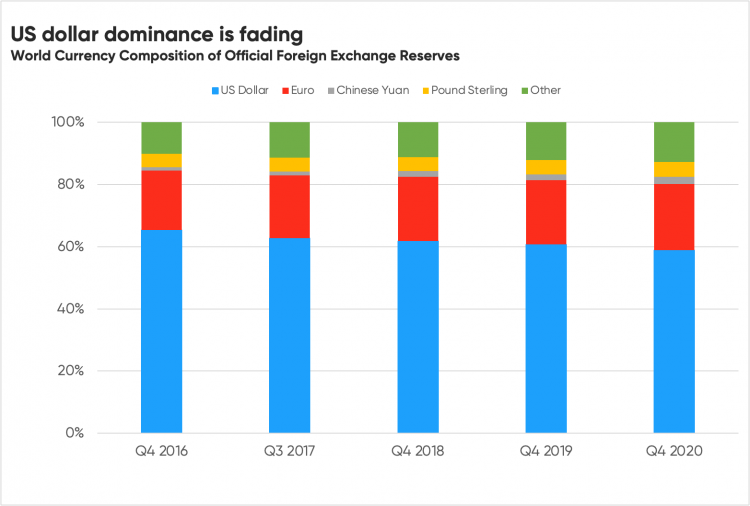 While dollar dominance is fading and the yuan is increasing, the US currency remains overwhelmingly dominant - Chart: Capital.com; data: IMF

Nathan Chow, senior economist at Singapore-based DBS Bank, says the yuan will certainly see a rise in its use and demand in the short term, but not enough to topple to the US dollar.

Chow told Capital.com: “Russia has been decreasing its US dollar share in global trade and forex reserves since 2014. The ongoing conflict will further this development.

“Alongside China’s initiatives, including BRI (Belt and Road Initiative) and RCEP (Regional Comprehensive Economic Partnership), the regionalisation of the yuan is set to gain more traction.

“Saudi’s oil deals, if they materialise, might help, too. Proliferation of the digital yuan in cross-border use will also give an extra boost in the medium term.”

Chow added: “From a global perspective, the US dollar will likely remain unchallenged (in the medium term) on major fronts such as FX turnover, international debt and loan denominations.

“(In the) longer term, while China’s growing size and economic power should translate into currency dominance, the progress hinges on a range of factors such as offshore liquidity, stability and convertibility of the yuan. In light of this, China’s capital account liberalisation is the key still.”

Alicia Garcia-Herrero, chief economist for Asia-Pacific at Natixis, agrees. She said the yuan will not be seen as a real alternative to the US dollar until its keeps a “rather close capital account”.

Pros and cons of the war

The war in Ukraine has its pros for the yuan, but also some glaring cons, according to Garcia-Herrero.

“On the one hand, it has fostered the use of yuan as alternative currency, following the example of Russia. In fact, many other economies may be fearing sanctions from the US, so they may prefer to reduce their use of the US dollar,” she told Capital.com.

“However, the war is also exposing China because of its cosy relationship with Russia. In fact, China experienced the largest portfolio outflows on record in the month of March, weakening the yuan,” she adds.

She concludes: “Even if the USD were to crash, it seems more likely to benefit the euro, yen, pound sterling and other smaller reserve currencies. There are very few things you can do with a yuan outside of China still today.” 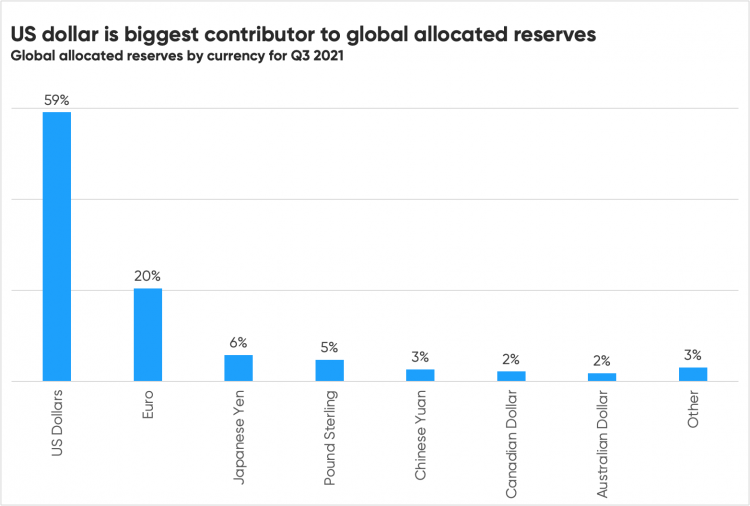 Dollar and euro form nearly 80% of global reserves: as well as the yuan, the Australian and Canadian dollars are also building up reserve status - Chart: Capital.com; Data: IMF

China will ring in reforms gradually

However, Linan Liu, managing director and head of Greater China Macro Strategy at Deutsche Bank, expects China to bring in the reforms needed for the yuan to slowly emerge as an alternative to the US dollar.

Liu told Capital.com: “We believe the Chinese yuan will continue to gain importance in settling global trades and investments over time. We have seen rising demand for yuan for trade settlement and for reserve management, which will support yuan internationalisation over the medium to long term.

“Already, the Chinese yuan has become the fifth global payment currency (as at February 2022) according to SWIFT, and we expect settlement volumes to grow 10%–15% yearly over the next five years.

“This will be on the back of continuing financial reforms in China, which we expect will deepen collaboration with global central banks to strengthen the role of the Chinese currency.”

Yuan internationalisation to be driven by market forces

Liu also agrees with other experts that the internationalisation of the yuan is more of a market-driven than a geopolitical issue.

She said: “Internationalisation of the yuan is a market-driven process, which depends on a number of factors including market demand, payment infrastructure and the size of the yuan asset market.

According to Garcia-Herrero, China is trying to internationalise the yuan as an alternative of a convertible currency: “In fact, the Chinese monetary and financial authorities seem to have high hopes for the cross-border use of the E-CNY (the digital yuan) as international currency, but this will be difficult.”

She adds: “Even Russia today is hesitant to see the E-CNY circulate widely in its economy, as it would reduce the demand of an already very weak rouble.”

Lack of acceptance outside China

But it is the lack of value for the yuan outside of China that will be the biggest hurdle for the currency if it is to ever challenge the hegemony of the US dollar.

Neil Shearing, group chief economist at Capital Economics says in a note: “For a currency to be widely used as an international medium of exchange, it must be readily and cheaply available globally.

“In turn, that depends on foreigners being willing to hold it in large volumes: In other words, it must function as a store of value. Foreign demand for dollar assets creates the deep and liquid markets that underpin the dollar’s global dominance.”

Shearing concludes: “The sanctions on Russia will accelerate the development of bilateral trading blocs that use alternative currencies. In particular, it’s likely that over the next decade, more trade between China and its allies will take place in yuan.

“But this bloc is likely to account for a relatively small share of the global economy, and even then, it’s unlikely that the majority of its trade will take place in yuan. Wind the clock forward 10 years, and the most likely outcome is a more fragmented global financial system – but one that still has the US dollar at its core.”

China may act on yuan appreciation versus the dollar

Chile copper tax: Will miners pass on the costs and lift prices?

Bye-bye Boris: What does PM resignation mean for markets?

Capital.com If the dollar crashes can China’s yuan offer a global alternative?