Egypt has yet to breathe a sigh of relief following the signing of a $3bn rescue package with the International Monetary Fund (IMF).

According to the most recent data, inflation reached nearly 20% in November, while the Egyptian pound (EGP) continued to fall against the US dollar (USD). Meanwhile, signs of an economic slowdown are emerging.

A recession is a period of reduced economic activity. While there is no universal definition of when a country is in an economic downturn, the general rule is when the gross domestic product (GDP) falls for at least two consecutive quarters. This is also referred to as a technical recession.

The IMF has more details about the recession. According to the Fund, a recession occurs when a country’s GDP falls by at least 2%. In severe recessions, output could fall by nearly 5%.

A recessionary economy has rising unemployment but falling inflation as overall demand for goods and services tumbles. During periods of slowing activity, exports and imports fall. Industrial production and investment fall much more sharply than GDP, while consumption declines only mildly.

There are numerous factors that can cause an economy to enter a recession, such as an aggressive rate hike to combat high inflation. When a central bank raises its policy rate, it raises borrowing costs for businesses and individuals, which reduces spending and slows economic activity.

The Covid-19 pandemic in 2020, which brought economic activity to a halt due to lockdowns, also caused recessions in several countries.

Is Egypt in a recession? 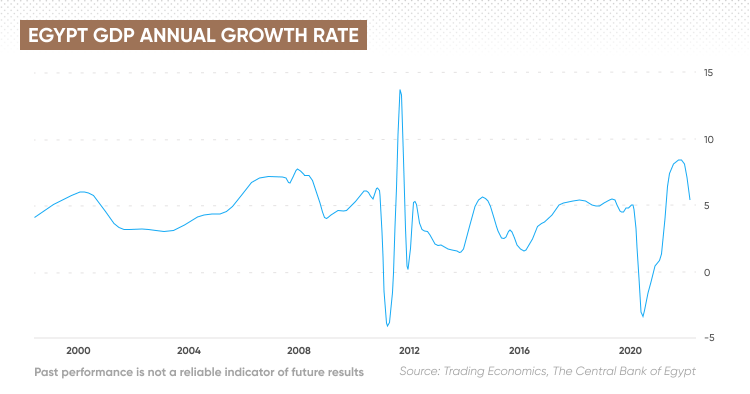 Based on data compiled by data aggregator Trading Economics, Egypt’s annual economic growth rate reached an all-time high of 13.77% in the third quarter of 2011. The economy hit a record low of -3.80% in the first quarter of 2011 when it was rocked by pro-democracy protests.

Taking a closer look at recent data, Egypt’s economy grew steadily between January 2019 to the first quarter of 2020 with quarterly growth of between 4.3% to 5.4%.

Stable global economic growth, lower oil prices and a benign inflation rate in developed economies supported growth in Egypt’s economy in the period, according to a report from the Central Bank of Egypt (CBE).

Egypt’s economy contracted by 3.1% in the quarter ending July 2020 and 1.3% in the following quarter as Covid-19 restrictions slowed activities, particularly tourism.

Growth started to slow after July as the CBE aggressively increased interest rates to combat inflationary pressure that stemmed from rising commodity prices, partly triggered by Russia’s invasion of Ukraine and monetary tightening in developed countries.

The CBE has raised the policy rate by a total of 500 basis points (bps) since it started the tightening cycle March to combat inflation. The CBE’s policy rate stood at 13.25% by October from 9.25% in March 2022.

Egypt’s economic crisis has been caused by several global shocks. Rising commodity prices, including wheat and sunflower– main staples in Egypt – has contributed to the red hot inflation.

On the brink of Egypt’s economic collapse, the country reached out to the IMF for aid. On 27 October, the IMF announced it agreed to provide a $3bn Extended Fund Facility (EFF) Arrangement.

Inflation shows no signs of cooling

Inflation in November surged to an annual rate of 19.2%, the Egypt Statistics announced. This was higher than the 16.3% in October and 6.2% in November 2021.

On 27 October, Fitch Solutions forecast inflation in Egypt could remain in double digits throughout 2023. The firm increased its 2022 forecast for Egypt’s inflation to 13.6% and 14% if the government adjusted electricity tariffs in July 2023 and continued to increase administered prices. 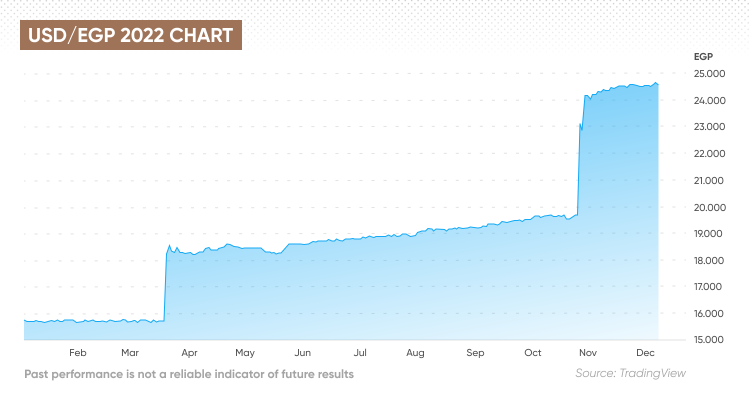 The Egyptian pound has continued to depreciate since the CBE devalued the official currency in March. According to Reuters’ report, the country devalued the pound by 14% after foreign investors pulled billions of dollars out of Egypt following Russia’s invasion of Ukraine.

The US dollar to Egyptian pound (USD/EGP) exchange rate rose nearly 16% to 18.17, reflecting a stronger USD on 21 March following the devaluation.

“The decline in the pound was not unexpected as Egypt suffered from both this year's food inflation shock and higher global interest rates,” ING Group wrote in a note on 27 October.

“While part of the subdued growth is driven by slow activity between July 2022 and December 2022 due to the distortion in the market from import controls that brought manufacturing activity to a halt, additional problems derive from weak tourism activity and an increase in the cost of living that is weighing on consumption.”

These base effects were likely to impede recovery between January and June 2023, when the country was expected to address foreign currency shortages and remove import restrictions, it added.

Except for Trading Economics, Fitch Solutions and IMF projected Egypt’s economy to slow in 2023.

However, when looking at Egypt’s recession forecasts, it’s important to bear in mind that analysts’ forecasts can be wrong. Forecasts shouldn’t be used as a substitute for your own research.

Always conduct your own due diligence. Remember that your decision to trade or invest should depend on your risk tolerance, expertise in the market, portfolio size and investment goals. And never trade money that you cannot afford to lose.

EUR/USD 1.08107
Trade
-0.850%
USD/JPY 131.065
Trade
+1.780%
GBP/USD 1.20651
Trade
-1.270%
AUD/USD 0.69332
Trade
-1.900%
GBP/JPY 158.125
Trade
+0.490%
The difference between trading assets and CFDs
The main difference between CFD trading and trading assets, such as commodities and stocks, is that you don’t own the underlying asset when you trade on a CFD.
You can still benefit if the market moves in your favour, or make a loss if it moves against you. However, with traditional trading you enter a contract to exchange the legal ownership of the individual shares or the commodities for money, and you own this until you sell it again.
CFDs are leveraged products, which means that you only need to deposit a percentage of the full value of the CFD trade in order to open a position. But with traditional trading, you buy the assets for the full amount. In the UK, there is no stamp duty on CFD trading, but there is when you buy stocks, for example.
CFDs attract overnight costs to hold the trades (unless you use 1-1 leverage), which makes them more suited to short-term trading opportunities. Stocks and commodities are more normally bought and held for longer. You might also pay a broker commission or fees when buying and selling assets direct and you’d need somewhere to store them safely.
Capital Com is an execution-only service provider. The material provided on this website is for information purposes only and should not be understood as an investment advice. Any opinion that may be provided on this page does not constitute a recommendation by Capital Com or its agents. We do not make any representations or warranty on the accuracy or completeness of the information that is provided on this page. If you rely on the information on this page then you do so entirely on your own risk.