Dutch Title Transfer Facility (Dutch TTF) gas futures, the benchmark natural gas price in Europe, has dipped to levels seen before the war between Russia and Ukraine. European gas prices have been driven largely by supply and demand since the invasion.

Back in August, Dutch TTF gas futures hit a fresh record of above €346 per megawatt-hour (MWh) after Russia’s energy giant Gazprom announced a shutdown of key gas pipeline Nord Stream 1 for routine maintenance.  The pipeline hasn’t resumed operation since maintenance ended on 3 September and remains closed indefinitely as of 9 November.

Last month, the European Commission considered a “dynamic” price cap on TTF futures, although it has been largely recognised by the Dutch Financial Markets Authority (AFM) as a measure that would “do little to address the fundamentals of excessive energy prices ... in the EU.”

In this article, we examine the commodity’s historical prices, recent performance and drivers that could potentially contribute to Dutch TTF gas futures price predictions.

What are Dutch TTF gas futures?

The Dutch Title Transfer Facility is a virtual marketplace in the Netherlands to buy and sell natural gas injected to a transport system operated by Gasunie Transportation Service (GTS). Futures contracts are legal agreements for assets to be bought at predetermined prices but delivered and paid for later.

Gasunie is the owner and operator of the Netherlands’ gas transmission networks. Since it was founded in 2003, the Dutch exchange has become the benchmark price for natural gas in Europe.

The amount of gas traded on the Dutch TTF has grown to 14 times of Netherlands’ consumption, according to GTS.

It is important to note that futures contracts and natural gas spot contracts are two different instruments, with the latter effectively being a ‘buy now, pay now’ deal for the immediate delivery of the asset.

According to Investing.com data, Dutch TTF gas futures slid to a historic low of €3.36 per megawatt hour (MWh) in 2020 during the Covid-19 pandemic as restrictions to curb the disease crushed energy demand. Prices rebounded in the second half of the year.

Dutch TTF gas futures’ uptrend continued in 2021, propelled by growing demand, low inventories and poor renewable performance. The price touched the highest for the year at €187/MWh on 21 December, before retreating to €70 on the last day of 2021. 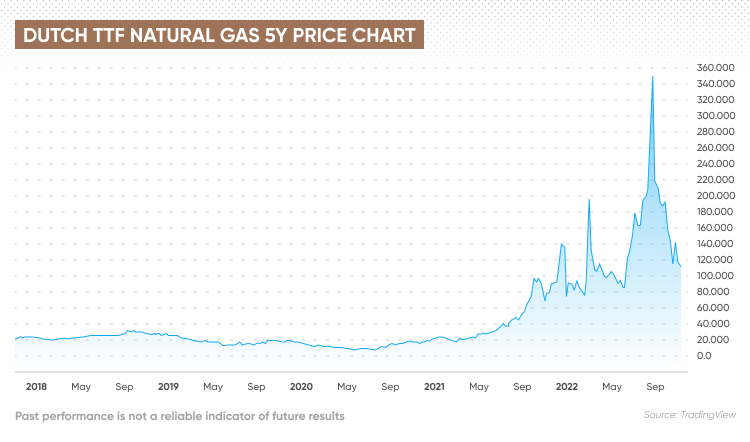 In the first weeks of 2022, Dutch TTF cooled before rallying to an all-time intraday record of €345/MWh on 7 March, according to data from Investing.com, after Russia sent its troops to Ukraine on 24 February.

Dutch TTF gradually retreated to below €110/MWh in the second half of 2022, before recovering to above €200/Mwh at the end of July after Russia further cut its gas supplies to Nord Stream 1.

Since hitting a fresh high of €346.52 on 26 August, Dutch TTF gradually eased to below €220 as fear of supply shortage for the winter subsided. It briefly spiked to €223 on 28 September following the discovery of leaks on Nord Stream 1 and Nord Stream 2.

As of 9 November, Germany’s gas storage level stood at 99.55%, meeting its 95% target, according to German government data. Dutch TTF gas futures currently stand at around €118/MWh.

Fitch Solutions’ Dutch TTF gas futures price forecast for 2022 expected the commodity to retreat from current levels to an average €150/MWh in 2022.

For the longer term, Fitch Solutions’ expectation for new investment to repair the damaged gas pipelines may be affected by moves to reduce European reliance on Russian natural gas.

According to economic data provider TradingEconomics:  “Dutch front-month futures were trading around €115 per megawatt-hour (MW), not far from a four-month low of €99 hit on October 24th and well below the summer peak of €339, as mild weather dented demand for energy-intensive heating.

“The unseasonal warmer front in Europe created a larger safeguard for the usage of natural gas in storage for colder months ahead, while EU member states coordinate alternative supply routes for the next year. Meanwhile, the European Commission signalled it won’t cap fuel prices and proposed a mechanism to limit excessive spikes and spread the soaring costs over time.

“Uncertainty regarding flows through the Yamal pipeline remains as geopolitical tension with Moscow heightens, while flows via Nord Stream 1 have already been disregarded due to the pipeline’s damage. In the meantime, constraints persist on how much more LNG Europe can import, as global competition for LNG could attract cargoes to other markets.”

Fitch Solutions expected Dutch TTF to ease in the short term, while Trading Economics saw the futures having an upside in 12 months’ time.

When looking for Dutch TTF gas futures price predictions, bear in mind that analysts’ forecasts can be wrong. Past performance is not a reliable indicator of future results.

Always do your own research. Your decision to trade depends on your attitude to risk, your expertise in this market, the spread of your investment portfolio and how comfortable you feel about losing money. Never invest more money than you can afford to lose.

Natural Gas 2.468
Trade
-1.910%
Oil - Crude 76.02
Trade
-1.000%
Gold 1916.59
Trade
-1.720%
Oil - Brent 82.13
Trade
-0.980%
Silver 23.511
Trade
-1.780%
The difference between trading assets and CFDs
The main difference between CFD trading and trading assets, such as commodities and stocks, is that you don’t own the underlying asset when you trade on a CFD.
You can still benefit if the market moves in your favour, or make a loss if it moves against you. However, with traditional trading you enter a contract to exchange the legal ownership of the individual shares or the commodities for money, and you own this until you sell it again.
CFDs are leveraged products, which means that you only need to deposit a percentage of the full value of the CFD trade in order to open a position. But with traditional trading, you buy the assets for the full amount. In the UK, there is no stamp duty on CFD trading, but there is when you buy stocks, for example.
CFDs attract overnight costs to hold the trades (unless you use 1-1 leverage), which makes them more suited to short-term trading opportunities. Stocks and commodities are more normally bought and held for longer. You might also pay a broker commission or fees when buying and selling assets direct and you’d need somewhere to store them safely.
Capital Com is an execution-only service provider. The material provided on this website is for information purposes only and should not be understood as an investment advice. Any opinion that may be provided on this page does not constitute a recommendation by Capital Com or its agents. We do not make any representations or warranty on the accuracy or completeness of the information that is provided on this page. If you rely on the information on this page then you do so entirely on your own risk.