What is the business case?

Deliveroo share price history: How has the stock performed?

Three sides to the Deliveroo business

Deliveroo (ROO) share price forecast: Where next for the stock?

Deliveroo share price forecast: Is ROO a buy or sell?

Deliveroo is a food delivery service that works with 160,000 restaurants and grocery partners in 800 locations around the world. It employs more than 180,000 riders.

The London-based company was founded by William Shu and Greg Orlowski in 2013. It went public last year. Its stock price has been very volatile due to a combination of the loosening of Covid-19 restrictions and increasing global competition.

In this analysis we take a look at Deliveroo’s recent results, assess its business model and ask analysts for their stock price projections.

What is the business case?

Deliveroo aims to be the “definitive online food company”.

Its operations are divided into the UK and Ireland, and international, which covers the remainder of the company’s markets. 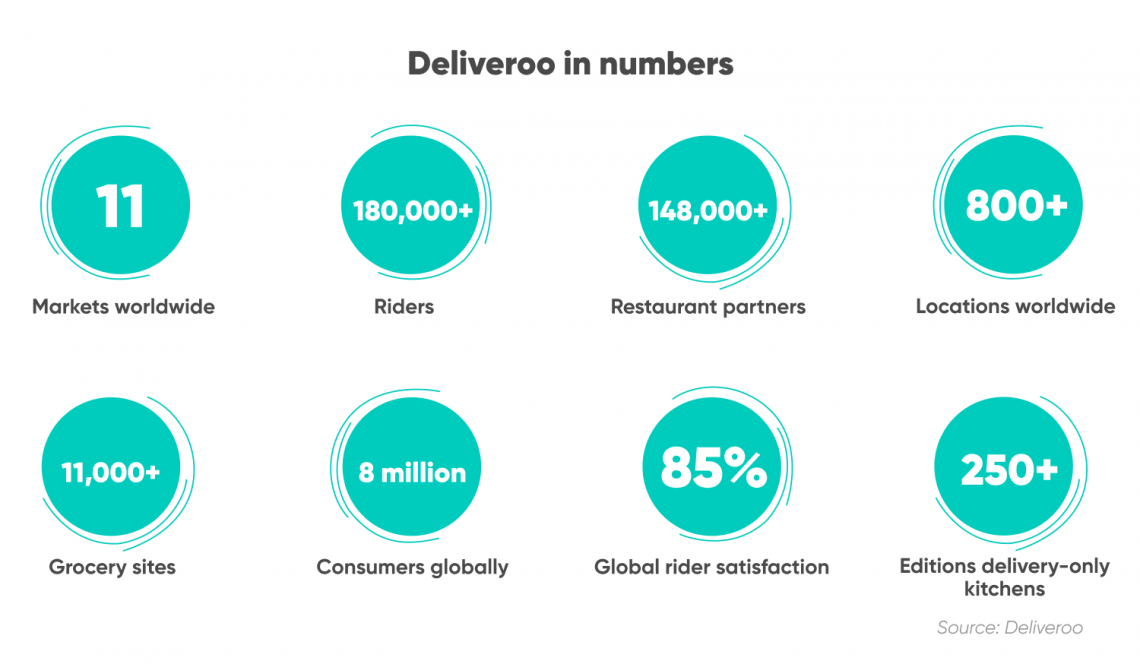 Deliveroo share price history: How has the stock performed?

Deliveroo stock started trading on the London Stock Exchange on 7 April 2021, with the initial public offering (IPO) price set at £3.90 a share. 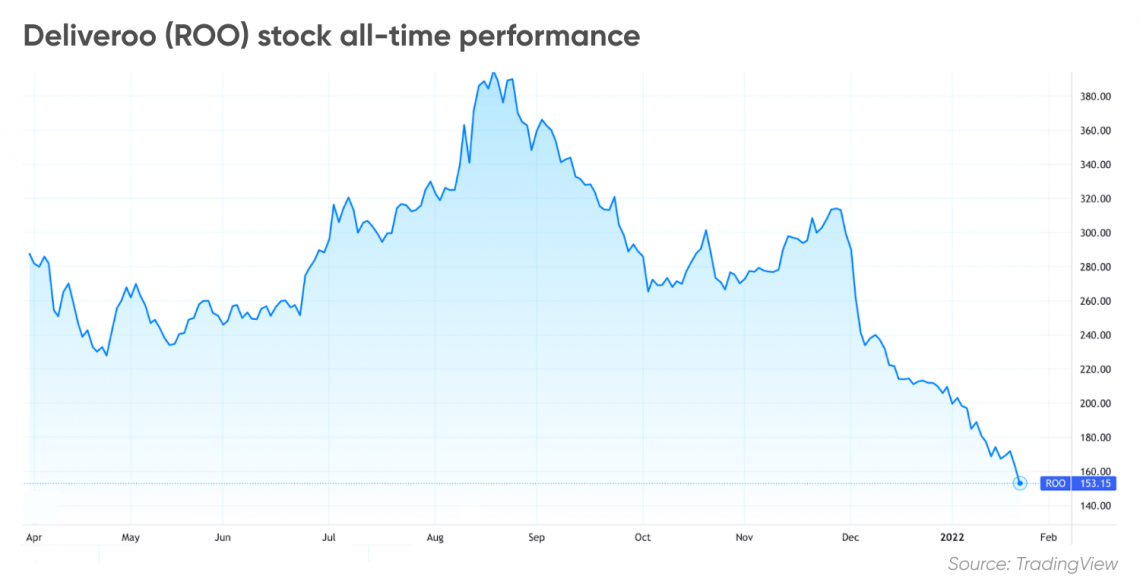 “For the full year, gross transaction value (GTV) increased to £6.73bn on a reported basis, including results from Spain until operations ended in November 2021,” it stated.

On a pro forma basis – without Spanish operations included – full year GTV was £6.63bn, a year-on-year increase of 67% in reported currency and 70% in constant currency.

As far as the fourth quarter of 2021 was concerned, GTV came in at £1.73bn, a year-on-year increase of 33% in reported currency and 36% in constant currency.

It’s worth remembering this comparison was with the fourth quarter of 2020 that included lockdown restrictions in many markets.

“Growth in monthly active consumers and orders continued to be healthy, up 37% and 42% year-on-year, respectively,” added the statement.

Shu branded it “another extraordinary year”, with the company having finished 2021 with a strong fourth quarter performance.

“I am proud of what we achieved in 2021,” he said. “Despite a challenging backdrop, we continued to strengthen our customer proposition, widen our customer base and execute against our strategy,” he added.

Shu pointed out Deliveroo’s focus had always been to deliver great experiences to consumers, help partners to grow and provide opportunities for riders.

“We are excited about the opportunity ahead and look forward to making further progress in 2022,” he said.

In September 2021, Deliveroo announced new and existing Amazon Prime members in the UK and Ireland could get free delivery on orders over £25.

Lisa Leung, director of Prime and Marketing for Amazon UK, said the company was always looking for ways to offer value to Prime members.

“That is why we are excited for this offer with Deliveroo – so millions of Prime members in the UK and Ireland can get the convenience of great meals delivered fast,” she said.

“Although tapping into the vast pool of prime members is an opportunity for Deliveroo, especially if the partnership extends to other countries in future, it’s still unclear what percentage of the subscriber uptick is made up of current Deliveroo customers and new customers,” he wrote.

Three sides to the Deliveroo business

Deliveroo has described itself  as a hyperlocal three-sided marketplace. “Our platform connects local consumers, restaurants and grocers, and riders to fulfil a mission critical, emotional purchase in under 30 minutes,” it stated.

How the world eats has changed dramatically, according to a report by management consultants McKinsey & Company, entitled ‘Ordering in: The rapid evolution of food delivery’.

“A little under two decades ago, restaurant-quality meal delivery was still largely limited to foods such as pizza and Chinese,” it stated. “Nowadays, food delivery has become a global market worth more than $150bn, having more than tripled since 2017.

In the United States the market has more than doubled during the Covid-19 pandemic, following healthy historical growth of 8%.

“Lockdowns and physical-distancing requirements early on in the pandemic gave the category an enormous boost, with delivery becoming a lifeline for the hurting restaurant industry,” it stated. “Moving forward, it is poised to remain a permanent fixture in the dining landscape.

Susannah Streeter, senior investment and markets analyst at Hargreaves Lansdown, told Capital.com there were positives and negatives for would-be investors.

“There is a tight pack of competitors jostling for position in the delivery sector,” she said. “Although Deliveroo has delivered some tastier results for the fourth quarter, it still faces an uphill struggle.”

Many consumers are likely to be fed up with putting in yet another stint in the kitchen, she suggested, and keener to visit pubs and restaurants over the coming year.

“It’s also still reliant on self-employed riders, unlike its rival Just Eat Takeaway which has already committed to employing more workers,” she said. “New EU rules could make it much harder to sustain the gig economy model.”

Streeter also highlighted marketplace competition. “The convenience delivery sector has been a growing part of its business but rivals are gaining ground and as more people venture out, sales could fall,” she warned.

The problem with companies benefiting from lockdown restrictions is investors assume their star will wane as life gets back to normal, according to Danni Hewson, financial analyst at AJ Bell.

“Deliveroo is one such beast, but while it has enjoyed a boost to its business, its share price hasn’t followed suit,” she told Capital.com. “In fact, shares are now valued at less than half of their float price which some intrepid investors could see as a massive opportunity.”

However, Hewson pointed out that it wasn’t clear what would happen to the company once consumers feel more confident returning to restaurants.

“There are a huge number of variables Deliveroo will have to contend with, including lingering concerns about its employment model and whether regulations will result in increased costs,” said.

Deliveroo (ROO) share price forecast: Where next for the stock?

Are Deliveroo shares a buy, sell or hold? The consensus view of four analysts compiled by MarketBeat (as of 24 January) put the stock as a ‘buy’, with a price target of 355.50 in a year’s time. This represents a premium of 119% over its current level. The lowest price estimate was at 247p, while the highest one was 440p.

According to the algorithmic Deliveroo share price forecast from Wallet Investor (as of 24 January), Deliveroo could be an “awesome long-term (one year) investment”.

Although the service did not share price targets for 2030, the Deliveroo expected share price for January 2026 was 0.000001p.

One must exert caution when considering algorithm-based predictions. They use historical data to make their estimates. The fact that the stock is relatively new to the market may affect valuations and make long-term Deliveroo share price prediction inaccurate. Analysts’ forecasts can also be wrong.

It’s important to do your own research, considering market trends, the company’s latest news and fundamentals. Always remember that your decision to trade depends on your attitude to risk, your expertise in the market, the spread of your investment portfolio, and how comfortable you feel about losing money. And never invest more than you can afford to lose.