The Canadian dollar (CAD) has put in a solid performance against the US dollar (USD) this year, finding support from soaring oil prices and as the Bank of Canada (BoC) hiked interest rates aggressively.

However, with oil prices slipping lower and Canadian inflation showing signs of cooling, can the loonie keep pace with the USD across the rest of 2022? Read on for the latest Canadian dollar forecast.

In March 2020, the Canadian dollar fell to its lowest level against the US dollar in over four years as the Covid-19 pandemic led to oil prices tumbling. The USD/CAD pair rose to 1.4668; a level last seen on 1 January 2016.

Trading across 2022 has been choppy as investors weigh up a more aggressive stance on tightening monetary policy from the US Federal Reserve (Fed), rollercoaster oil prices and a surprise 100 basis-point (bp) rate hike from the BoC.

Key drivers of the Canadian dollar

The Canadian dollar, also known as the loonie, is Canada’s national currency and is issued by the BoC.

Several key factors influence the supply and demand of CAD in the market and drive the price.

Central bank monetary policy is a key influence on a currency’s value, driving supply and demand. When a central bank raises interest rates, demand for that currency often rises compared to currencies where interest rates are lower. In other words, the difference in interest rates and interest rate expectations between one currency and another drives movement in the pair.

Whether the central bank is raising or cutting interest rates depends largely on the inflation rate and the economy’s health. Central banks pay close attention to economic data to gain insight into how the economy is performing. Data of interest includes inflation figures, gross domestic product (GDP), and labour market data, in addition to manufacturing and service sector figures.

As is often the case with countries that rely on commodities for a large portion of their exports, the performance of its currency is often correlated to the movement of commodity prices. In the case of Canada, this is related to the price of oil, the country’s main export. When oil prices rise, the CAD often rises; when oil prices fall, the loonie will often decline.

The BoC has raised rates four times so far this year. The most recent hike was in July when it increased the key lending rate by 1%, its largest rate hike in over 20 years, as it continued to fight against four-decade high inflation.

The bank caught the market off guard with the supersized hike after a 0.75% rate rise had been priced in. The move has taken the benchmark lending rate to 2.25% and highlights policymakers’ concern about stubbornly high inflation.

Looking ahead, the future path for interest rate hikes could play an important role in the direction of the CAD. The BoC still has three more monetary policy meetings in 2022, with the next one set for 7 September.

Whether the BoC continues hiking rates aggressively depends on what macroeconomic data shows.

Sal Guatieri, senior economist at BMO Capital Markets, said he expects the BoC to hike rates less aggressively in the September meeting. He forecast a 0.5% hike in September after the 1% hike in July, as the Canadian economy weakens.

“Following the Bank's jumbo 100-bp hike last month and the Fed's second straight 75-bp punch, both central banks are expected to scale back to smaller 50-bp moves in September due to the weaker economy. Following two additional moves later this year, both are expected to pause in 2023 as the economy stalls and inflation falls.”

Canadian inflation cooled slightly in June, with the month-on-month Consumer Price Index (CPI) increasing at a lower than expected 0.7%, softer than the 0.9% increase forecast and down from the previous month’s 1.4% rise. However, on an annualised basis, inflation rose 8.1%, up from 7.7% a fresh 40-year high, but below the 8.5% forecast.

The data boosts hopes that inflation in the region may be peaking, which would take pressure off the BoC to hike rates aggressively across the remainder of the year.

Meanwhile, growth in Canada has slowed considerably. The Canadian economy recorded 0% growth in May for the  second straight month. However, according to the Conference Board of Canada chief economist Pedro Antunes, the Canadian economy could still avoid a recession, saying:

“On 13 July 2022, the Bank of Canada raised its key policy rate by a full percentage point. The Bank is aware of the challenges ahead and has chosen to push harder than expected on the brake pedal, promising to continue to raise rates as needed to quell inflation. We believe the Bank will be successful at engineering a soft landing, but the risk of a recession in Canada remains very palpable.”

The unemployment rate in Canada was just 4.9% in July, a historic low, and job vacancies are very high across every segment of the economy. 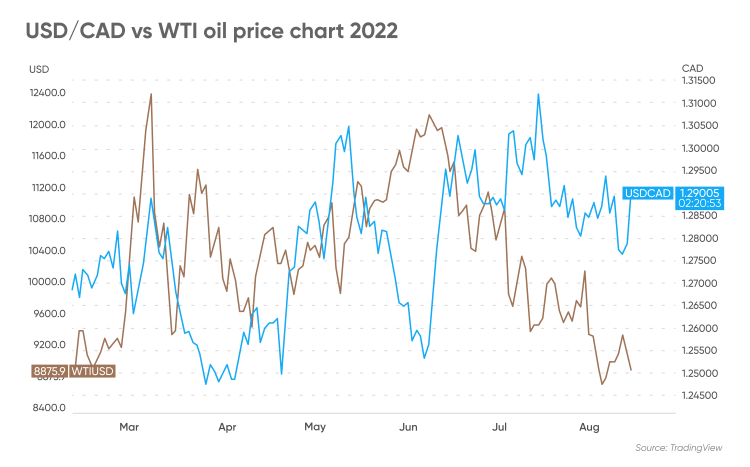 Oil jumped to a high of $123 a barrel in March and was still trading around $120 a barrel in early June. Oil trade is up by about $10 per barrel so far this year.

However, it is worth noting that more recently, oil prices have come under pressure amid growing concerns over a global economic slowdown which is hurting the oil demand outlook.

A technical recession in the US and slowing economic growth in China have pulled oil prices to the lowest level since early February, under $90 a barrel. Should oil prices continue to fall, the loonie could come under further pressure.

Canadian dollar forecast for 2022 and beyond 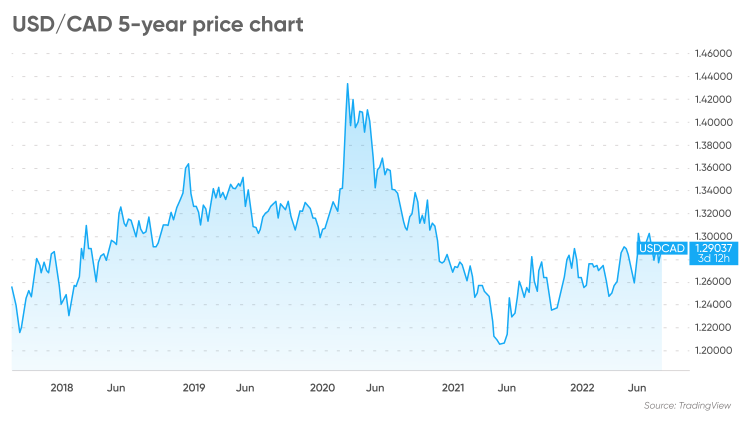 Analysts at ING Canadian dollar forecast for 2022 saw CAD/USD exchange rate at 1.23 by the fourth quarter of the year, falling from 1.27 in the third quarter.

Analysts at the National Bank of Canada were also bullish in their CAD prediction, although less so than analysts at ING. They expected the USD/CAD pair to trade at 1.27 by the start of the fourth quarter.

TradingEconomics expected the CAD to be priced against the USD at 1.29 by the end of this quarter, and looking ahead, the USD/CAD forecast will rise to 1.34 in 12 months.

In addition to the USD/CAD forecast, the data provider gave price targets for EUR/CAD, GBP/CAD, and AUD/CAD.

Note that analysts and algorithm-based USD/CAD forecasts can be wrong. They shouldn’t be used as a substitute for your own research. Always conduct your own due diligence before trading, looking at the latest news, technical and fundamental analysis, and analyst commentary. Past performance does not guarantee future returns. And never trade money that you cannot afford to lose.