Shares of Alphabet, Google’s parent company, are up over 7% since Thursday’s close as the company reported on Friday that it would be cutting 12,000 jobs. The decision was made to face the changing economic environment the company is facing as higher interest rates and inflation take their toll.

There had been a hiring spree since Covid-19 as the company experienced a period of rapid growth but in the memo released on Friday Sundar Pichai, Alphabet’s CEO since 2019, said the decision to hire up until last year was made for a different economic reality and that it would reengineer its workforce to focus on their highest priorities.

The reaction in the stock price evidenced that investors saw this as a step in the right direction. Was the decision unexpected? Not at all. Alphabet is the latest on a list of tech companies (including Meta and Microsoft) to announce massive layoffs in the last few months as the industry faces a challenging economic outlook. One could say from the market reaction that investors were waiting for this to happen and were actually relieved when it did.

The bulk of its revenue is derived from its google advertising services, which is expected to come in at $61.56bln for the fourth quarter. This means it is forecasted to be $7bln more than in Q3 but we may see how companies cut their advertising budgets amidst slowing consumer demand and recession concerns, meaning we may see a slight miss on this figure which would likely see some disappointment in the share price. Nonetheless, even if advertising revenue comes in line or beats expectations, investors will want to know more about what the company expects in the next few quarters.

What is your sentiment on GOOGL?

Give GOOGL a try

As with Microsoft, one of the focal points of the earnings call will be the update on the outlook regarding the AI investment. In fact, in the memo released on Friday when the job cuts were announced, Pichai mentioned their early investment in AI as one of the high opportunities going forward. But there is increased competition, most notably from Microsoft’s intention to increase its stake in OpenAI.

Alphabet’s share price (GOOGL) is heading into its third week of gains after pushing away from its 2023 low (84.86 ) marked in the first few trading days. The bearish move in December was a continuation of the momentum seen throughout most of 2022 but it failed to break the yearly lows seen at the beginning of November (83.34) which consolidate the momentum for a reversal. Up ahead we can find resistance around 102.24 and we may see some consolidation around this area, as we did in March 2021, before moving higher. This is also where the bullish momentum got halted back in November.

The price-to-earnings ratio is currently at 20 which is below its average, even after the Covid-19 price drop, meaning the stock is perceived to be cheap relative to its value as compared to its past performance. 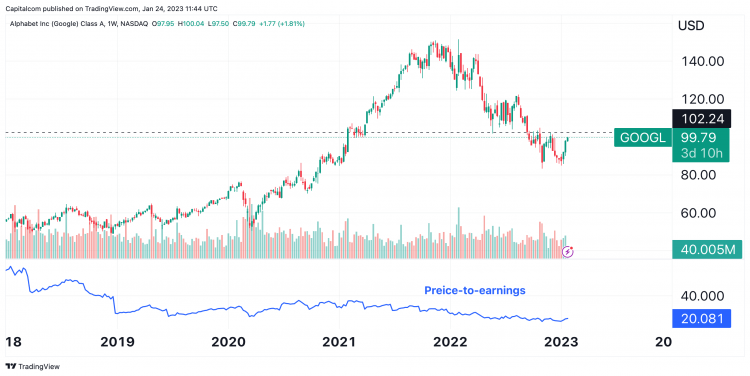 Natural Gas 2.761
Trade
+2.410%
US100 12034.6
Trade
+0.840%
BTC/USD 23120.30
Trade
+1.540%
XRP/USD 0.40379
Trade
+2.210%
Oil - Crude 79.20
Trade
+1.640%
The difference between trading assets and CFDs
The main difference between CFD trading and trading assets, such as commodities and stocks, is that you don’t own the underlying asset when you trade on a CFD.
You can still benefit if the market moves in your favour, or make a loss if it moves against you. However, with traditional trading you enter a contract to exchange the legal ownership of the individual shares or the commodities for money, and you own this until you sell it again.
CFDs are leveraged products, which means that you only need to deposit a percentage of the full value of the CFD trade in order to open a position. But with traditional trading, you buy the assets for the full amount. In the UK, there is no stamp duty on CFD trading, but there is when you buy stocks, for example.
CFDs attract overnight costs to hold the trades (unless you use 1-1 leverage), which makes them more suited to short-term trading opportunities. Stocks and commodities are more normally bought and held for longer. You might also pay a broker commission or fees when buying and selling assets direct and you’d need somewhere to store them safely.
Capital Com is an execution-only service provider. The material provided on this website is for information purposes only and should not be understood as an investment advice. Any opinion that may be provided on this page does not constitute a recommendation by Capital Com or its agents. We do not make any representations or warranty on the accuracy or completeness of the information that is provided on this page. If you rely on the information on this page then you do so entirely on your own risk.

Tesla Q4 2022 Earnings Preview: Is Too Much Negative News Baked in the Price?