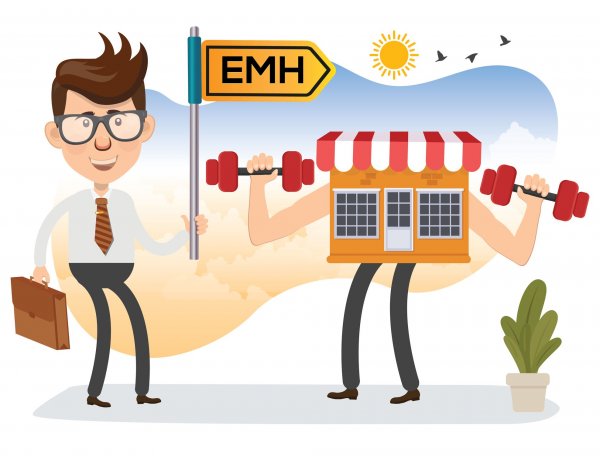 What is an efficient market hypothesis (EMH)?

The efficient market hypothesis (EMH) is a financial economics theory suggesting that asset prices reflect all the available information. According to the EMH hypothesis, neither fundamental, nor technical analysis may produce risk-adjusted excess returns consistently, since market prices should only react to new information.

The efficient market hypothesis meaning suggests that stocks on stock exchanges always trade at their fair value, providing investors with the opportunity to either buy undervalued stocks or sell stocks for inflated prices. Therefore, investors can’t beat the market with the help of market timing and expert stock selection. The only way for investor to gain higher returns, according to the EMH, is to make riskier investments.

Where have you heard about the efficient market hypothesis?

The efficient market hypothesis was developed by Eugene Fama in 1960s, following up the works by Muth, Bachelier, Mandelbrot and Samuelson. Eugene Fama was the first to propose a “strong” and “weak” forms of the EMH, but further refused from using these terms.

What you need to know about the efficient market hypothesis.

The EMH theory suggests that all known information about stocks is already factored into their market price. Therefore, no analysis would provide the investor with a benefit over other investors, collectively forming the market.

EMH doesn’t require rationality. It presupposes that investors act randomly, but as a whole the market is “right”. Efficient here means normal. For example, if everyone starts moving in one direction, its normal for an investor to follow, even if there is not a rational reason for it.

There are 3 forms of efficient market hypothesis: strong, semi-strong and weak. Let’s see what they say about the market.

The efficient market hypothesis does not imply that investors can’t outperform the market, it believes that there are always outliers beating the market averages, together with those who dramatically lose to the market. Still, the majority is closer to the median.

What are returns? The gains or losses you make on your investments over a certain period of...
Trade Now