How to trade using Bollinger Bands

What are Bollinger Bands?

Bollinger Bands are one of the most popular technical analysis tools implemented in today’s trading environment. As the name implies, Bollinger Bands refer to the bands (price channels) placed on a chart to represent a volatility range in which a particular security price goes up or down.

Bollinger Bands consist of three lines: the lower band, the middle band, and the upper band. The middle band is a 20-period simple moving average (SMA). The upper and lower bands are drawn on both sides of the SMA line, and the distance between the two is determined by standard deviations. 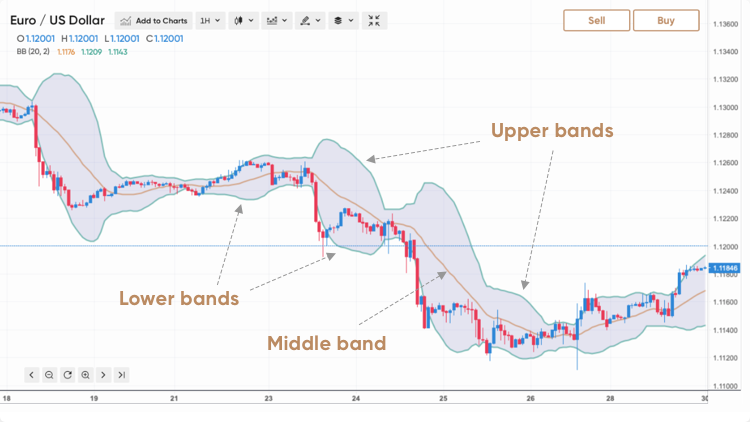 Bollinger Bands are typically charted over so-called 20-periods. Some traders make those periods hours, others prefer a longer-term approach and make those days. However, it doesn't necessarily have to be 20 periods – it is up to the trader what time frame to choose.

Here’s how to read Bollinger Bands. As the upper and lower bands represent standard deviation, it means they are based on price volatility. When the bands contract and lie close together, a period of low volatility is indicated.

Conversely, when the distance between the bands expands, an increase in market volatility or price action is found. If the bands begin to form a slight slope and track almost parallel for an extended period of time, the price will usually be found to swing between the bands as though in a channel. Defined by standard deviation, the bands also establish where the support and resistance levels might be. 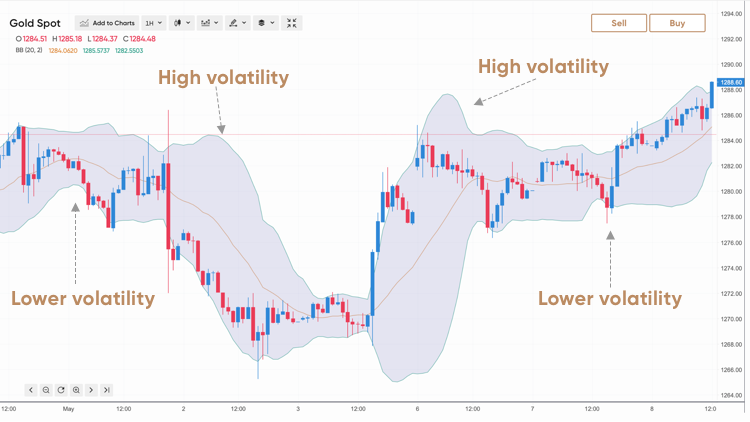 The main idea behind Bollinger Bands is that by comparing a stock's position relative to the bands, a trader gets an opportunity to determine whether a stock's price is relatively high or low. If stock prices continuously touch the upper Bollinger Band, the prices are considered to be overbought. Conversely, if they continuously touch the lower band, prices are thought to be oversold. These, in turn, serve as a buy or sell price signal.

Bollinger Bands are among the most reliable and effective trading tools you can possibly choose from. The Bollinger Bands indicator is considered to be infallible, as it always uses volatility to adjust to the current economic environment and price action in real time. As long as prices don’t move out of this band, the trader can be sensibly confident that prices are performing as expected.

Bollinger Bands, used by novices and experts, were invented by John Bollinger – an American financial analyst, author and contributor to the field of technical analysis.

He started developing Bollinger Bands in the early 1980s. Back then, he was involved in options trading, and most of his analytics revolved around volatility. When developing his concept, Bollinger took the Keltner Channel as an underlying basis. His idea was to incorporate volatility standard deviation to make trading bands more adaptive. He charted a 20-day moving average of the closing price with the bands on both sides, representing doubled standard deviations of the moving average. He found out that it effectively captured around 95 per cent of the variation away from the moving average.

Bollinger first introduced the concept to the world on Financial News Network in 1983. Published in 2001, his book “Bollinger on Bollinger Bands” has been translated into eleven languages. He has also coined the term ‘rational analysis’ in the trading environment as a method of analysing markets with a focus on the overlap between fundamental and technical factors.

Why are Bollinger Bands useful for traders?

Bollinger Bands provide traders with many advantages. In markets that tend to be rather volatile, the Bollinger Bands chart can be very useful in determining price pattern, reading the trend strength, timing entries during range markets and finding potential market tops in a dynamic, adaptive manner. The use of Bollinger Bands is often coupled with other analysis tools, so it can offer an objective view of the markets and act as a key decision zone for various trading strategies.

How to trade with Bollinger Bands

The use of Bollinger Bands varies among traders depending on their overall trading strategies, styles and goals. However, it is important to mention that Bollinger Bands trading is not limited to stock only: options and CFDs traders often successfully utilise this tool for their trading needs.

The overbought and oversold strategy is favoured by many. It relies heavily on Bollinger Bands and depends on the mean reversion of the price. Mean reversion expects that, if the price significantly deviates from the average, it will eventually revert back to the mean price.
As we already know, Bollinger Bands identify asset prices that have deviated from the mean. Thus, when the price of the asset breaks below the lower band, a trader can enter a long position seeking the price to revert back to the SMA band. Conversely, when the price breaks above the upper band, the trader can short the asset betting on a move back to the middle band.

Another Bollinger Bands strategy that is relatively simple to implement is known as a squeeze strategy. Squeeze refers to the narrowing of the trading range and implies an impending breakout. 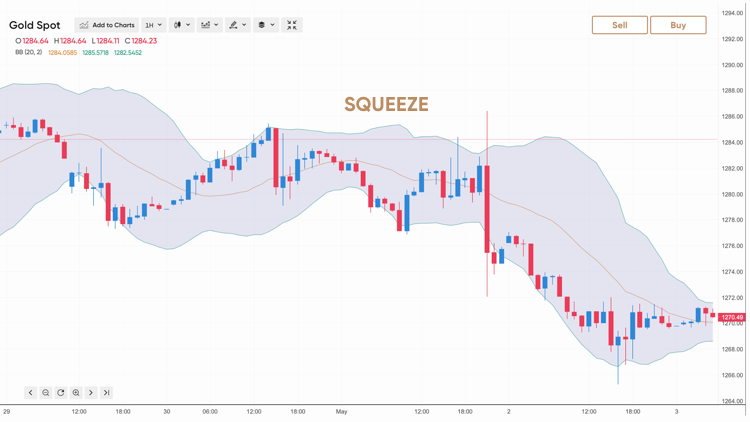 It happens when the price is moving aggressively and then suddenly starts shifting sideways in a tight consolidation. A trader can visually identify when the price of an asset is consolidating as the lower and upper bands get closer together on the chart. It means the volatility of the particular asset has decreased.

After a period of consolidation, the price usually tends to make a larger move in either direction, ideally on high volume. Expanding volume on a breakout is a sign that traders are betting with their money that the price will continue to move in the breakout direction. When the price breaks through the lower or upper band, the trader sells or buys the asset respectively. A stop-loss order is traditionally placed outside the consolidation on the opposite side of the breakout.