What is the exponential moving average (EMA) indicator?

Moving averages visualise the average price of a financial instrument over a specified period of time. There are a few types of moving averages that typically differ in the way that data points are weighted or given significance.

In fact, if you look at a chart with a simple moving average and exponential moving average, you might not be able to differentiate between the two at first glance. However there are several key distinctions.

The exponential moving average is a line on the price chart based on a mathematical formula to smooth out the price action. By putting more weight on the recent price and less weight to prices that occurred in the past, the EMA adapts more quickly to the latest price changes in price data than the SMA, which applies an equal weight to all observations in the period.

Although the calculation for the EMA indicator can look quite intimidating, the good news is that most trading platforms offer charts that do the job for you, so you can simply select the EMA from the indicator list and overlay it on the live stock chart.

You can also adjust how many periods it should calculate. Periods of 50, 100, and 200 are commonly used by traders who track price action back months or years. On the other hand, the 12- and 26-day EMAs have been largely popularised for a shorter time span.

The exponential moving average is a universal trading tool that works in all markets, including stocks, indices, currencies, commodities and cryptocurrencies. 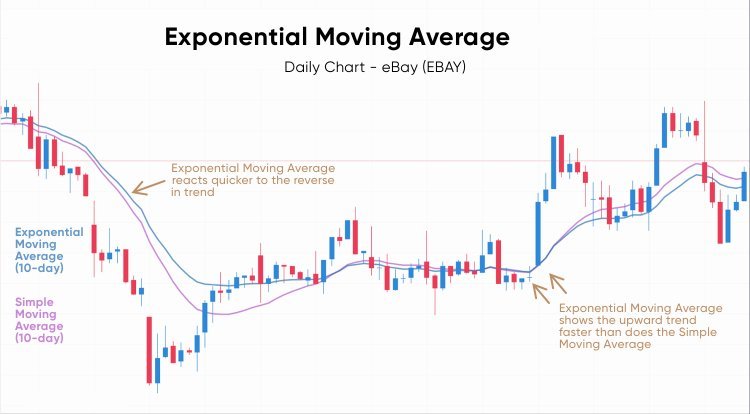 The first article to cover the concept of the EMA – “Forecasting Seasonals and Trends by Exponentially Weighted Moving Averages” by Charles C. Holt – was published in 1957. Providing a systematic development of the forecasting expressions for EWMAs, the method described in the book was used by various industries to examine trends and error structures.

In the early 1960s, the first person to use exponential smoothing for tracking stock prices was P. N. Haurlan, a technical manager for the JPL in Pasadena, USA, who had employed EMAs in designing the tracking systems for rockets. As he had access to a computer, he would analyse the stock market for fun during his downtime at work. Once successfully applied to the stock market, he did not call them “exponential moving averages”; instead, he referred to them as “trend values”. Haurlan later modelled the EMAs of his Haurlan Index. His work played a big part of the inspiration behind the development of the McClellan Oscillator and Summation Index, which involve exponential smoothing of Advance-Decline data.

Why are exponential moving averages useful for traders?

The exponential moving average indicator reduces the confusion of everyday price action and helps cut through the noise by reducing the lag in time data and avoiding distortions from information that may no longer be relevant. Additionally, it smooths the price and reveals the trend, showing the patterns you may have missed. The EMA is also quite reliable and accurate in forecasting future changes in the market price.

The EMA’s greater sensitivity can sometimes make it more vulnerable to false signals. However, it serves more good than bad. For traders who prefer trading fast-moving markets or intraday trends, the EMA is the perfect match. Sometimes, it is even used to determine a trading bias: if an EMA on a daily chart shows a strong upward trend, a day trader’s strategy may be to trade only from the long side on an intraday chart.
The important thing to notice is how much quicker the EMA responds to price reversals, whereas the SMA tends to lag. EMAs may also be more common in volatile markets for this same reason.

How to trade with exponential moving averages

Just like most other MA indicators, the EMA is more befitting for trending markets. If the market is in a steady and strong uptrend, the indicator line will also display an uptrend; the same works vice-versa for a downtrend.

Due to the lagging effect, by this point, the price action should have already reversed. Therefore, observing a consistent decline in the rate of change of the EMA could itself be used as an indicator that can further counter the dilemma caused by the lagging effect of moving averages.

The 12- and 26-day EMAs are the most popular for analysing short-term averages, meanwhile the 50- and 200-day EMAs are used as indicators for revealing long-term trends. The EMA indicator also serves as the underlying basis of the moving average convergence divergence (MACD) oscillator and the percentage price oscillator (PPO).

While you can experiment with the usage of the exponential moving average in many ways, professional traders prefer to keep EMA trading simple:

Trend following. You essentially use the EMA to track the primary trend and act upon it. If the stock doesn’t close beyond the average, you stay in the trade.

Moving average crosses. By using two different exponential moving average crosses, you can generate buy and sell signals. An EMA crossover indicates a change in momentum and trend. When a shorter-period EMA crosses over a longer-period EMA, it indicates a bullish signal; if the opposite, a bearish signal. In many cases, the price of an asset will retest the EMA line that is farther away after a successful EMA cross. Typically, the area between the two EMAs is a good place to enter a position in the direction of the trend.

The simplicity of moving average application and interpretation makes it possible to plot several different moving average lines on the chart at the same time, an advantage that many other technical indicators lack. Hence, EMAs are best to use in conjunction with other indicators to confirm significant market moves and to gauge their validity.

Trending articles
US dollar falls after Powell's dovish remarks: EUR/USD reclaims 1.04
by Piero Cingari
Projected Kenya interest rate in 5 years: Is there scope for rates to keep rising after 10-year highs?
by Fitri Wulandari
Shiba Inu price analysis: Is a rally about to start?
by Rakesh Upadhyay