Nickel price forecast: Will the metal continue to rise after 2022?

As 2022 comes to a close, nickel has emerged as the clear winner among base metals that have survived a volatile year.

After rising to multi-year highs in the first quarter as a result of Russia’s invasion of Ukraine, a global economic slowdown caused by central banks’ aggressive monetary tightening and the effects of Covid-19 lockdowns on China’s economy have wiped out gains for other industrial metals.

Copper, the economic health barometer, has fallen nearly 15% year-to-date (YTD), aluminium has lost 11.5% YTD, and tin has plunged 41% YTD. Nickel has increased by 29% since the beginning of 2022, despite falling from $100,000 per tonne during a short-squeeze in March.

However, as it has become clear that some major economies will enter a recession in 2023, as well as uncertainty surrounding China’s plan to end its ultra-strict ‘zero-Covid’ policy, demand for the metal used to make stainless steel may fall.

On the supply side, rising supply from Indonesia, the world’s top nickel producer, is poised to add downward pressure on the metals.

In the most recent nickel price news, the metal had been on a bull run which began in the final quarter of 2021, as seen on the nickel price chart below.

The LME nickel price chart showed that the metal started strongly at $20,700 a tonne in early January and continued its climb to $25,000 a tonne in the third week of February as tensions between Russia and Ukraine heated up. In addition, the drawdown on inventories did not show any signs of pausing, piling pressure on the already tight supply.

On 24 February 2022, the nickel price jumped to above $26,000 a tonne as Russian forces began their invasion of Ukraine. Prices then briefly dipped to the $25,000 a tonne level but in early March, the metal started its ascent as Russia ramped up its offensive on Ukraine and Western nations tightened sanctions.

Investors are concerned that nickel exports from Russia, the world’s fourth-largest nickel producer, will be the next target. Russia accounted for roughly 8.3% of the global nickel output of 2,427.4 thousand tonnes (kt) in 2021, according to GlobalData. 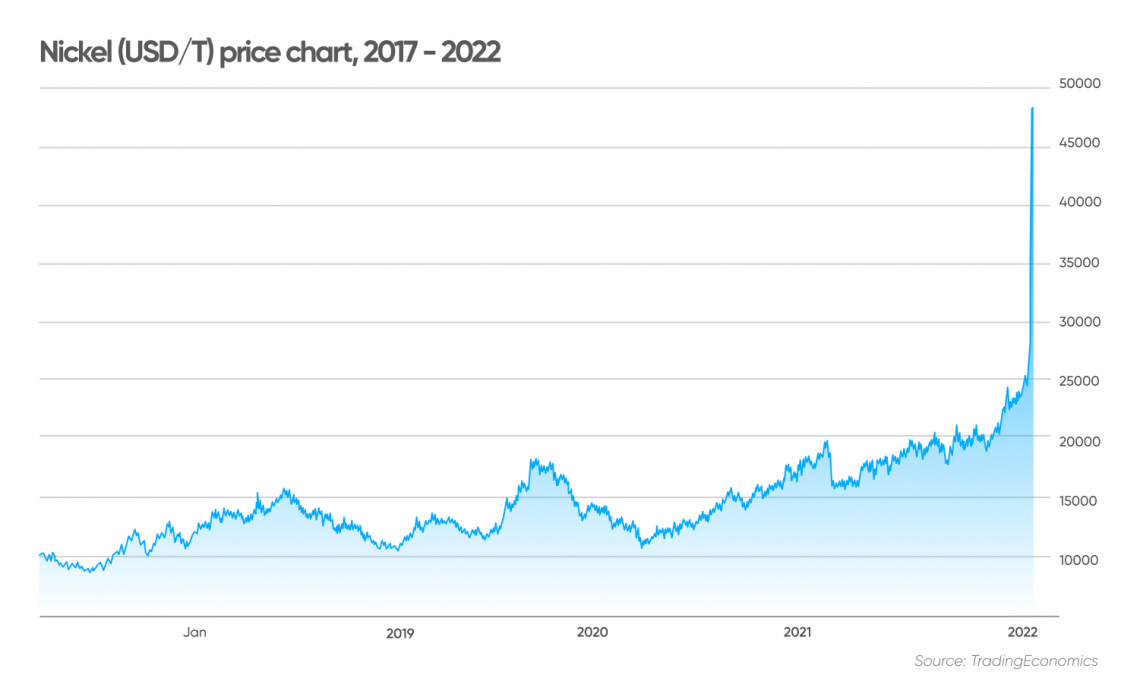 Historical nickel price data from the Institute Nickel Study Group (INSG) showed that the previous peak of $52,179 a tonne was achieved in May 2007.

The price of the metal began to drop after the 8 March rally as the US Federal Reserve kicked off its monetary tightening with its first rate hike since 2018. Also in March, China, the world’s largest nickel importer, faced a fresh Covid-19 outbreak which prompted the health authorities to put several cities into lockdown.

Nickel price volatility has increased as stocks at the LME’s warehouse dwindled. On 14 November, nickel briefly jumped by its 15% trading limit to hit nearly $31,000/tonne following an unconfirmed report about a blast in a small nickel smelter in Indonesia, Bloomberg reported.

“LME volumes have declined since then as many traders have reduced activity or cut their exposure due to a loss of confidence in the LME and its nickel contract after its handling of the March short squeeze,” ING Group’s commodity strategist Ewa Manthey wrote on 30 November.

“These low levels of liquidity have left nickel exposed to sharp price swings – even amid small shifts in supply and demand balances,” she added. 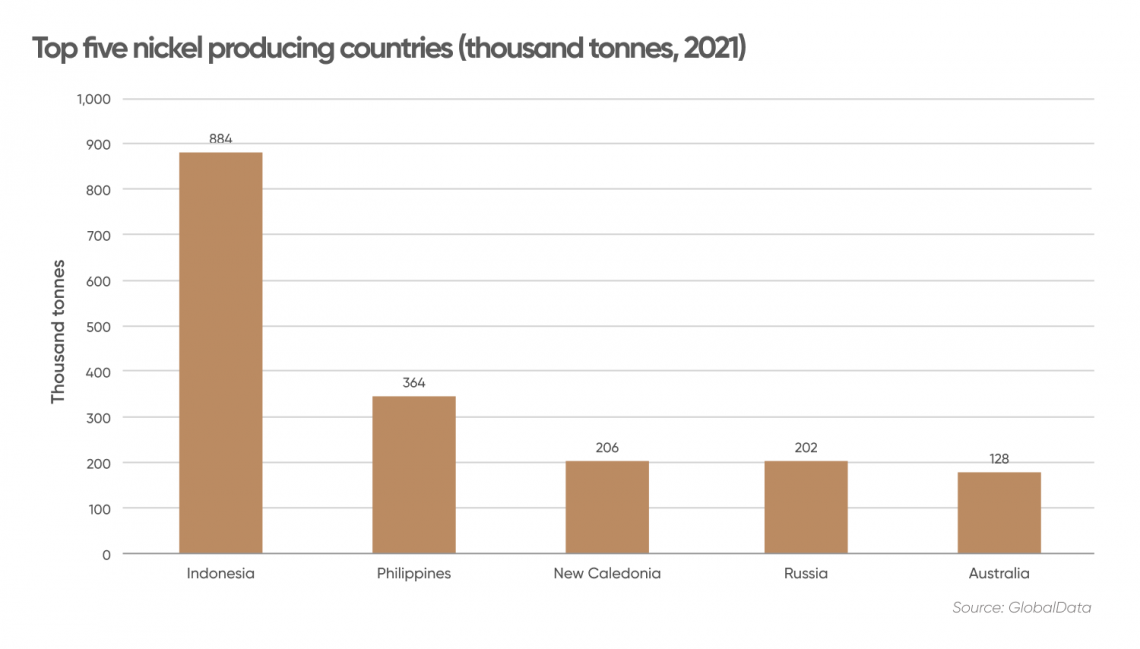 ING’s Manthey predicted that nickel prices would remain bearish in the short term due to a deteriorating macroeconomic picture and sustained market surplus. She predicted that continued weakness in demand from the stainless steel sector, which accounts for 70% of nickel consumption, would keep the global nickel market in surplus this year.

“Although demand from the battery sector is growing rapidly, making up around 5% of total demand at the moment, it isn’t enough to offset a slowdown in traditional sectors like construction. China’s strict zero-Covid policy has hurt the country’s construction sector and has weighed on demand for nickel,” Manthey said.

She added that China's new stimulus measures to support its property sector, as well as the relaxation of its Covid restrictions, raised hopes for increased demand for industrial metals.

In its Quarterly Metal Report on 4 November, Sucden Financial said that stainless steel production in China dropped by 590,000 tonnes in September, a 19.75% decline year-over-year (YoY). The country’s stainless steel output reached 24.78 million tonnes through to the end of September 2022, up 17.1% YoY.

“Demand from the stainless market has been strong and could rebound in 2023 as China’s economy grows, boosting stainless demand in autos and the property sectors; however, this is likely to be in Q2 2023,” Sucden Financial’s head of research Geordie Wilkes and research associate Daria Efanova wrote in the note.

Robust growth in Indonesia’s production was projected to contribute to the build-up of nickel surplus. The International Nickel Study Group in October forecasted the surplus in the market to grow to 171kt in 2023, from 144kt in 2022.

According to data from the US Geological Survey, as cited by ING, Indonesia was forecast to produce between 1.25 and 1.5 million tonnes of nickel in 2022, supplying more than 40% of the world’s mined production estimated at between 3 million to 3.2 million tonnes,

As demand was expected to soften due to headwinds from monetary tightening and risks of recession, what will be the nickel price forecast for 2022?

Trading Economics was bullish on nickel, expecting the metal to trade at $26,842 a tonne by the end of the fourth quarter, based on its global macro models and analysts’ expectations as of 1 December. In addition, the economic data provider estimated the metal to average $32,042 in 12 months’ time.

Analysts did not provide nickel future price predictions for 2025 to 2030.

The service did not offer a forecast beyond 2027.

“We have raised assumptions for 2023-2024 as inventories, while normalising, will remain below historical levels, while demand from stainless steel and EV increases. However, Indonesian supply additions will leave the market oversupplied, although fast-growing EV demand represents some upside,” Fitch Ratings said in its forecast.

“Our Global team anticipates that widespread sanctions on the Russian economy are likely to remain entrenched in coming years and that, even in the case of sanctions being lifted, Western firms would be very hesitant to re-engage fully with the Russian market. While nickel-producing firms have not been targeted directly by sanctions, the effect on investment will be substantial,” wrote Fitch Solutions in its 14 June long-term nickel forecast

According to Fitch Solutions’ nickel price forecast for 2030, the price was expected to fall to $21,000 from 2027 and steady at that level in 2031, on a substantial increase in refined nickel production from Indonesia.

When considering analysts’ commentary and algorithm-based nickel price projections, it’s important to note that predictions can be wrong. You should do your own research. Keep in mind that past performance is no guarantee of future returns, and never invest any money you cannot afford to lose.

Palladium price forecast: Will the market rebound in 2022?