HEX price prediction: What is HEX crypto? Could it be a scam?

By Peter Henn and Alejandro Arrieche

HEX, launched in December 2019 by Richard Schueler, aims to make certificates of deposit available on the blockchain. The HEX token hit an all-time high of $0.5561 on 16 November 2021.

Schueler, better known as Richard Heart, is a serial entrepreneur, author, YouTube personality, philanthropist and the founder of the PulseChain network, for which he raised more than $27m for medical research.

According to HEX’s official website, the project is designed to become the first certificate of deposit (CD) in the cryptocurrency world. In traditional banking, a CD is a product that yields a return slightly higher than the average savings account for the customer, after the customer agrees to lock up the invested funds for a fixed period.

A HEX CD works in the same way as in traditional banking, since it pays a return to investors who decide to lock up their HEX holdings for a set period, ranging from one day to several years.

HEX claims to follow a proof-of-wait (PoW) protocol that does not require the participation of miners. Instead, investors mint new coins by holding HEX during the agreed holding period. Once the holding period comes to an end, the HEX smart contract is designed to create new coins to pay off the holder, who then becomes a “miner” in this particular ecosystem.

HEX is a layer-2 (L2) application (an off-chain solution which helps to increase throughput on the main chain) built on top of the Ethereum network and powered by a smart contract that regulates how tokens are minted and distributed to investors.

At the moment, HEX offers an average annual percentage yield (APY) of 40%, depending on the length of the holding period. 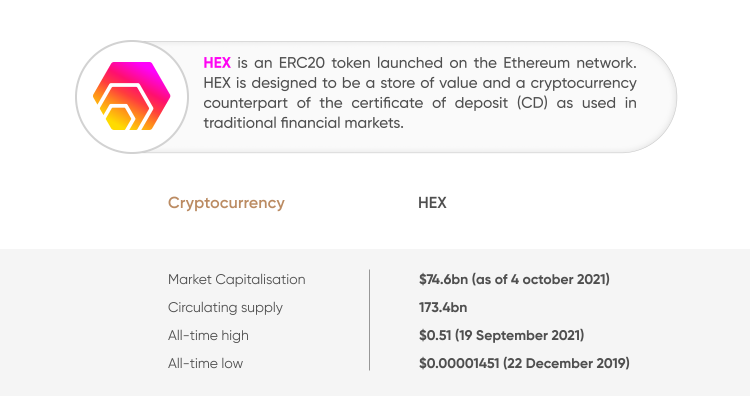 HEX tokens are minted to pay off existing holders when their lock-up period is due.

The project is structured so that as the price increases, the total number of HEX crypto that needs to be minted to pay off users will be lower. However, if the price suddenly collapses, token inflation will grow at an accelerated pace because more tokens will have to be created to pay the same amount.

In essence, the structure of the project guarantees that people will always be paid in HEX tokens, and since the price has gone up significantly in the past, new investors have piled on with the expectation of benefiting from the token’s elevated APY and a subsequent rise in its price.

Because HEX is based on the Ethereum (ETH) blockchain, it is a token, rather than a coin. You might see references to, for eample, a HEX coin price prediction, but these are wrong.

HEX cryptocurrency security audit: Is it safe to invest in HEX?

Since its inception in 2019, HEX has been surrounded by questions about whether the project is safe and whether or not it is a scam.

Doubters pointed to the HEX founder’s background. Heart allegedly participated in unlawful activities back in 2002, including a violation of US spam laws.

However, in December 2019, the HEX smart contract underwent a security audit by CoinFabrik. According to CoinFabrik’s report, no critical security issues were found.

CoinFabrik did reveal several minor problems, including “replay signature with modified parameters” and “excessive gas for computation”, which were addressed by the HEX team. The auditor confirmed that the HEX contracts in Solidity were “well written and properly documented”.

There are some risk factors to consider while evaluating the future expectations of HEX cryptocurrency:

According to Capital.com analyst Mikhail Karkhalev, the HEX project is a logical continuation of the development of the DeFi sector in the crypto market.

“The desire to get rid of the middleman in the form of the banking system is progressing,” he said. “Following the ability to make cross-border P2P [peer-to-peer] transactions and to take loans secured by cryptocurrencies, now we’ve got the possibility to open deposits (stake) at high interest rates without being involved in Ponzi schemes.

“This is indeed progress, and I would even say a revolution in the banking system. Unlike a bank, which offers slightly higher interest rates on time deposits than standard deposits that barely cover inflation, DeFi projects like HEX offer the opportunity to earn more without being an intermediary and profit-maker like a bank.”

Karkhalev said that “staking is one of the most profitable investments in the cryptocurrency market today.” However, he highlighted the necessity of considering the risks of “hacks, smart contract errors and exit scams”.

While past performance should never be taken as an indicator of future results, knowing HEX’s price history. can help give us some context if we want to either interpret a HEX price prediction, or else make one of our own.

While there was something of a downturn after that, HEX defied the market by growing throughout the summer, breaking through the $0.10 barrier in July and trending upwards to a high of a little over $0.48 on 18 September 2021. After that, another downturn was reversed when it hit an all-time high of $0.5561 on 16 November 2021, before it ultimately fell to close the year at $0.285.

So far, 2022 has been a pretty poor year for the overall crypto market. The HEX token, similarly, has shown a notable decline, with the nadir coming in a low of $0.02866 on 18 June.

Since then, there has been some slow, halting recovery, and on 21 November 2022 the token’s price stood at around $0.02868. At that time, there were just over 173 billion HEX in circulation out of a total supply of a little over 633.5 billion. This gave the token a market cap of around $4.9bn, making it the 202nd-largest crypto by that metric.

Let’s take a look at some of the HEX price predictions that were being made as of 21 November 2022, bearing in mind that price forecasts, especially for something as potentially volatile as cryptocurrency, are often wrong. Long-term crypto price predictions are often made using an algorithm, which means they can change at any time.

The HEX crypto price prediction from CaptainAltCoin suggested the token could be worth $0.0267 in December 2022, before recovering somewhat to $0.0406 in November 2023. The site then went on to make a HEX price prediction for 2025 that saw it potentially reach $0.0699. However, the downbeat assessment then came back, with the site suggesting the coin could have fallen into oblivion by 2027, becoming effectively worthless. Even by the time the site made a HEX price prediction for 2040, there was still no sign of a recovery, meaning that it thought HEX could be a dead coin.

When considering a HEX token price prediction, it is important to keep in mind that cryptocurrency markets remain extremely volatile, making it difficult to accurately predict what a coin or token’s price will be in a few hours, and even harder to give long-term estimates. As such, analysts and algorithm-based forecasters can and do get their predictions wrong.

Litecoin price analysis: Will it reach $100?