Silver has just dipped below the critical $20 level

Why has the silver price been falling lately?

Is the current silver recovery enough?

Who are the main silver miners affected?

What is the outlook for silver prices?

Why is the silver price down? Spot range flirting with the pivotal $20 mark

More than a year after the Reddit-fuelled silver short squeeze, dubbed “the world’s biggest short squeeze”, which pushed silver prices up to near 8-year highs, the metal is now trading near 2-year lows.

The precious metal has recently dipped below the psychologically important $20 per troy ounce level and was trading at around $19.2 per troy ounce, at the time of writing.

Not only that, but silver has also crashed about 28% since its March highs, seen at the beginning of the Russia-Ukraine conflict, when most precious metals had rallied, as well as about 36% since February 2021 highs. This has largely been due to an escalating US dollar (DXY) and central banks across the world determined to tighten monetary policy to combat decades-high inflation. 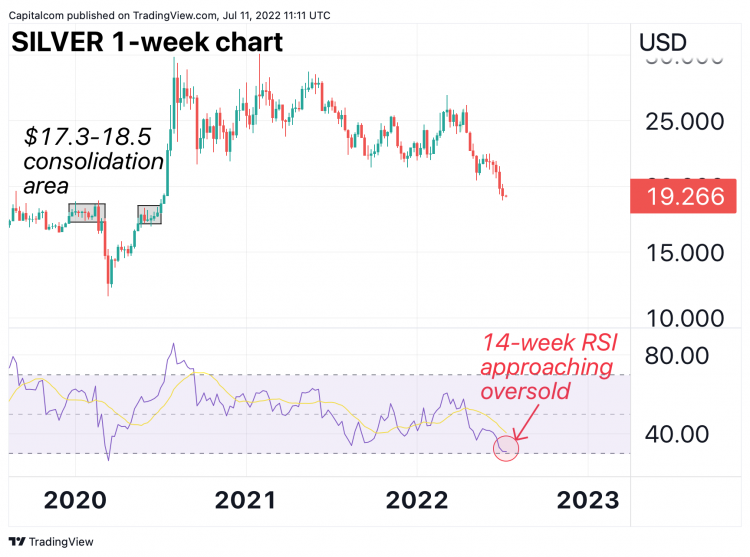 Silver has just dipped below the critical $20 level

According to Piero Cingari, analyst for Capital.com, "In contrast to gold, which thrives during periods of recession and stagflation, silver needs a global economic expansion in order to flourish, as it is more frequently employed in industrial production. Silver's major long-term catalyst is the progress toward green transition and growing EVs adoption, with the metal's widespread use in the photovoltaic sector as a key component in solar panels.

However, there have recently been setbacks on this front. China and India are boosting their imports of affordable oil and gas from Russia, filling the void left by Europe, which is struggling with a desperate hunt for energy alternatives and intends to buffer with a return to coal, delaying green transition efforts for the time being. Clearly, there might be incentives to make the changeover, but this will take time.

From a technical standpoint, we are getting close to the levels of $18-18.5 per ounce, which is where the grey metal traded before Covid-19 broke out in March 2020. This has historically been a zone of price consolidation, and it may now provide a potential support floor for silver. Therefore, it is still plausible that the price of silver may go down in the very near term; however, the metal is beginning to hit crucial oversold levels, which may create prospects for a price rebound."

What is your sentiment on POLY?

Give POLY a try

Why has the silver price been falling lately?

Silver has been tracking gold’s footsteps, which recently hit a 5-month low, due to a stronger US dollar (DXY) and rising interest rates by the US Federal Reserve. The US Fed has already raised interest rates by 0.75% in June, with an identical hike looking increasingly likely for July as well.

Furthermore, the US central bank has hinted heavily towards an additional 0.5% hike in September as well. This persistent monetary policy tightening has put precious metals under significant pressure in the last few weeks.

One of the main reasons silver is so hard-hit at the moment is because it is seen as both an industrial metal as well as a precious metal, so faces the downsides of both. Hence, as a precious metal, it is exposed to the impact of higher interest rates, as an inflation hedge, as well as bearing some of the brunt from gold. But as an industrial metal, it is also exposed to muted industrial and construction demand coming from top consumer China. Furthermore, it is also exposed to spillover from copper,which has just fallen below the crucial $3.5 per pound level and is a recession indicator.

Demand from the solar energy and photovoltaic industry is also considerably muted, as China is currently taking advantage of gas wars between Europe and Russia to purchase as much energy as possible from Russia, to plug in its own energy crisis. This has led to government investment in the solar and renewable energy industry to take a backseat for the time being, also leading to dampened silver prices.

According to a report by the London Bullion Market Association (LBMA), silver supply has recovered at a much faster rate than demand, with the biggest surge in supply coming from Latin America. This has largely been due to COVID-19 restrictions in countries such as Peru and Mexico, which are some of the major silver producers, being lifted much earlier than the rest of the world.

In 2021, silver production as a by-product from copper mining operations grew by about 9%, whereas primary silver output jumped by about 2%. However, silver demand, especially jewellery demand in top consumers India and China, dropped as in-store jewellery sales fell, due to a number of stores being closed after COVID-19 outbreaks.

Is the current silver recovery enough?

Silver has just soared almost 4%, to about $20.6 per troy ounce, at the time of writing. This was mostly led by the US Senate just announcing about $430 billion worth of investments/ A chunk of this amount, although not clear how much exactly, has already been earmarked for investments in green technology, which can slow down the rate of climate change. Solar energy, in which silver already plays a significant role, is expected to be a huge part of that. Silver spiked about 4% right after the announcement.

The Bank of England also recently raised interest rates by about 50 basis points, the biggest hike in 27 years, in order to curb soaring inflation, which it predicted would hit about 13.3% in October. However, the central bank also highlighted that it expects the UK economy to be in recession by this December, yet has no choice but to raise rates. This has caused renewed interest in safe haven assets such as precious metals, causing silver to spike as well.

However, better-than-expected US non-farm payroll data for July saw about 528,000 new jobs added, as opposed to the forecasts of about 250,000. This has led the US Federal Reserve to hint that it believes that the economy may not be in such dire state after all and could potentially withstand a few more interest rate hikes, to control inflation. With this in mind, the possibility of a 75 basis points hike in September is all the more likely, putting a cap on current silver gains.

The US Fed also claimed that the US economy was not really in recession, despite the technical definition of a recession being two quarters of negative GDP data. These claims could also significantly reduce silver's safe haven demand, if investors also believe that there is no cause to worry about recession. Additionally, silver is still facing double the downsides, as a result of it being both an industrial and precious metal. With China facing renewed lockdowns, industrial demand from there is considerably dampened as well.

Who are the main silver miners affected?

One of the most prominent Mexican silver miners, Industrias Penoles, has fallen by about 43% since its March 2022 highs, with earnings growth lagging behind other companies in the sector. Fitch Ratings has given the company a rating of “BBB”.

Polymetal International (POLY), another major silver miner, has also declined about 84% since February 2022. The company was first sanctioned by the UK and other countries as part of ongoing actions against Russia due to the Ukraine conflict, but is now also facing the brunt of falling silver prices. Currently, the company has a “hold” rating from Berenberg Bank.

Coeur Mining, with operations in Mexico, the United States and Canada has also recently fallen to a one-year low, dipping approximately 45% since April 2022. The company has also announced the sale of its Victoria Gold shares to Cormack Securities.

What is the outlook for silver prices?

China and India together account for approximately 40% of silver fabrication demand. While India’s COVID-19 situation has been improving somewhat over the last few months, China is dealing with a fresh wave of cases.

China is currently also dealing with soaring energy prices, which has caused a number of smelters and mills to shut down. As such the silver outlook for the rest of the year is looking pretty grim, with even lower silver demand, for the short to medium term.

According to the LBMA, this year could also see lower silver demand coming from industrial use, following increasing worries about stagflation, a scenario of reduced economic growth and increased inflation. This is likely to lead to reductions in sales of electronics and automobiles, which drive considerable silver industrial demand.

Mine production in Latin America especially, is expected to keep surging, with global mine output likely to inch up about 3% this year, mainly led by Mexico, Peru and China. This is likely to depress silver prices further, in the short term at least. However, declining supply from Kazakhstan, Russia and Australia are likely to put a floor on prices, stabilizing the silver outlook somewhat.

Silver is now hovering around the $20 per troy ounce range, having recouped some of its losses, but not very much. This has sparked off concerns of it dipping below $20 again in the near future.However, by the end of the year, according to ANZ analysts, silver prices could settle around $26 per troy ounce. Although a number of silver miners are also expected to cut production guidance due to rising energy prices and low demand, the second half of the year is expected to be better than the disappointing first quarter. The rise of the photovoltaic industry could also play a significant role in booting silver prices further.

Silver price analysis: Where to next for the metal?

Capital.com Why is the silver price falling? Sinks below the pivotal $20 mark