The performance of Tesla (TSLA) stock has been quite negative this year, shedding 65% of its value since the start of 2022.

Musk recently announced that Tesla would be delivering the first units of the commercial Semi articulated truck. Can this positive development be enough to trim some of this year’s losses in December? More importantly, what can be expected from Tesla stock in 5 years?

In this article, we explore further details about the electric vehicle (EV) manufacturer, along with predictions from analysts about the stock’s future.

Everything you need to know about Tesla

Tesla was founded in 2003 by Martin Eberhard and Marc Tarpenning, two engineers with a vision of revolutionising the auto industry by creating fully-functional, electric-powered vehicles.

The company was not, contrary to popular belief, founded by Musk. However, Musk was instrumental in Tesla’s success as he invested a sizeable amount of money in the company and helped to raise funds from venture capitalists and angel investors.

The first vehicle launched by Tesla was the Roadster, in 2008. It then introduced new models, including the Model S, Model X, Model Y and Model 3. The Tesla Semi followed, together with a pick-up truck called the Cybertruck and a new Roadster model.

Tesla is headquartered in Austin, Texas. The company has manufacturing facilities in the US (Texas, Nevada, California, and Buffalo), China and Germany.

Understanding the company’s history and current situation is a good first step in the process of drafting a plausible Tesla long-term forecast. 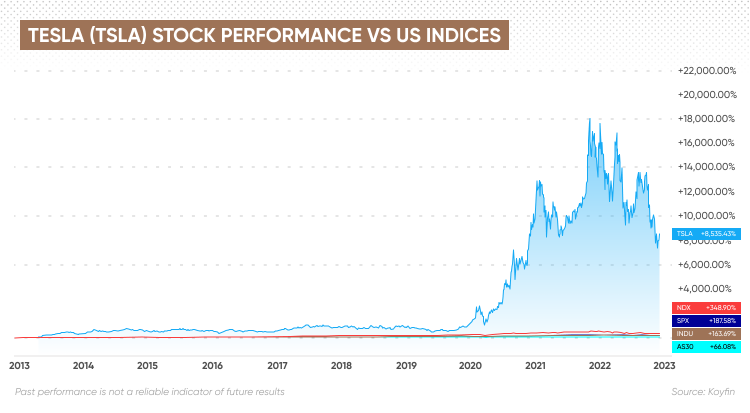 This means that the company’s share value has grown at a compounded annual growth rate of 56.8% – an impressive return that hasn’t necessarily come without hiccups along the way. 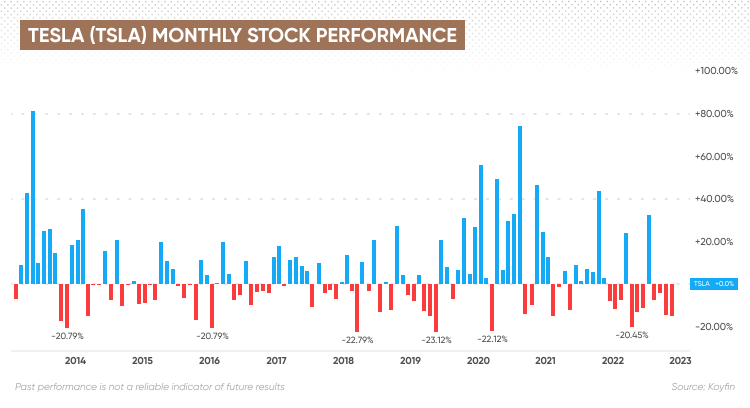 The chart above shows that in six months within the past 10 years, TSLA has experienced monthly drawdowns of more than 20%. This shows how volatile the stock has been and what it took from investors who adopted a buy-and-hold approach to stay the course to see the value of their holdings increase by the percentages described above.

Tesla hit all-time highs (post-splits) in November 2021 at $414.50 a share, but changes in the macroeconomic backdrop led to a significant decline in its stock value after that, as investors adopted a risk-off attitude due to the US Federal Reserve’s increasingly hawkish actions.

Investors must be aware that past results are not a guarantee of future performance, which means they should not base their Tesla stock predictions on what its price has done in the past.

Price drivers to consider for a Tesla stock 5-year forecast

What kind of variables can investors look at to determine where the price of Tesla stock in 5 years may land?

The company’s fundamentals are perhaps the first thing to consider when drafting a Tesla stock 5-year forecast. This includes an analysis of the demand for EVs in multiple corners of the world – primarily in the locations where Tesla is already offering its products, but also in markets the company may be planning to reach soon.

Additionally, investors should also look at the competition and what they are doing to see if their vehicles may eventually eat up a portion of Tesla’s pie. According to data from S&P Global, Tesla’s vehicles accounted for 65% of the sales in units of electric cars in the US in the first nine months of 2022.

However, Tesla is also looking to become a major player in other parts of the world such as China and Europe. They will have to compete with firms like Nissan, Ford, General Motors, VW, Toyota, Nio and Xpeng to either become the leaders or stay at the top of the EV market in these areas.

By analysing these elements, investors may be able to determine how much Tesla could bring in sales, cash flows and earnings in the next 5 years to possibly value the business by using price-to-earnings ratios and other similar techniques.

Other variables that could shape the Tesla stock price in 5 years include macroeconomic factors such as interest rates, as higher rates will typically lead to lower equity valuations. In addition, higher rates may also depress the demand for vehicles, as borrowing costs will tend to increase.

Tesla stock in 5 Years: Will it go up or down?

As of 21 December, MarketBeat had the consensus recommendation from analysts for Tesla stock stood at ‘hold’, with 18 out of 35 analysts rating the stock a buy, 12 rating it a hold and five a sell.

Analysts have been monitoring what Musk has done with his Tesla shares lately as part of the financing required to take over Twitter. The stock sales performed by Musk may have depressed the price of Tesla to the extent that the company may be temporarily trading below its intrinsic value.

In this regard, analyst Seth Goldstein from Morningstar commented: “On 14 December after the market close, Tesla SEC filings revealed that CEO Elon Musk sold nearly 22 million shares from 12 December through 14 December. The shares sold were worth $3.58bn, and the proceeds will probably be used to supply additional funds to Twitter, which Musk acquired in late October.”

As for the long-term outlook for Tesla stock, the third-party forecasting service Wallet Investor has estimated a Tesla 5-year forecast of $564.24 a share.

Both of these estimations indicate a sizeable upside potential for TSLA within the next five years, if those targets are hit. However, many things can happen during that period. Therefore, these forecasts should not be considered a recommendation to invest in Tesla stock.

Investors should always perform their own due diligence on any company before buying shares. And never invest money you cannot afford to lose.

Top 10 retail stocks: Which stocks are due to have the most wonderful time of the year?

TSLA 162.39
Trade
+1.850%
BBBY 2.59
Trade
+4.960%
AMZN 99.49
Trade
+0.690%
AAPL 143.49
Trade
-0.010%
NVDA 195.16
Trade
+0.580%
The difference between trading assets and CFDs
The main difference between CFD trading and trading assets, such as commodities and stocks, is that you don’t own the underlying asset when you trade on a CFD.
You can still benefit if the market moves in your favour, or make a loss if it moves against you. However, with traditional trading you enter a contract to exchange the legal ownership of the individual shares or the commodities for money, and you own this until you sell it again.
CFDs are leveraged products, which means that you only need to deposit a percentage of the full value of the CFD trade in order to open a position. But with traditional trading, you buy the assets for the full amount. In the UK, there is no stamp duty on CFD trading, but there is when you buy stocks, for example.
CFDs attract overnight costs to hold the trades (unless you use 1-1 leverage), which makes them more suited to short-term trading opportunities. Stocks and commodities are more normally bought and held for longer. You might also pay a broker commission or fees when buying and selling assets direct and you’d need somewhere to store them safely.
Capital Com is an execution-only service provider. The material provided on this website is for information purposes only and should not be understood as an investment advice. Any opinion that may be provided on this page does not constitute a recommendation by Capital Com or its agents. We do not make any representations or warranty on the accuracy or completeness of the information that is provided on this page. If you rely on the information on this page then you do so entirely on your own risk.