By Nicole Willing and Peter Henn

It is a crypto that provided some excitement when it came onto the market at the end of 2021, but what is tectonic (TONIC)? Let’s see if we can find out anything, and also take a look at some of the tectonic price predictions that were doing the rounds as of 2 September 2022.

Among the newest cryptocurrency projects, the Tectonic mainnet launched on 23 December 2021. The protocol aims to provide cross-chain decentralised money market services, offering users the ability to earn passive income on their funds or borrow money against their assets instantly. Savers’ deposits provide the liquidity for lending to borrowers at variable interest rates. Tectonic’s smart contract algorithm determines interest rates based on supply and demand for assets.

Depositors can generate passive yield with no lockup period to withdraw earnings.

“Residing along the crusts of two crypto supercontinents, Tectonic will be a cross-chain money market at the heart of Cosmos and Ethereum, empowering users to earn passive yields on their Cosmos and Ethereum-based assets, and to get access to instant crypto-backed loans,” notes the Tectonic blog.

“While DeFi money markets on Ethereum have managed to achieve massive traction, the network has been constantly constrained by high levels of congestion which results in extremely high network fees and slow transaction speeds. The democratisation of finance requires a network that can handle high scale at low cost. Cronos’ average gas fee is estimated to be less than $0.1 for simple transactions, while the network itself can handle more than thousands of transactions per block.”

It added: “Interoperability will be at the core of Tectonic. Apart from having Ethereum (ETH)-based assets on Tectonic, Cronos, being IBC enabled, will allow us to facilitate the lending and borrowing of any Cosmos (ATOM)-based assets. This enables us to fulfil our vision of being the cross-chain money market between [ethereum virtual machine] EVM chains and the Cosmos ecosystem.”

Tectonic is a decentralised finance (DeFi) protocol on the Cronos blockchain, aiming to facilitate lending and borrowing across different blockchains. Cronos uses inter blockchain communication (IBC) to enable interoperability between the Ethereum and Cosmos blockchain ecosystems.

TONIC is the protocol’s native cryptocurrency token. It’s used for participating in governance and staking into the Community Insurance Pool to earn rewards in exchange for securing the protocol.

Tectonic was created by Particle B, a blockchain-based “incubator”, founded by former Crypto.com CTO Gary Or.

It is important to note that, because TONIC is based on the Cronos blockchain it is, technically speaking, a token, rather than a coin. You might see references to such things as the TONIC coin or a tectonic coin price prediction, but these are not strictly correct.

The token was distributed as follows:

One of the biggest bits of tectonic news came on 11 March 2022, when token staking went live. This enables holders to deposit their tokens into the staking module in return for yield, including a share of the revenue generated from the fees that borrowers pay for their loans. Staking is a separate feature from the TONIC money market. TONIC holders that were included in a wallet snapshot in January were eligible for an airdrop of tokens that they could also add to the staking pool.

To celebrate this milestone, we will be distributing the long-awaited $TONIC airdrop.

The $TONIC airdrop will soon be distributed to all users who are eligible as stated in our requirements post.https://t.co/n3Eq8hVdVh

TONIC stakers receive xTONIC as a reward. The exchange rate will rise over time as “the protocol will direct 50% of all protocol revenue (from liquidation fees and loan repayment fees) into the staking module contract, which will be converted programmatically by smart contracts into TONIC via other decentralised exchanges, such as VVS Finance”.

The tectonic crypto market exchange rate between TONIC and xTONIC is based on the amount of xTONIC minted compared with the amount of TONIC in circulation. As more users take out and repay loans, the staking module will purchase more TONIC from the market, reducing the token supply and pushing up the price.

Stakers will be able to withdraw their tokens from the staking module at any time, although they will have to wait 10 days to receive their funds.

Tectonic also plans to launch an insurance fund that will collect 10% of the interest borrowers pay to be used in the event that undercollateralised loans are not paid. 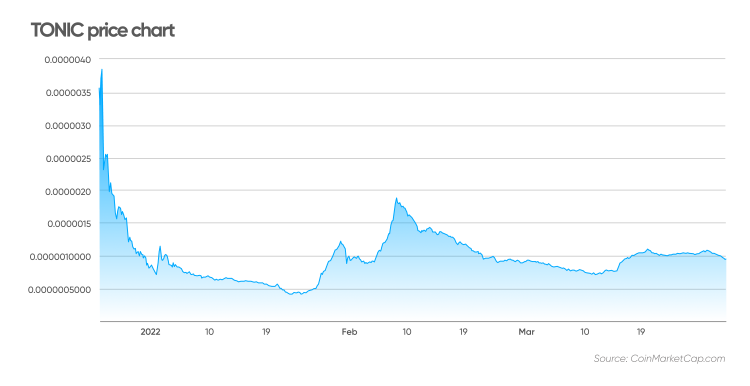 Now, let's take a look at the TONIC price history. While past perormance should never be taken as an indicator of future results, knowing what the token has done in the past can help give us some much-needed context when it comes to either making or interpreting a tectonic price prediction.

Since then, the token has made something of a recovery, and was trading at around $0.000000124 on 2 September 2022. At that time, there were a self-reported 90.82 trillion TONIC in circulation out of a total supply of 500 trillion. If this figure were accurate, at the time of writing it would give TONIC a market cap of around $11.247m – making it something like the 730th largest crypto by that metric, according to data on CoinMarketCap.

Let’s now take a look at some of the tectonic price predictions that were being made on 2 September 2022.

Gov Capital was incredibly bearish in its TONIC price prediction. Its algorithm, based on deep learning, projected that the cryptocurrency could have declined to a level that made it a de facto dead coin as soon as 1 October 2022, with the forecast for 2 September 2023 coming in at $0.

When considering a TONIC token price prediction, it’s important to keep in mind that cryptocurrency markets remain extremely volatile, making it difficult to accurately predict what a coin or token’s price will be in a few hours, and even harder to give long-term estimates. As such, analysts and algorithm-based forecasters can and do get their predictions wrong.

What is Lucky Block? What you need to know about LBLOCK decentralised lottery project tokens

How many binance coins are there? Your guide to BNB

Ethereum 2.0 price prediction: Can ETH surge after The Merge?

Ethereum price prediction: What happens after The Merge?