Federal Reserve is still way behind the curve

A market crash is unfolding: Will it affect the dollar, stocks or bonds?

Gold in focus: Will the yellow metal’s value skyrocket?

The value of gold could rise tenfold and hit $20,000 (£15,170) per ounce in the event of a collapse of confidence in the US dollar and runaway inflation, according to Peter Schiff, CEO and chief economist of brokerage firm Euro Pacific Capital.

Peter Schiff recently took part in an exclusive Capital.com debate with Australian and post-Keynesian economist Steve Keen, in which the two experts discussed the possible effects of a market crash.

What could trigger a loss of confidence in the dollar is the Federal Reserve’s inability to tame inflation through late and timid interest rate hikes, Schiff explained.

“There’s no way these tiny rate hikes are going to do anything to bend the inflation curve. The Fed is going to continue to get further and further behind the curve,” Schiff said.

As seen in the chart below, the data demonstrates that the difference between interest rates and inflation – the so-called real interest rate – in the United States is at its all-time low.

Federal Reserve is still way behind the curve 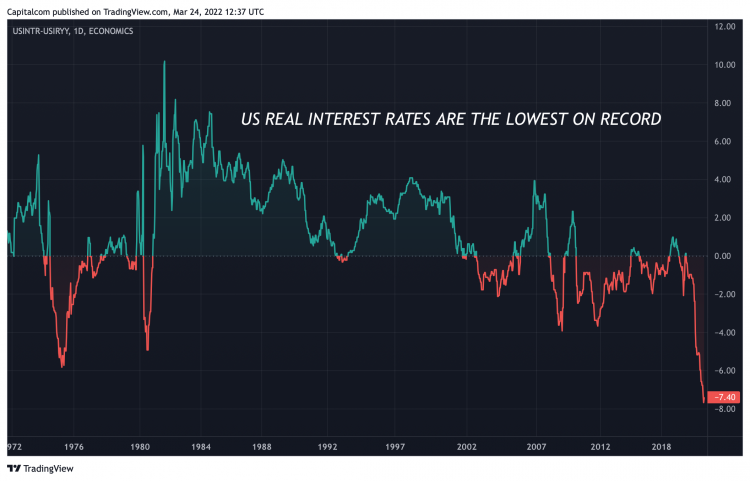 A market crash is unfolding: Will it affect the dollar, stocks or bonds?

Peter Schiff says that at some point, markets will have to accept the truth that inflation is either going to grow much worse or the Fed will have to be significantly more active in its battle against it.

The ultimate outcome of this plot can only be a new market crash, which might target the dollar or the bond market, if inflation escapes the Federal Reserve’s grasp, or the stock market if the Fed reacts aggressively with interest rate increases.

“I think 2021 represented the actual peak of the speculative wave, similar to 2000 being the peak of the dotcom bubble. You’re going to see a big multi-year bear market in very speculative companies that don’t really earn any profits that just trade off as some multiple of revenue without regard to losses.” – Peter Schiff, CEO and chief global strategist at Euro Pacific Capital

Gold in focus: Will the yellow metal’s value skyrocket?

Throughout history, the dollar’s value has steadily declined in relation to gold. An ounce of gold cost $20 in the 1920s, but now it costs almost $2,000.

Since the end of the Bretton Woods system in 1971, the greenback’s value has been completely determined by faith, since it is no longer tied to real gold reserves.

This implies that there is no longer a limit on the prospect of the Federal Reserve ‘printing’ the dollar, and hence no floor below which the actual value of the dollar may fall anymore.

“I do expect the dollar to lose a considerable percentage of its value relative to gold way more than 50%. I would say on the magnitude of 70 – 90% of the dollar’s purchasing power is going to be lost. So if the dollar were to lose 90% of its purchasing power, the price of gold would go up tenfold, which would put it at $20,000 an ounce.” — Peter Schiff, CEO and chief global strategist at Euro Pacific Capital 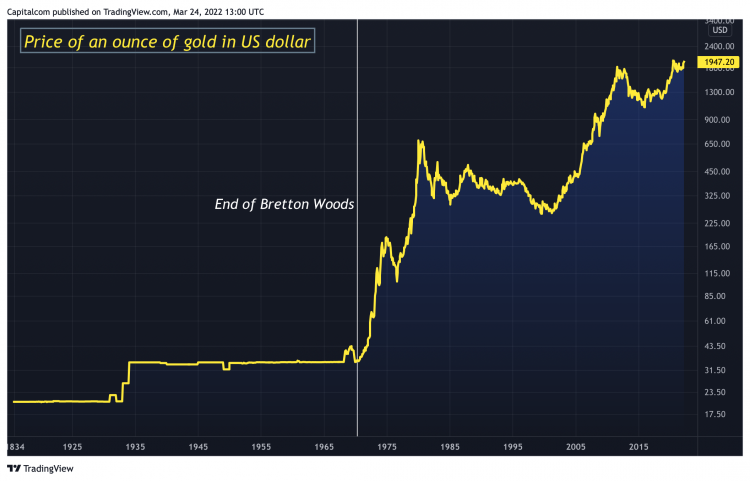 Historical price of an ounce of gold since 1830 – Credit: Capital.com / Source: TradingView

Is silver a buy after a technical golden cross?

Capital.com Schiff sees gold at $20,000 in a dollar crash