News and Analysis News Cryptocurrencies Who owns the most Ripple? XRP insiders among biggest stakeholders
Menu

What is Ripple (XRP)?

Who owns the most Ripple (XRP)?

The road ahead for Ripple (XRP)

Who owns the most Ripple? XRP insiders among biggest stakeholders

In 2012, Ripple Labs (XRP) emerged as a key player in the fintech industry, promising banks faster and cheaper international money transactions. The company accomplished this by developing the RippleNet network, which allows XRP cryptocurrency transactions to be finalised and cleared instantly.

In 2020, the US Securities and Exchange Commission (SEC) launched a lawsuit against Ripple Labs and its current and former chief executive officers. Allegations that the firm had raised over $1.3bn in illegal unregistered digital asset securities issuance were at the heart of the controversy.

Since XRP coins were used to fund Ripple's network, which allows money transfers for merchants, a legal action was initiated towards the end of 2020. The SEC's decision to file a lawsuit against Ripple and its executives for violations of securities law has impacted the value of XRP, inflicting financial harm to its  holders.

The SEC and Ripple case has reached a grinding deadlock as both parties battle to uphold their positions. Ripple Legal has filed a petition to counter the SEC in which they criticised the SEC's allegedly unethical tactics.

Ripple's lawyer, John Deaton, recently tweeted that over 70,000 of those who own XRP have joined John Deaton's class action complaint against the SEC.  Among those holders, who owns the most ripple and how much of the token do the whales control?  Here we take a look at the XRP circulating supply and ownership concentration.

What is Ripple (XRP)?

Ripple (XRP) is an international money transfer system that operates on blockchain technology. It works with hundreds of financial institutions, including the Bank of America (BAC), which uses its technology.  XRP's transaction costs are $0.0002 per transaction, and the network is relatively quick.

With its ability to swiftly verify that a transaction has been completed, Ripple acts as a reliable third party among its users. Exchanges between fiat currencies, cryptocurrencies like Bitcoin (BTC), and commodities like gold could all be facilitated through Ripple.

Ripple is often misunderstood as a cryptocurrency. There is a native coin on the Ripple network called XRP, but Ripple itself is not a cryptocurrency. Institutions can instantly send and receive funds in their native currency on either end of a cross-border transfer utilising XRP as a bridge token. XRP can be used by:

The XRP Ledger is a blockchain that processes 1,500 transactions a second. It’s  61,000 times more energy efficient than proof-of-work (PoW) blockchains and is supported by a decentralised network of 150+ validators all over the world.

What is your sentiment on XRP/USD?

Give XRP/USD a try

Ripple features a hard cap, which limits the total amount of XRP coins that can be mined. CoinMarketCap estimates the maximum supply of XRP at 100 billion.

Ripple locked a certain sum of XRP into escrow accounts, to be released at predetermined intervals upon the issuance of XRP, starting with 55% of the supply. Although Ripple launched with 55 billion XRP, one billion XRP are currently issued each month.

Unused quantities of the one billion XRP distributed each month are returned to escrow and re-released in the first month without fresh XRP releases.

Moreover, XRP has a deflationary characteristic. At the time of writing, the total supply of XRP has decreased to 99.99 billion from its initial level of 100 billion. To avoid spam assaults, the XRP Ledger charges a nominal cost for each transaction. This fee is burned during the transaction, resulting in deflationary supply.

The minimum transaction cost for XRP is 0.00001 XRP. Certain transactions, such as those requiring multiple signatures or escrow, incur higher costs. As of 12 August, the circulating supply of XRP was 49.13 billion, indicating that roughly half of the tokens are already in circulation.

Who owns the most Ripple (XRP)?

According to CoinCarp data, there were more than 226,458 ripple holders, as of 12 August, up from 223,553 on 14 July. A more detailed analysis showed that the top 10 ripple holders controlled more than 73% of the XRP supply.

The cryptocurrency exchange platform Binance was the top holder of ripple, with more than 36% of the supply amounting to 100,897,936 XRP tokens, indicating that retail investors have considerable influence over XRP currency.

According to Forbes, Chris Larsen, Ripple's co-founder and previous CEO until November 2016, held more than 5.1 billion XRP in addition to a 17% stake in the company.

Brad Garlinghouse, the current CEO of Ripple, also owned a significant amount of XRP. However, Forbes did not specify how much. Garlinghouse also held 6.3% of Ripple's stock.

An anonymous wallet, who owned 36,700,000 XRP tokens, had the second-largest holding accounting for over 13% of the entire supply, according to CoinCarp data. Given Larsen’s and Garlinghouse’s previous stakes in the cryptocurrency, they could be amongst those who own the most XRP. But there is no evidence they are.

There was no data available on who the other prominent XRP millionaires or Ripple billionaires were. However, since a single individual may hold many anonymous addresses, this data cannot be used to speculate who owns the most Ripple.

The road ahead for Ripple (XRP)

Ripple (XRP) has seen no substantial price change over the years due to the ongoing lawsuit. It last achieved a high of $3.84 in January 2018, according to CoinmarketCap. At the time of writing (12 August), XRP was trading at $0.3765 and had a market capitalisation of $18.54bn, making it the 6th largest crypto. 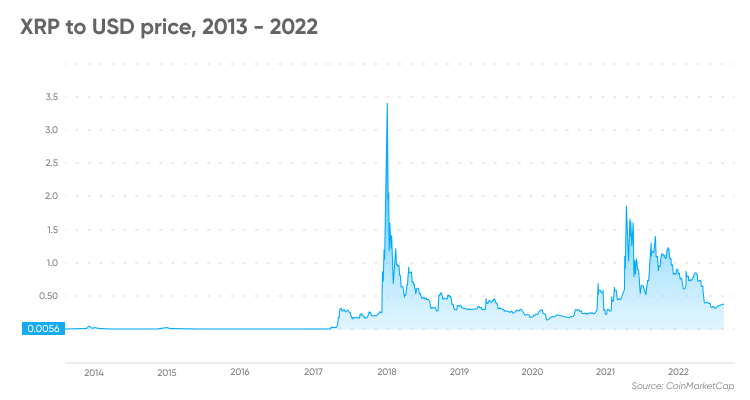 According to the Ripple second-quarter report, it was a record quarter for on-demand liquidity (ODL), with volume increasing by more than nine times year-on-year. Users continued utilising ODL for things beyond typical transfers or individual transactions, with treasury flows and bulk payments accounting for increased network traffic.

Furthermore, Ripple is still actively seeking new opportunities in the cryptocurrency ecosystem. It has announced collaborations with prominent businesses Lotus Automotive and Balmain to launch non-fungible tokens (NFTs) on the XRP Ledger.

The firm also collaborated with FLUF World to create the Root network, which will be connected with XRPL and charge gas prices in XRP.

Meanwhile, Ripple and the defendants in the landmark litigation against the US SEC are stuck in a deadlock.

Attorney Jame Filan tweeted that the SEC had filed a one-line statement to the court. He also mentioned in another tweet that the SEC's answer is a misuse of the judicial process and a waste of the court's time, as illustrated by the SEC's five-day delay in filing a one-sentence response in which the SEC denied Ripple's initial request.

#XRPCommunity #SECGov v. #Ripple #XRP The SEC has filed a one line response to the Ripple Defendants efforts to enforce Judge Netburn’s ruling on authentication of videos of SEC officials’ remarks. The SEC says it takes no position on Ripple’s request to reopen fact discovery. pic.twitter.com/AXU0XDYhSi

Ripple is a deflationary coin that has a limited supply and high concentration of whale ownership, yet the majority of the coin are held by retail investors through the Binance cryptocurrency platform.

No matter who has the most ripple, cryptocurrency markets remain volatile and the whale ownership data shouldn’t be used as a substitute for your own research. Always conduct your own due diligence before trading, looking into the latest news, technical and fundamental analysis and analyst commentary.

Remember, past performance does not guarantee future returns. And never trade money you cannot afford to lose.

Ripple Effect: Thousands of people enter the fray against SEC

Capital.com Who Owns The Most Ripple? | XRP Holders