Winter is coming but this time Europe has filled up its gas storage to warm up the coming cold months.

The Japan-Korea Marker (JKM) – the benchmark price for spot LNG cargoes delivered into Japan, Korea, Taiwan, and China – has also fallen about 58% from its late August peak of nearly $70 per million British thermal units (MMBtu).

The one-month ahead Henry Hub natural gas futures traded on the New York Mercantile Exchange (NYMEX) has also fallen to around $4/MMBtu from $9 in September.

However, the prolonged curb of Russian gas supply and expectations that weather could turn colder than expected serve as the upside on prices. Will natural gas prices rebound in winter?

Read this article for the recent natural gas trend developments and the latest natural gas price predictions from analysts.

Natural gas prices in Europe have been hitting record highs since last year, even before Russia’s invasion of Ukraine. Reduced Russian gas supply and rising energy demand with the reopening of economies after the Covid-19 pandemic, combined with a weak performance by renewables, sent Dutch TTF soaring.

The benchmark briefly touched an all-time high of €345/MWh on 7 March after Russia attacked Ukraine on 24 February, before gradually retreated to below  €110/MWh, per ICE’s price chart .

From the second week of March to mid-June, the European gas price was steady in a range of €88/MWh to €110/Mwh despite Gazprom starting to cut supplies to several European countries such as Poland, Bulgaria and The Netherlands.

After touching a fresh high of €346.52 on 26 August, European natural gas prices gradually dropped below €220. Fears of supply shortages for the winter eased after Germany met its October target of filling its gas storage capacity to 80%-85% earlier than expected.

Germany’s official data indicates that as of 10 November, the country’s gas storage was 99.95% full.

“A raft of LNG tankers offshore, waiting to unload and natural gas storage across the continent at 95% of capacity had helped push prices lower since August,” Fitch Solutions’ analysts wrote in a note on 3 November.

“This trend was further reinforced by unseasonable warm temperatures which has delayed the start of traditional heating season by weeks further buoying supplies through weak consumption.”

US and Asia gas prices had also come off from their highs as Europe's subdued demand weighed on prices.

US natural gas price has eased to $4 as of 8 November, from a 14-year high of $9.85/MMBtu on 29 August, data from the US Energy Information Administration (EIA) showed. 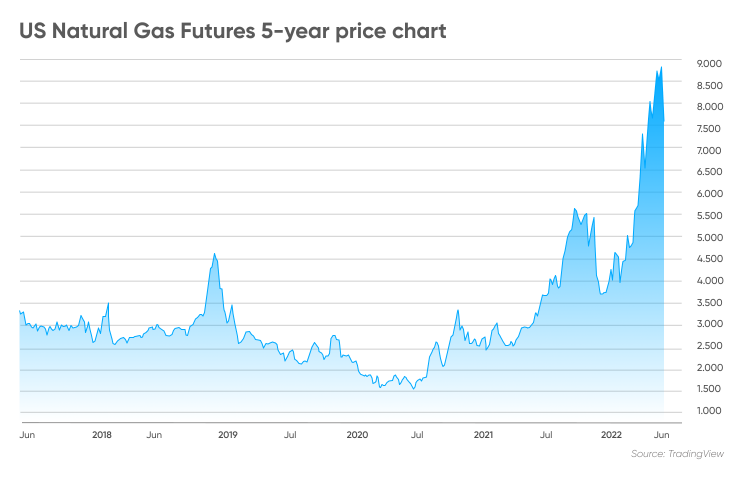 Despite sitting on a full tank of storage, the gas situation in Europe has remained very precarious, according to analysts at Bank of America (BofA) Global Research on 30 September.

“A one standard deviation colder-than-normal winter would leave stocks near empty, on our estimates. A synchronous cold winter in Europe and Asia would trigger a race for gas molecules. Given the drop in nuclear and hydro power generation and the collapse in European natural gas demand elasticity, Europe will keep relying on fuel switching abroad and demand rationing at home to balance TTF,” wrote BofA’s analysts.

Given the recent sabotage of Nord Stream, BofA analysts stated that restocking the storage in 2023 would be even more difficult should the conflict in Ukraine intensify.

“If these pipes are permanently lost, Europe will need to move decisively to address its structural supply gap,” they said.

Fitch Solutions’ analysts said that gas consumption was expected to increase in coming weeks as temperatures were going towards seasonal averages. As consumption rises, stock levels should gradually decline, opening up space for offshore LNG to be re-gasified and sent into storage.

“This should support a renewed uptick in prices in the coming weeks as curbs to Russian natural gas flow will keep the fundamental outlook tight and any severe temperature or weather events could add to already elevated volatility,” Fitch Solutions analysts wrote.

Natural gas price forecast 2022 and beyond

Due to price volatility in the energy market, no analyst provided a long-term natural gas price forecast for 2030.

When looking at natural gas predictions, keep in mind that analysts can be wrong. Forecasts shouldn’t be used as a substitute for your own research. Always conduct your own due diligence before investing and never invest or trade money you cannot afford to lose.