The social media influencer with over 20 million followers on her social media accounts first introduced the NFT project dubbed ‘CryptoSis’ in November 2021.

CryptoSis is a collection of 6,069 cartoon illustrations of Lana on OpenSea, the biggest NFT marketplace. The project was pitched as an 'NFT franchise' with more influencers joining in the future.

Rhoades promoted the project heavily on her social media. She also made a point of her long-term commitment to the project. In a question and answer, hosted on her Instagram, Rhoades said before the launch: “This is not a one-time thing, we have other models signed to create their own CryptoSis NFT collections next. The brand + value of CryptoSis NFT's make it a lucrative investment for holders that they can sell for more than they paid to mint.”

“My #1 goal for the project is to increase the value of @cryptosisnft’s investment for holders that they can sell for more than they paid to mint.” 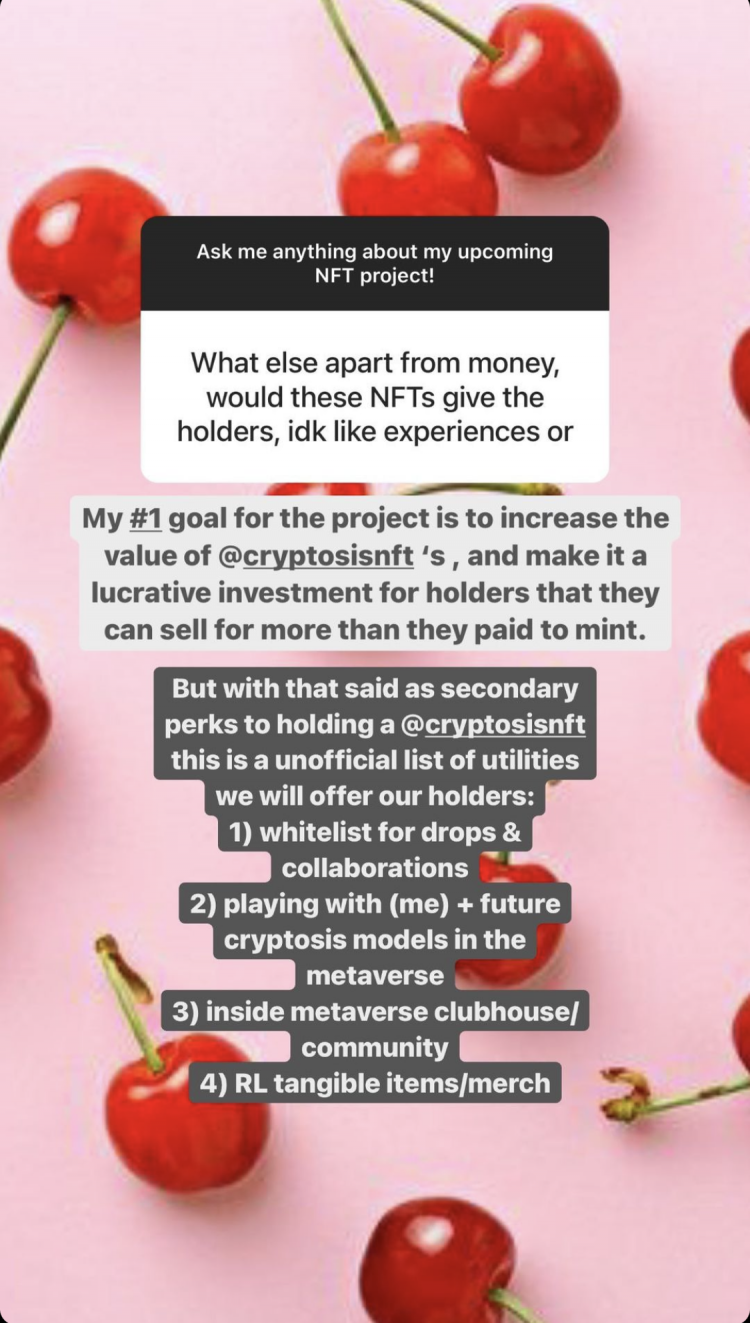 “We have tons of preparation for after-market marketing to help raise the floor price and profit all our members. We are working for an instant 2x - 5x,” she wrote of the possible value of the NFTs following the launch.

Rhoades promised the NFTs would have secondary perks such as whitelists for drops and collaborations, “playing” with Rhoades, future CryptoSis models in the metaverse, inside metaverse clubhouses/communities or real-life tangible items and merchandise.

The project website had a roadmap with specific steps, none of which were never followed through and shortly after the 22 January launch, Rhoades disappeared from the Discord channel and deleted several promos. Those moves, along with the transfer of 509 ETHs attracted the attention of Coffeezilla, which launched a series of Tweets earlier this month.

Coffezilla shared some of the Cryptosis Discord posts, one of which said: “I spent what I can lose. Spent 4k. On total I had 6K. Man I’m left with 2k only. No job and I have a 2 yo son. If only bought my christmas Lana.”

“Now I want to clarify/state why Lana hasn't been around much the past few days, whenever she was hosting her AMA [ask me anything] the day after mint and discussing the future of the project, she was very shocked and upset by the amount of negativity and rude comments she was seeing in that chat. I know that everyone wants to make money with their project but you guys need to know only way to attract real investors and other people to purchase is POSITIVITY. Being negative in chats doesn't help anything or anyone. I would love for her to come back to a super supportive and happy community and this would also boost the total moral of this project,” an admin Discord post read, a screenshot of which was shared by Coffezilla.

Rhoades, as well as Victoria Daniel, Rhoades' representative and founder of PreludeManagement, and Carter Jamison, an 18-year-old entrepreneur, who are listed as the CryptoSis team were approached for a comment.

Earlier this week, Coffezilla posted a video on YouTube, where he details the case.

China looks to create an NFT market on its own terms