By Fitri Wulandari and Jekaterina Drozdovica

After hitting near an all-time high of above $2,000 an ounce in March 2022, gold prices have steadily declined. For most of 2022, the precious metal has been under pressure from interest rate hikes and monetary policy tightening by central banks around the world.

Yet by the end of the year, the trend may have reversed, with gold prices rising by 17% since November 2022 (as of 19 January). Year-to-date, the gold price rose by over 5% supported by the reopening of China, a key gold buyer, and weaker US dollar.

Will the new year revive the bullish momentum for the yellow metal and what’s the long-term outlook? Here we take a look at the gold price predictions for the next 5 years.

Gold was first discovered by Ancient Egyptians over 4,000 years ago. Throughout centuries the precious metal was used as a store of value and showcase of wealth. In the modern day and age, gold’s demand has expanded to industrial use, most notably in production of electronics.

As with many commodities, gold’s price is highly influenced by the forces of supply and demand. Yet the yellow metal is also seen as an investment asset, preserving value throughout centuries. Some investors believe in its safe-haven quality and use gold to hedge against inflation and economic uncertainty.

Gold is denominated in US dollars, which means the precious metal has an inverse relationship with the greenback. The USD strength against other currencies hurts the price of gold as it becomes more expensive and hence less attractive for overseas buyers. Conversely, when the USD is falling in value, it fuels gold demand.

Gold can be bought as a bullion in its physical form, or traded through financial derivatives. Some investors choose exposure to gold-mining stocks, or gold-linked exchange-traded funds (ETFs).

Gold was trading above $2,050/ounce in the first week of March 2022, close to the all-time high of $2,075/ounce seen in August 2020. However, the yellow metal lost its gains in the middle of March, falling below $2,000 as the US Federal Reserve (Fed) kicked off its monetary tightening to fight rising inflation. 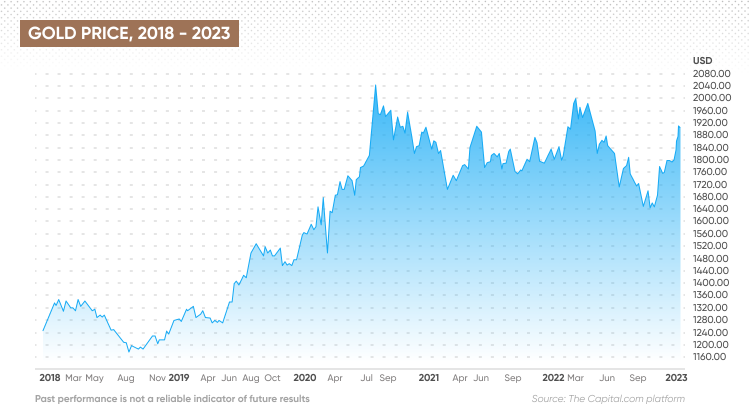 Gold was caught in a tug of war between runaway inflation and monetary policy tightening during the second quarter of 2022, causing the bullion to fall to $1,817 by end of June 2022. The yellow metal continued to weaken in the following quarter as it became evident that central banks were implementing aggressive rate hikes to tame stubbornly high inflation.

The precious metal attempted but failed to cross the $1,800/oz level in the third quarter despite deteriorating global economic outlook amid runaway inflation. The stronger US dollar as a result of the Fed’s hawkish rate hike has prompted investors to abandon non-yielding gold in favour of the greenback.  Gold dropped about 8% over the third quarter of 2022.

Yet by the end of the year gold has regained momentum, gaining over 17% between early November 2022 and late January 2023. The yellow metal passed the $1,900 mark on 13 January, climbing back to the levels not seen since April 2022.

Why is gold rising?

In 2023, the received support from the wider the wider economic pessimism and fears of the upcoming recession. Investors tend to hoard during times of uncertainty hoping that the metal will preserve its value.

Yet investors aren't the only ones who see gold as a hedge against economic downturn and inflation. Central banks’ demand for the precious metal rose to record volumes by the end of 2022, data from World Gold Council showed in November 2022, with Turkey, Uzbekistan and Qatar among the biggest buyers. The renewed appetite has boosted gold’s price since the end of 2022.

The reopening of China’s economy - one of the biggest buyers of gold - improved the outlook for the precious metal’s demand in 2023. The country’s central bank, People’s Bank of China (PBoC), has already increased its gold purchases by 32 tonnes, the first increase in its gold reserves since September 2019.

Plus, the weakening of the US dollar and the perceived slowing of Fed’s rate hikes is supporting the USD-denominated gold. The Fed raised the federal fund rate by 50 basis points (bps) at the December 2022 meeting, lower than the previous hikes of 75 bps.

“Since the start of the year, gold has been the beneficiary of a softer USD environment, lower yields as markets price in smaller rate hikes from the Federal Reserve. Alongside an increase in central bank demand, most notably from the PBoC. Add this to the fact that seasonal factors are supportive of the precious metal it is understandable why gold is currently on its longest weekly winning streak since August.”

“The US Fed’s hawkish rhetoric and raising of interest rates since June had stopped short gold’s rally sparked by the Russian invasion of Ukraine. With interest rates nearing their peak and the US dollar weakening, we are now neutral to bullish towards gold prices for the months ahead,” the firm said.

In its gold price projection on 12 December ABN-Amro Group estimated the precious metal to  average at $1,900/oz in 2023.

Meanwhile, JP Morgan’s head of base and precious metals strategy, Greg Shearer, said on 8 December that the US investment bank saw the risks for gold skewed to the upside in 2023. The analyst noted:

“A harder-than-expected economic landing in the US would not only attract additional safe-haven buying, but the rally could become supercharged by more dramatic decreases in yields if the Fed more rapidly unwinds tighter fiscal policy.”

In its gold price predictions on 16 January, ANZ Research analysts held a constructive view for the metal over the next year, with the physical demand expected to be strong in 2023 amid the reopening of China. Yet the ANZ bank’s research arm noted that short-term correction is likely in case of a hawkish Fed surprise that would support the US dollar:

“Any disappointment on the monetary policy front could see prices correcting in the short term. We keep our 12-month price target unchanged at $1,900/oz.”

Gold price predictions for the next 5 years: Long-term gold outlook

Fitch Solutions’ gold price forecast for the next 5 years in December 2022 predicted the bullion would fall beyond 2023 as the global economy would recover and the Russia-Ukraine war would resolve. Gold prices were expected to fall to $1,750 in 2024, $1,700 in 2025, and $1,690 in 2026 as the global economy was expected to bounce back in the latter half of the decade, according to the firm:

“For now we expect any kind of easing in the Russia-Ukraine conflict to come about [at the] earliest by 2024, which will reduce holdings of gold by the most risk-averse investors. Additionally, we believe most of the pandemic induced holdings of gold have now been reversed. As a result, despite our outlook for gold prices to weaken, we do not see a return to pre-Covid-19 levels.”

Algorithm-based price forecasting service WalletInvestor was bullish in their gold rate prediction for the next 5 years, seeing the metal rising to $2,257 by January 2028. WalletInvestor’s projected gold price to trade at  $2,026 in 2025.

Note that analysts’ and algorithm-based outlook for the gold price in the next 5 years can be wrong and shouldn’t be used as a substitute for your own research. Commodity markets remain volatile and shaped by the constant flux of economic and geopolitical events.

It’s essential to always perform your own due diligence before trading, looking at the latest news, a wide range of commentary, technical and fundamental analysis.

Note that past performance does not guarantee future returns, and never trade more money you can afford to lose.

Comprehensive gold trading guide: What you need to know about trading the precious metal

Commodities forecast: Which markets will surge in 2023?