The share price for US-based cryptocurrency exchange Coinbase (COIN) retreated after the company missed analyst estimates for the second quarter and reported a $1bn loss due to a downturn in cryptocurrency trading.

Coinbase reported a net loss in the first half of the year after turning a profit in 2021, as users turned away from collapsing cryptocurrency markets and the platform’s trading volume fell.

Yet, the COIN stock price still trades 60% higher than in early May and 90% higher than June’s low amid positivity in sentiment following the BlackRock partnership announcement.

Can the stock claw back its value, and what is the latest Coinbase stock forecast? Here we take a look at what factors shape the crypto exchange’s share price predictions in the current market environment.

Coinbase went public on the Nasdaq Stock Exchange in April last year, and initially traded above the early indicated price range at around $100, closing at $342 in the first session.

The COIN stock price dropped to $224.35 a share in late May, coinciding with a cryptocurrency markets selling off, and then continued to follow the price trend, climbing to its peak of $368.90 in November when bitcoin (BTC) climbed to its all-time high.

The stock started 2022 at the $251 level, and continued to trend lower, closing at $103.74 on 6 May. The price then plummeted to $53.72 on 11 May, the day after the company announced weaker than expected first-quarter earnings. 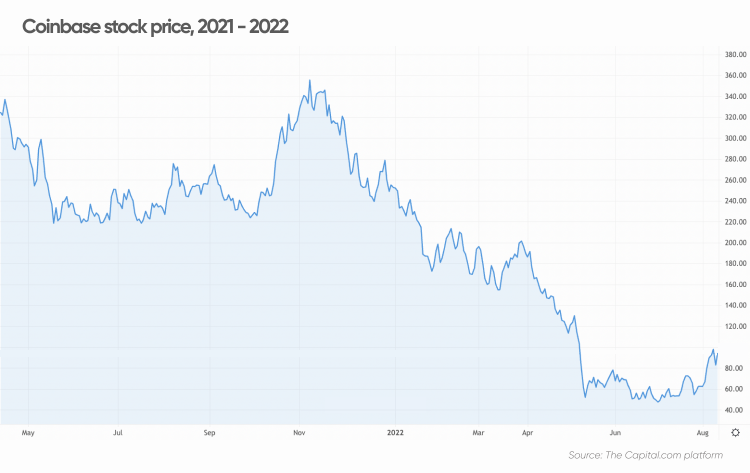 An impairment charge on the cryptocurrency on the company’s books pulled down its adjusted earnings before interest, taxes, depreciation and amortisation (EBITDA) to a loss of $151m, from earnings of $1.12bn a year earlier.

Coinbase noted that the total cryptocurrency market capitalisation declined by $1.3trn, around 60%, in the second quarter, “primarily driven by macroeconomic conditions and shocks to the crypto credit environment.”

What does that indicate for the Coinbase projected stock price in the coming years? The company noted in its shareholder letter that the cryptocurrency markets are cyclical.

What is your sentiment on COIN?

Give COIN a try

Start trading
or
Try demo
“We have observed four major crypto asset price cycles since 2010. Each prior cycle has lasted anywhere from two to four years and resulted in the crypto market capitalization significantly increasing compared to the preceding cycle. Each prior cycle brought in new market participants, developers, and products that further advanced the crypto economy,” the company said.
“Down markets are not as bad as they may seem. Yes, it can feel scary and near-term financials can be heavily impacted. That’s why we have worked hard to build a strong balance sheet to weather the storms,” Coinbase added.

The average price target from 23 analysts who have issued a 12-month Coinbase stock forecast was $162.10, according to data compiled by MarketBeat, as of 10 August, with estimates ranging widely from a low of $42 to a high of $455. There were 16 ‘buy’ ratings, five ‘hold’ and two ‘sell’ recommendations.

Following the strong rally in the COIN price in July and ahead of the second-quarter earnings report, analysts Carlton Lai and Steven Nie at Daiwa Capital Markets on 5 August slashed their Coinbase stock forecast from $200 a share to $100.

“Our long-term thesis on the sector and the company has not materially changed, but we acknowledge that the greater-than-expected drop in trading volumes and heightened competition with major exchanges have sharply reduced the revenue visibility of the company,” the analysts wrote in a Coinbase stock analysis for clients.
“In terms of positives, we believe Coinbase’s partnership with BlackRock’s Aladdin platform is a major win for the company, as it demonstrates institutional interest in crypto assets remains strong while it is also a testament of the quality of Coinbase’s platform as well as its regulatory compliance, in our opinion.”

Algorithm-based forecasting website Wallet Investor was bearish in its Coinbase stock forecast for 2022 at the time of writing, predicting that the share price would drop to $10.343 in December and $0.000000000001 by May 2023, raising questions about the stock’s future.

If you are looking for a Coinbase stock price prediction, we recommend that you always do your own research. Look at the latest news, technical and fundamental analysis, and expert opinion before making any trading decisions.

Note that analyst and algorithm-based Coinbase stock predictions can be wrong. COIN stock forecasts shouldn’t be used as a substitute to your own research. Remember, past performance is no guarantee of future returns. And never trade money that you cannot afford to lose.

EthereumMax price prediction: Where next for EMAX after Kim Kardashian settles SEC charge for $1.26m?