What is coffee? The origin of a cup of Java

Coffee price forecast: Is coffee the rally set to cool?

After consistently breaking new multi-year highs since 2021, the coffee price rally has started to lose steam. Since reaching a fresh high for the decade at above $2.50 a pound in February, the price of most popular Arabica coffee beans has been falling.

On the demand side, tightening monetary policy around the world has raised concern about a recession that could dent demand for the world’s most popular drink.

On the supply side, production from the top coffee producer, Brazil, is expected to rebound after the devastating frost that hit production last year.

What is coffee? The origin of a cup of Java

When we type ‘Java’ into online dictionaries, the two top definitions for the word are a computer programming language and a cup of coffee.

The first coffee seeds were brought to the Indonesian island of Java in 1696 by the East India Company, also known by its Dutch acronym VOC (Vereenigde Oost-Indische Compagnie), according to global food and agri-business firm, Olam Group.

By 1725, more than 1 million pounds of coffee from Java were sold every year at auction in Amsterdam. Today, coffee beans are planted in more than 50 countries around the world, from Southeast Asia to Latin Americas and Africa.

There are two main types of beans: Arabica and Robusta. Arabica is the most popular coffee bean due to its complex flavours, smoother, sweeter and less acidic taste. Arabica is preferred by coffee connoisseurs and global coffee chains, such as Starbucks (SBUX).

Robusta beans have a deeper and stronger taste than Arabica because the bean has higher caffeine content. Robusta is used in the production of instant coffee, such as for the brand Nescafe, owned by food and beverages giant Nestle (NESN). Vietnam is the world’s largest producer and exporter of Robusta beans.

Brazil is the world’s biggest producer of the Arabica variety and the world’s largest producer of coffee. Vietnam is the second largest coffee producer. Arabica beans account for 70% of all coffee traded on the market, with Robusta accounting for the remaining 30%.

What is your sentiment on Coffee Arabica?

Give Coffee Arabica a try

Coffee prices were under pressure during 2020. Covid-19 pandemic restrictions reduced coffee consumption in many markets as cafes, restaurants and offices closed to curb the spread of the disease.

The US Department of Agriculture (USDA) in December 2020 estimated global coffee output for marketing year 2020/2021 to rise by 7 million 60 kilogram bags year-on-year (YOY) to 175.5 million. Brazil accounted for most of the gain due to seasonal factors – its Robusta crop reached record output. 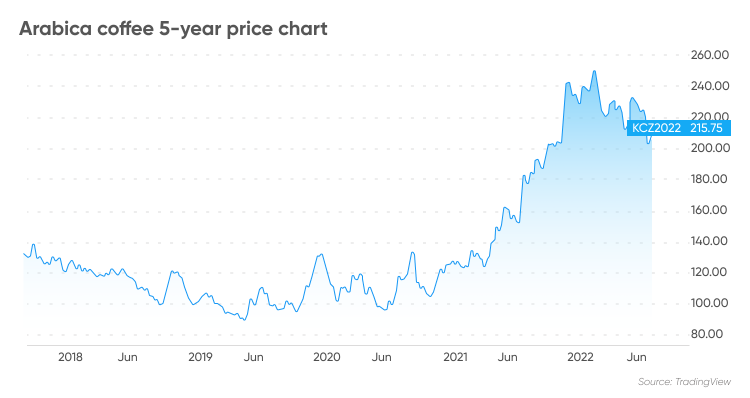 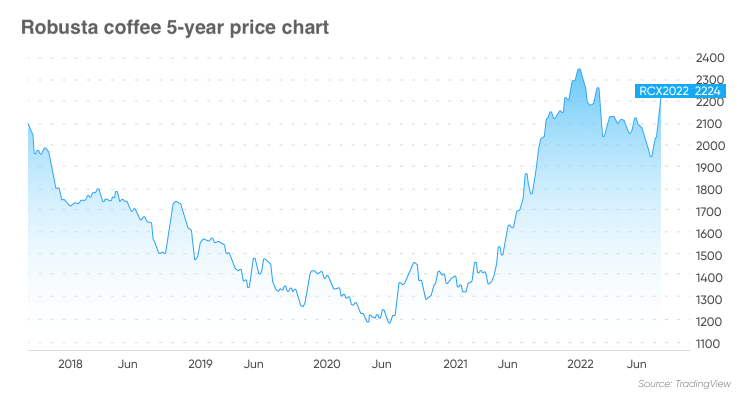 The Arabica coffee price had gradually rebounded from the start of 2021 mainly because of declining production from Brazil. Severe frost due to freezing weather in June and July 2021 damaged coffee cherries in Brazil’s Arabica coffee belt of Minas Gerais, São Paulo and Parana. Arabica beans account for 70% of Brazil’s coffee output.

In its July 2022 report, the International Coffee Organization (ICO) estimated total production from October 2021 to September 2022 remained unchanged at 167.2 million bags, a 2.1% decrease from the previous year’s 170.83 million bags.

Arabica futures at ICE traded at around $1.24/lb in early January 2021, continuing its rally for most of the year due tight global supply and hitting a fresh 10-year high at $2.49/lb on 6 December last year.

Since peaking in early December 2021, the coffee price cooled until Arabica futures briefly topped a new 10-year high of $2.59/lb on 9 February. However, Arabica futures did not manage to surpass the 2011 record high of $3/lb.

The Arabica coffee price has continued to fall since the February peak. At the time of writing (18 August), ICE’s Arabica futures contract was trading at $2.144/lb. Tight supply is expected to ease and there are concerns that recession may hit demand. The price has dropped 5.20% this year, but is up 18.06% year-on-year.

“Recession fear is the main driver of retreating the price of coffee in the futures market. The amount of inventory is gradually rising, as consumers start to cut food spending, including coffee, to fight off inflationary fear. In this trend, some hedge funds are liquidating its long positions, strengthening the current downward trend.”

“While the coffee futures prices are lower than in February 2022, they remain high and it is anticipated that the higher prices will continue in the coming months, if supply conditions get worse,” analysts at Tridge said.

In a note on 15 August, Fitch Solutions estimated that weakening demand would be the main cause of lower prices in the short-term:

“We anticipate a widespread tightening of monetary policy (in the face of broad-based price inflation) and weaker global economic growth, which will both weigh on consumer sentiment and result in reduced household spending on coffee and coffee-based products.

“In addition, barring another outbreak of the Covid-19 virus, we expect the continued unwinding of Covid-era logistical bottlenecks and logjams to further loosen the global coffee market.”

However, low inventories could offer some support until Brazilian coffee beans from the 2022/2023 crop, which is harvested in September, enter markets.

It forecast global production to grow by a compound annual growth rate (CAGR) of 2%, while global demand will rise at a CAGR of 1.7%, adding:

“The fluctuations in our expected production balances between individual years reflects that while production will retain a strong cyclical component (most notably in Brazil), we expect global consumption growth to be relatively stable in the long run, in spite of uneven developments at the sub-global level.”

The USDA reported in June that global coffee production for 2022/23 could rebound by 7.8 million bags from the previous year to 175 million bags, primarily due to Brazil’s Arabia crop. It expected global consumption to rise 1.8 million bags to 167 million.

In its coffee price forecast for 2022, Fitch Solutions revised up its projection for Arabica coffee futures this year to $2.15/lb from $2.1445 in its previous forecast.

Economic data provider Trading Economics also has a bullish outlook, forecasting the Arabica coffee price to trade at $2.33/lb by the end of this quarter, rising to $2.53/lb in a year’s time.

Bear in mind that like other commodities, coffee is a volatile asset. Prices are driven by unpredictable factors such as weather, geopolitical environment and consumption patterns. Analysts’ and algorithm-based coffee price predictions can be wrong and shouldn’t be used as substitutes for your own research.

Always conduct your own research. Remember that your decision to trade or invest should depend on your risk tolerance, expertise in the market, portfolio size and goals. Keep in mind that past performance doesn’t guarantee future returns. And never invest or trade money you cannot afford to lose.