As of 29 September, the Asian benchmark Newcastle coal index (NEWC) listed on the Intercontinental Exchange (ICE) has eased from the peak at $457.8 on 5 September, but remained above $400/tonne.

Supply is expected to remain tight on projected stronger European coal demand as the region diversifies its energy sources away from Russian coal and gas. The prospect of rebounding demand from China, which is reeling from fresh Covid-19 outbreaks, was also expected to further spike the price of power-station fuel.

What will be the direction for thermal coal prices this year and for the long term? In this article, we discuss the factors driving the coal market as well as the most recent coal price forecasts from analysts.

Coal serves many functions, the most important of which is to generate electricity. The fossil fuel was formed millions of years ago from the remains of dead vegetation that were buried beneath layers of the earth and decayed into peat land.

There are four types of coal based on their heating value, according to the United States Geological Survey. The top rank is Anthracite, also known as hard coal. It contains a high percentage of fixed carbon and a low percentage of volatile matter.

Thermal coal or power-station coal accounts for 79% of the global coal trade. The remaining is metallurgical coal, according to the International Energy Association (IEA).

There are three key benchmark prices in coal trade: 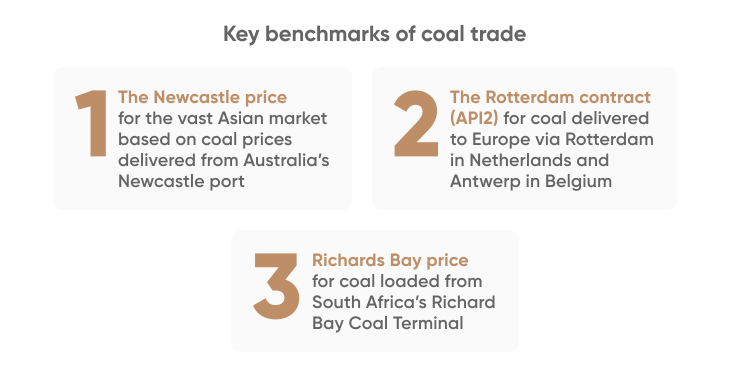 Prices vary in each region but the Newcastle price has remained the bellwether, as China and India account for two-thirds of global consumption. Trends in the global coal trade are determined largely by these two countries.

In the physical market, traders also watch closely the annual negotiation for supply contract between Australian miners and Japanese electricity generation companies. The supply contracts typically for the Japanese financial year which runs from April to March.

Coal is just as important as oil and gas for traders because fuel is the largest source of electricity generation and the second-largest source of primary energy. The swing in coal prices affects the economy, just as changes in oil and natural gas prices.

Power-station coal enjoyed a period of elevated prices up to mid-2018, with the Newcastle coal price touching $120.8 per tonne in August 2018. Prices then began to slide due to ample supply and continued well into 2019. Weaker electricity demand, lower liquefied natural gas (LNG) prices and import restrictions in China in the last quarter of 2019 added pressure to coal prices.

In Europe and the US, capacity at coal-fired power plants sank to a level unseen in decades on rising renewables and low LNG prices.

By the end of December 2019, the Newcastle coal price was hovering around $64 per tonne – about 47% below the highs in August 2018. It plummeted to $48 per tonne in September 2020, the lowest price in 2020, as Covid-19 restrictions crushed energy demand. According to IEA, global coal demand declined by 4% in 2020, the biggest drop since World War II.

The coal prices started to recover in the last quarter of 2020. A strong rebound in coal demand continued over 2021 as the global economy gradually recovered with more countries lifting restrictions.

A cold snap in northern Asia and rising demand from Europe which saw soaring natural gas prices due to problems with Russia’s gas supply accelerating coal prices in 2021.

Russia’s invasion of Ukraine on 24 February propelled the Newcastle spot coal price to $239 per tonne, from $161 in early January 2022. It soared to a record price of $435 on 7 March on heightened concern about Russian coal. Russia is the world’s third-largest coal producer.

The coal price chart showed it plunged to $260 level at the end of March and April as China faced a new wave of Covid-19 outbreaks, forcing some cities to go into lockdowns. But the price gradually rebounded, trading at above $400 a couple of times in May and July.

Flooding in Australia hampered production and transportation, and reports that China planned to end its unofficial ban on Australian coal imports also pushed up coal prices in the beginning of the second quarter.

Strike threat from US railway workers in mid-September to seek better welfare also heightened concerns about tight supply as it might affect US coal exports.

At the time of writing (30 September), Newcastle coal spot price retreated to $435.75 after the President Joe Biden and railway workers reached a tentative labour agreement on 15 September.

However, the price was hovering near record highs on th persistent gas crisis in Europe after explostions caused gas leaks in the Nord Stream 1 and Nord Stream 2 undersea pipelines. The North Atlantic Treaty Organization (NATO) claimed the leaks the were the result of “deliberate, reckless and irresponsible acts of sabotage” by Russia, according to the BBC. Russia has dismissed the accusation. 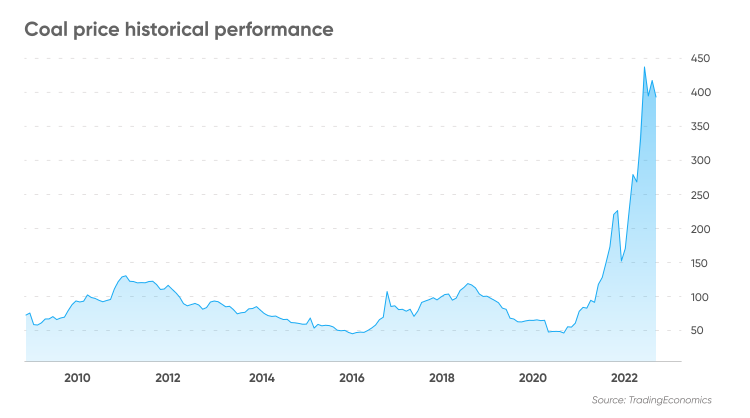 Wood Mackenzie on 20 September projected Europe seaborne thermal coal demand to increase 14% or 12m metric tonnes to 98Mt in 2022 due to the current energy crisis.

“With many European nations increasing thermal coal use, an additional nine gigawatts (GW) of coal-fired capacity has been made available to meet energy demands and make up for the decline in Russian energy imports. Coal prices are surging, but they are still more affordable than record-high gas prices,” said Adam Woods, Wood Mackenzie’s senior research analyst on 20 September.

However, Woods believed Europe’s jump in coal demand will be a short-lived bump and companies were unlikely to make major investment to expand infrastructure or long-term output as global demand was expected to decline.

“We expect higher European coal-fired generation to last until the middle of this decade. However, imported higher-quality coal generation will still be phased out completely by the end of the decade, although lower-quality domestic lignite generation could extend much further. The higher energy price outlook and supply security concerns make renewables more attractive,” said Woods.

The International Energy Agency (IEA) in its coal market update in July 2022 estimated the EU’s coal demand to increase by 7% year over year (YoY) to 476 million tonnes (Mt) in 2022 as EU countries are reducing gas consumption amid uncertainty over Russian gas supplies.

The IEA expects global demand to rise by 0.7% from 2021 to 8 billion tonnes in 2022, owing to slower economic growth in China, which weakened significantly in the second quarter due to renewed Covid-19 restrictions.

Coal consumption in China, which accounts for more than half of global coal consumption, was estimated to have dropped by 3% in the first half. With sluggish economic growth in the first six months of this year, the IEA forecast China’s coal demand to remain stable at 4.2bn tonnes.

“While an unexpected surge in demand has been a key driver of thermal coal prices, it is also worth noting that supply has significantly lagged too,” Bank of America (BofA) said in a note on 8 July.

“Most other coal producers from Indonesia to Russia to Australia are likely to see a net contraction in supply relative to last year, with huge variations in output in both 2021 and 2022 as our seaborne thermal coal supply and demand balances suggest,” it added.

“The bid on global coal prices has come on the back of reduced supplies of natural gas, but even coal supply is an issue in the short and medium term given the lead time required to expand or build a mine,” BofA added.

Economic provider Trading Economics forecast thermal coal to trade at $461 by the end of this quarter, rising to $550 in 12 months’ time.

When looking for thermal coal price predictions, it’s important to remember that analysts' forecasts can be wrong. This is because their projections are based on a fundamental and technical study of the commodity’s historical price movements. Past performance is no guarantee of future results.

It is essential to do your own research and always remember your decision to trade depends on your attitude to risk, your expertise in the market, the spread of your investment portfolio and how comfortable you feel about losing money. You should never trade money that you cannot afford to lose.

Natural gas price down due to 'softening indicators': US analyst