Momentum indicators are meant to help traders spot whether the market trend will continue or reverse. Below is our take on some of the most popular momentum indicators available on the Capital.com platform, and how you one could incorporate them into their trading strategy.

What is a momentum indicator?

Momentum indicators are tools used in technical analysis. They help traders understand the strength of a price trend.

They are called "momentum" indicators  because the principles behind price movements are similar to the ones used to calculate the speed, momentum and acceleration.

Using indicators of this type, traders can identify leading momentum trading signals. They seek to understand if the market is overbought or oversold at close, and if it could be about to change direction.

Examples of these momentum indicators include the Relative Strength Index (RSI) and the Rate of Change (ROC).

This type of momentum technical indicator compares the current price action to how the market has behaved over a past period of time, when it established a relative range (low to high and vice versa). These indicators try to show whether the market is stronger or weaker, while filtering out the volatility associated with leading indicators.

Examples include the Commodity Channel Index (CCI) and the Stochastic Momentum Index (SMI).

These are used primarily for trend-following signals. They are lagging indicators that compare the current price to averages over a previous period. Traders can observe if the price moves faster or slower relative to its average behaviour in the past. An example of such a momentum indicator is the Moving Average Convergence Divergence (MACD).

There is no single momentum technical indicator that fits all occasions. That’s why it’s essential to know different indicators and how to use them in different trading strategies.

For example, traders are advised to avoid using a momentum indicator suited for sideways markets when a market is trending.

The Relative Strength Index (RSI) is the most commonly used momentum indicator. It works by comparing the average number of higher closes in a given period, divided by the average number of lower closes. It then inverts it to create an oscillator of 0 to 100, with overbought and oversold levels at 70% and 30%, respectively.

The RSI uses 14 periods as default. The period is used as follows to calculate RS:

Rather than identifying overbought and oversold zones, many traders use the RSI to identify divergences. This is where as the price continues to trend, the momentum indicator points the other way. 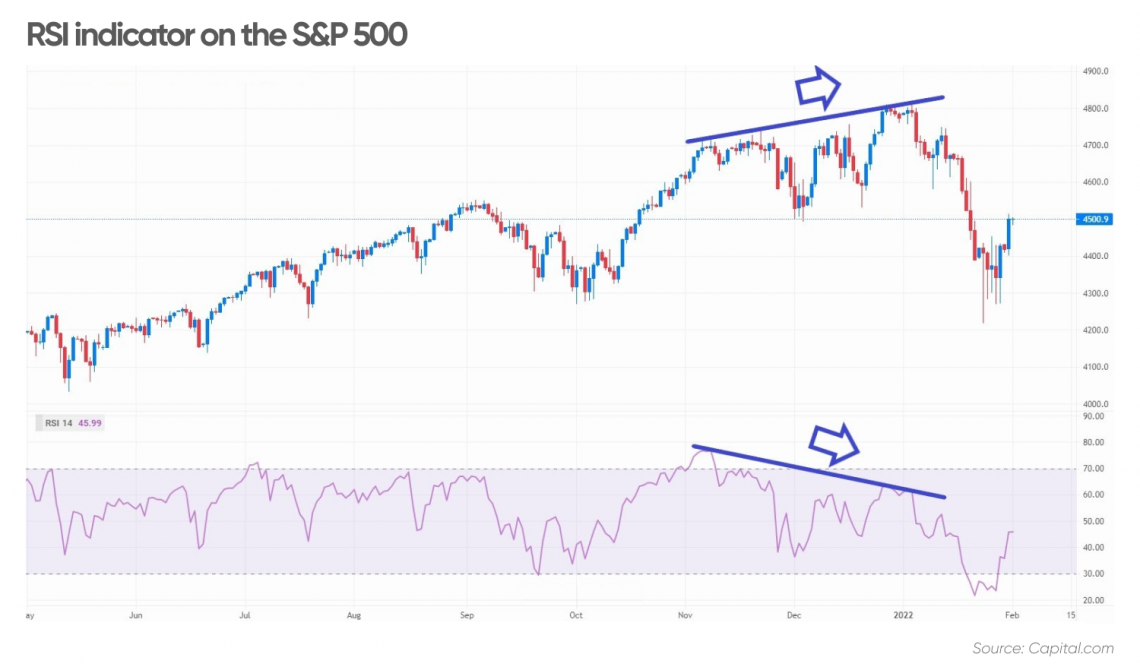 The ADX is the average of the -DI and +DI, which are calculated from the comparison of two consecutive ‘lows’ and the respective ‘highs’, using the average true range (ATR).

It does this via the following rather extensive momentum indicator calculation: 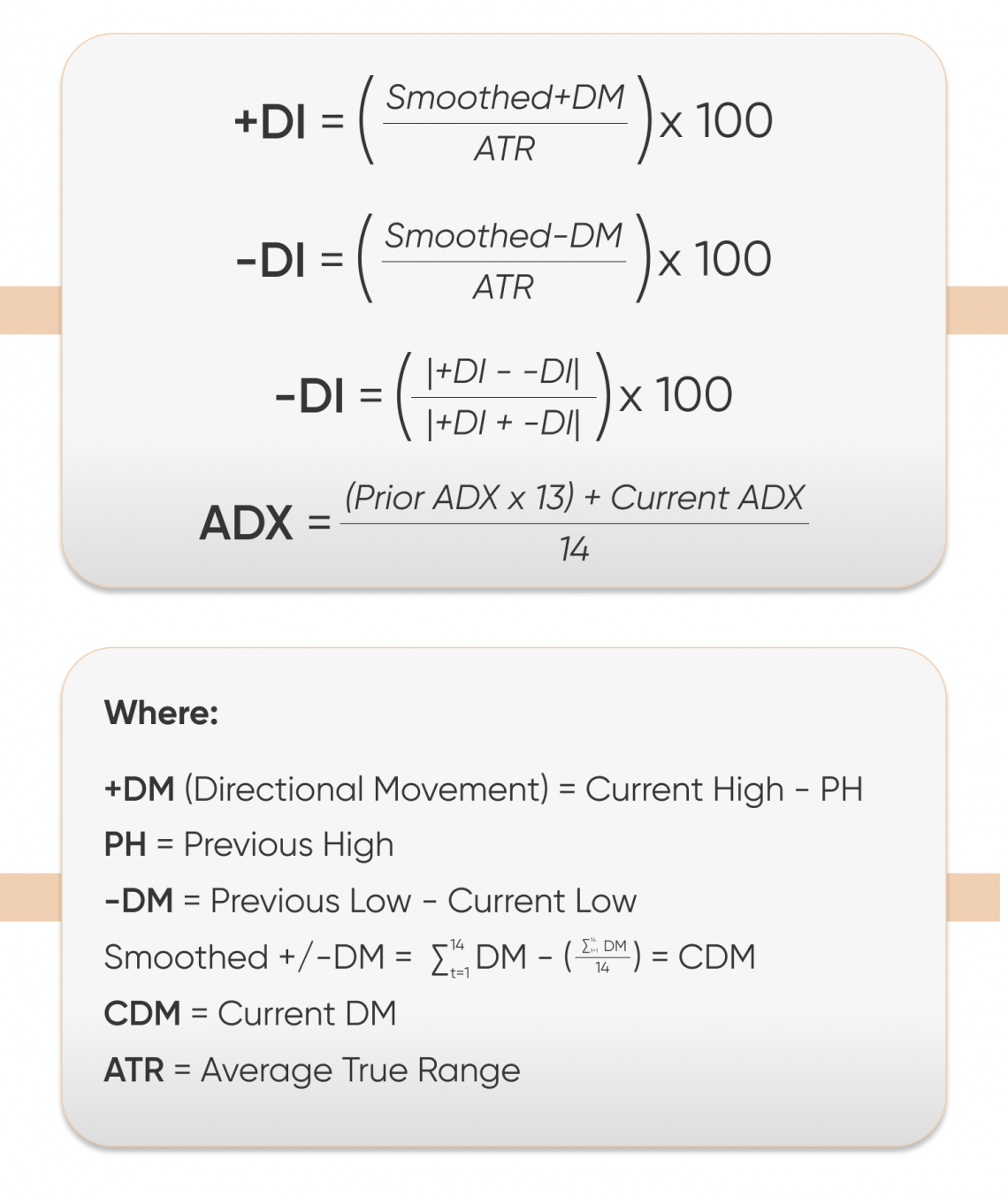 Behind the mathematics, the intent is quite simple: to measure the difference in the price range of the current bar or candle versus the previous 13 candles and then smooth out the differences. 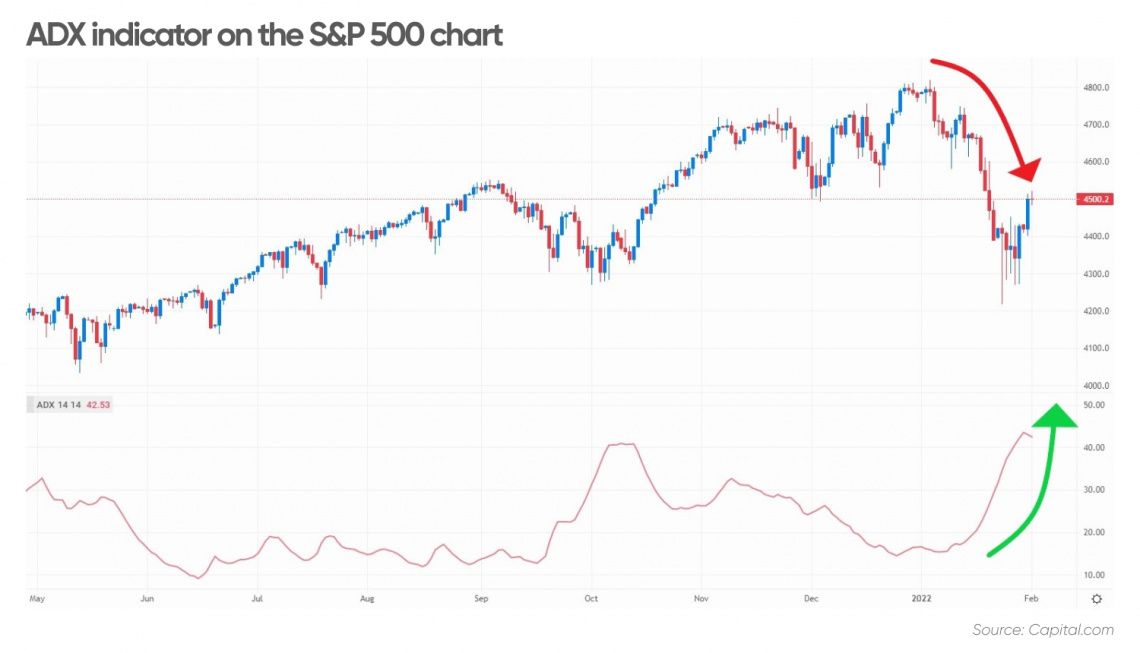 ADX rises when the price momentum increases, whether the trend is up or down. Since downtrends tend to be the most volatile, quite often the ADX will move up as the price moves down.

Commodity Channel Index (CCI) uses a formula comparing the "typical" price of the asset with a moving average, and then to the mean deviation: 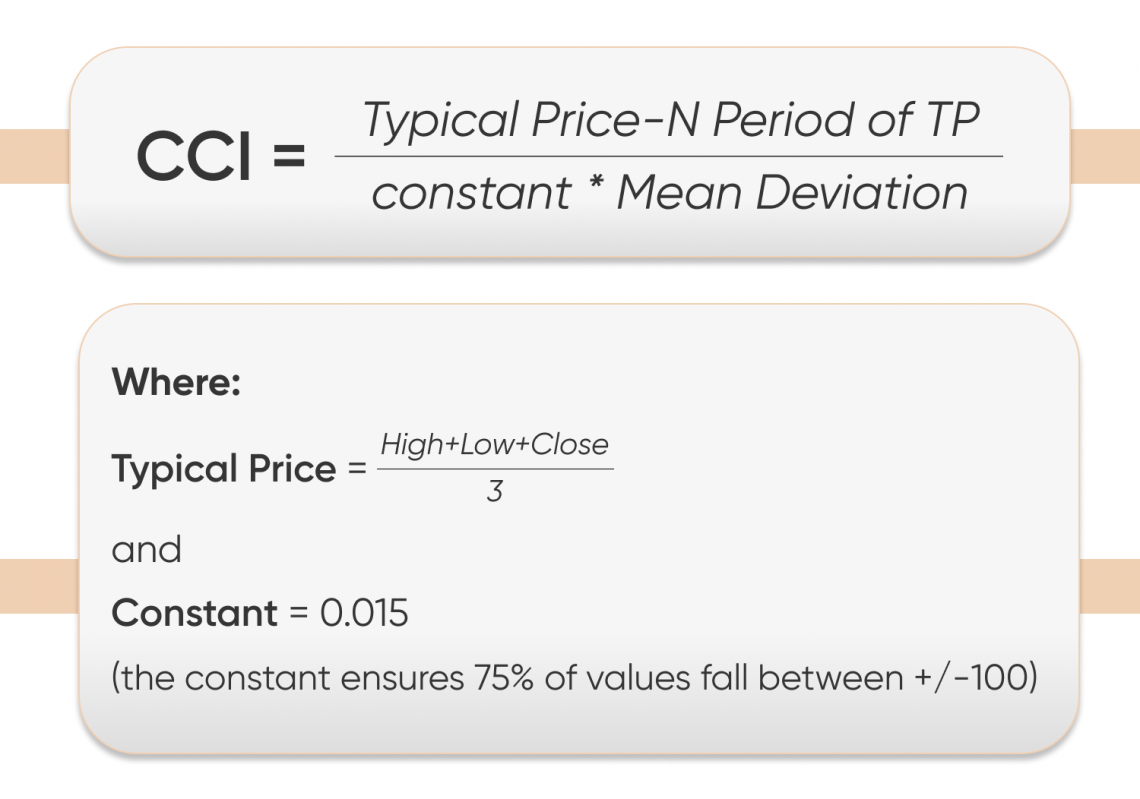 Generally, CCI is used to find indications of a new trend when ranges break.

Looking at the chart below, it can be seen that the price moving out of the middle band (-100 to +100) and then back into it is associated with turning points.

Note: Like many momentum indicators it pays to take the signal in the direction of the underlying trend. Countertrend signals tend to fail more often.

To summarise these rules for taking trades from the CCI in an uptrend, let’s look at the S&P 500 chart below 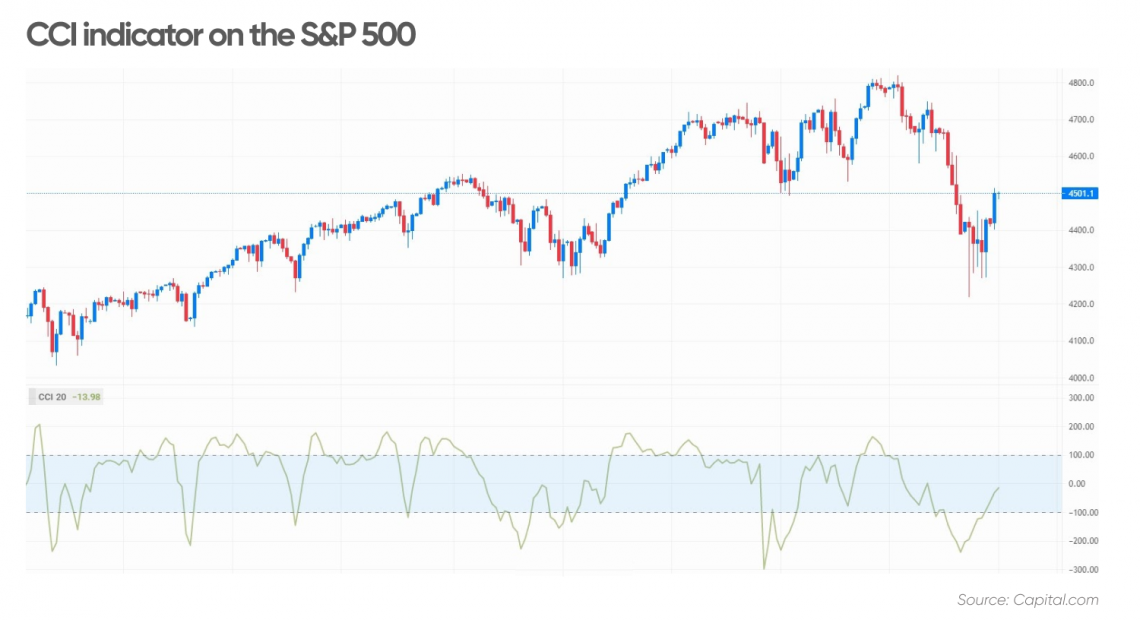 The CCI value suggests that the S&P 500 has left the oversold zone and may have turned into a ranging or bullish market.

Aside from trading when the  price reaches the ranges between +/-100, traders use the CCI to identify extremely overbought and oversold zones with boundaries at +/-200.

The Moving Average Convergence Divergence (MACD) is one of the top momentum indicators for trend continuation. It works by comparing a longer exponential moving average (EMA) to a shorter term EMA to produce the MACD line. That results in the ‘histogram’. That histogram then has a simple moving average calculated on top of it, called the ‘signal line’.

Here is the calculation for each component of the indicator:

The MACD uses the difference between the slower and faster EMAs to determine the market speed. The EMAs' defaults are 12 and 26 days. The rate is averaged out in the signal line, often at the nine-day EMA.

The generally understood trigger for trades using the MACD is when the signal line crosses the histogram (crossover). This can be interpreted as a change in the market's momentum, which could lead to a change in the price trend. 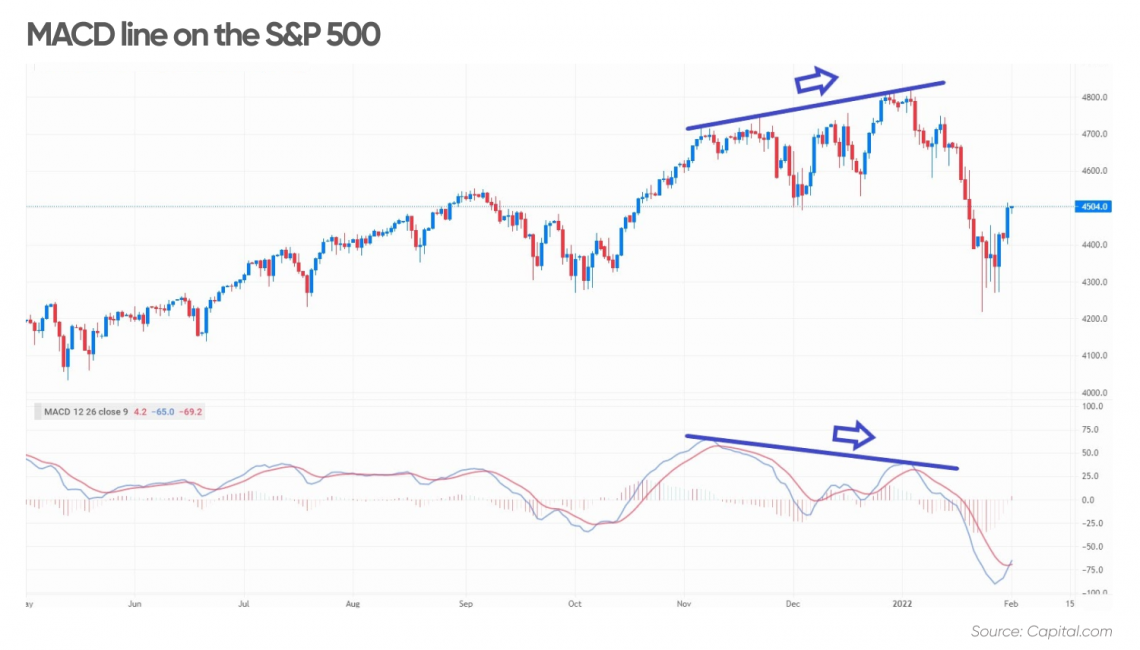 As its name suggests, when the lines converge, the price tends to continue in the direction of the trend. When they diverge, it reverses.

To add strength to the crossover signals, traders will use both the EMAs and the histogram. In addition, traders use price crossing over the zero line for bullish or bearish signals.

The equation compares the last closing price to a previous closing price from a set number of periods ago. The default setting is 14. Some traders use 30 to further smooth out the signals.

On the SPX chart below, two kinds of signals can be observed with the momentum indicator divergences (blue lines) and overbought and oversold signals (red circles). 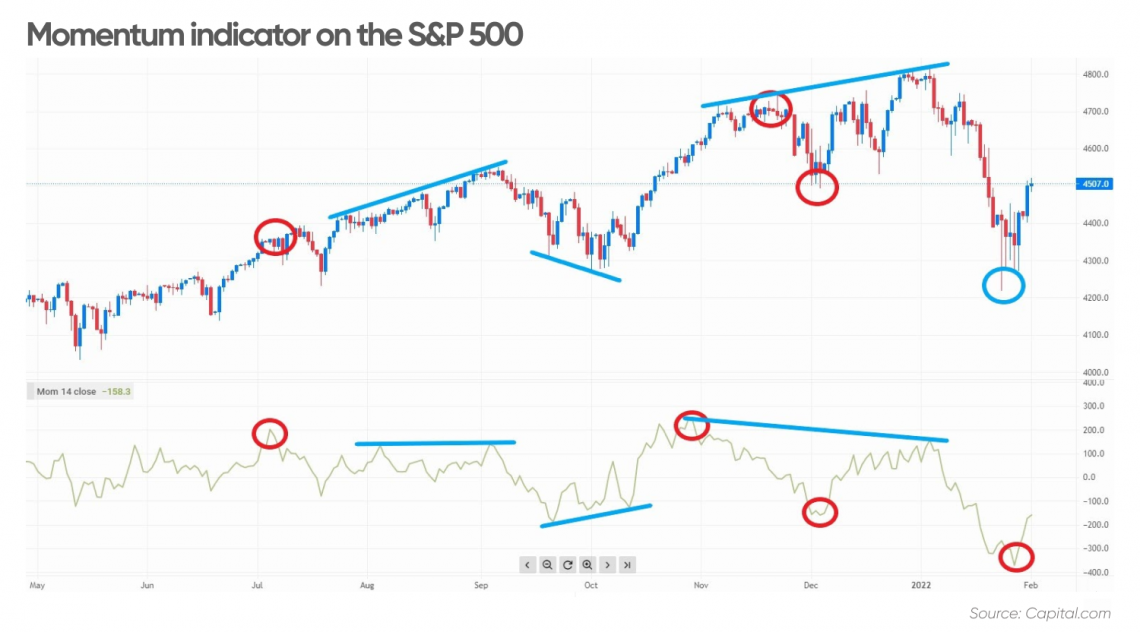 The momentum indicator has less smoothing than other momentum-type indicators like RSI so the signal line is more reactive. Often the first signal will occur before any price turning point. That’s why it can help to use other indicators to confirm a momentum signal before placing a trade.

Using momentum indicators to trade is about preference, strategy and the trading environment. The momentum indicators listed above can be used for mean reversions, range bound markets and trends. How you use them for each market type could produce a different return on investment.

The concept behind this momentum trading example trading strategy is to:

The trading example below uses the ROC, the CCI and the MACD together. The indicator settings to use are:

A trader could consider going long if:

Steps for a long trade example: 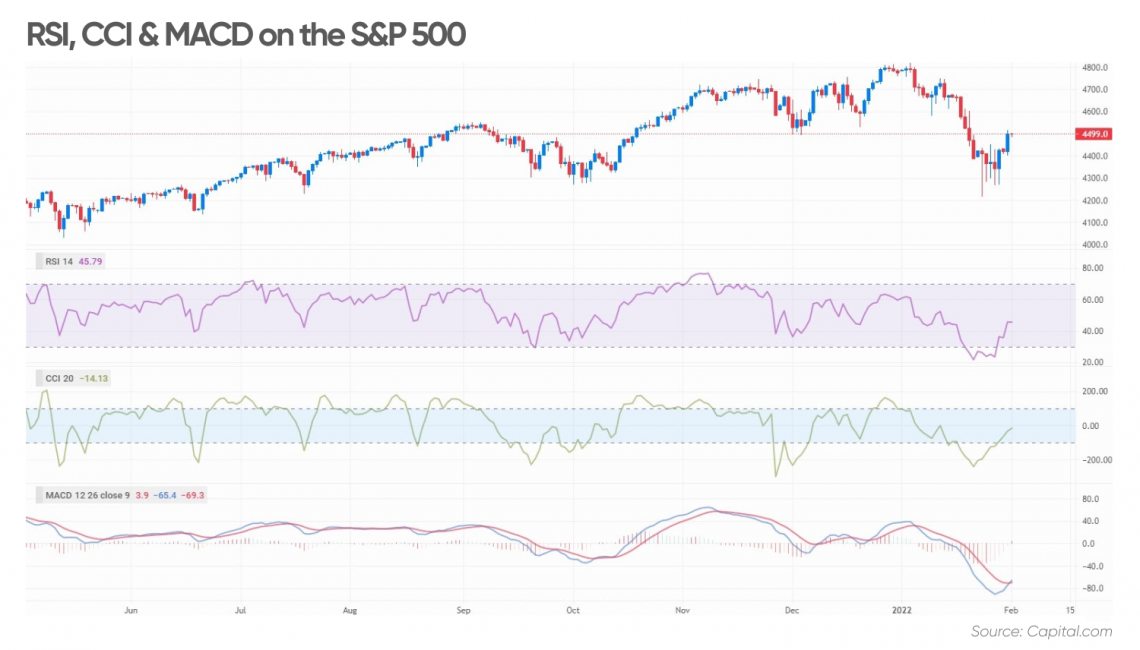 Note that this article does not constitute financial or investment advice. Whether you should go long or short is your decision. Always conduct your own due diligence before trading, considering your attitude to risk, experience in the market and portfolio margin. Never trade money you cannot afford to lose.

How to trade in a bear market: Key strategies

What is Buying on Margin? Your guide to gaining magnified exposure to assets