It was one of the most prominent play-to-earn cryptos to emerge during the metaverse boom, but what is axie infinity (AXS)?

Let’s see what we can find out, and also cast our eyes over some of the axie infinity price predictions that were being made as of 19 December 2022.

What is axie infinity?

One of the most notable crypto-related trends to hit headlines in 2021 was that of The Metaverse. While the idea that people could enter an online world and interact with other people via their computer-generated avatars had been around since the virtual reality craze of the early 1990s at least, it was in 2021 that the concept really started to take over.

People linked up their online spaces with non-fungible tokens (NFTs), the rights to individual pieces of digital art, and despite the fact that metaverse-related coins and tokens seem to have borne the brunt of 2022’s bearish crypto market, they are still a notable sector of the crypto world.

One sector of the metaverse takes the idea that people can buy and sell NFTs to another level. There are some games on the blockchain that allow people to utilise their in-game NFTs to take part in things like battles and challenges, getting the chance to earn both NFTs and regular cryptocurrency tokens in the process.

Since the various kinds of tokens can be traded for a theoretical profit, that means that these games can, again theoretically, make people a profit. This particular sector of games are called, appropriately, play-to-earn, or p2e for short.

One of the most prominent play-to-earn games is Axie Infinity. This game was created by Vietnamese company Sky Mavis and allows participants to compete by battling to collect individual cards representing cartoon monsters. These creatures, called Axies, fight each other, with the winner getting rewards.

These rewards take the form of the two native tokens of the Axie Infinity game, axie infinity shards (AXS), more commonly known as axie infinity, and small love potion (SLP). AXS is the rarer crypto, and therefore it is more valuable. The cards are all individual NFTs, and they can be bought, sold and traded on the game’s marketplace.

As the system’s whitepaper says: “Axie infinity shards (AXS) are an ERC-20 governance token for the Axie Universe. AXS holders will be able to claim rewards if they stake their tokens, play the game, and participate in key governance votes.

“Players will also be able to earn AXS when they play various games within the Axie Infinity Universe and through user-generated content initiatives.”

The site also says that the goal of axie infinity is “to align the incentives between the players of the game and the developers in novel and exciting ways”.

There is one particular issue that we need to address. Axie Infinity first made headlines in 2020, when it was reported that an unspecified number of people in the Philippines were supplementing their incomes by playing Axie Infinity. This was all well and good, but the truth was that the piece in question was written by the director of a consulting firm who represented play-to-earn games, including those by Sky Mavis investor Animoca Brands, in the Asia Pacific region.

Also, the one person named as making money from playing the game’s social media presence appears to be a Twitter feed that started just after the original article was released – which was before AXS was widely traded – and has not been updated since January 2021. That might suggest that the reports may not have been as accurate as some people, keen to display their enthusiasm for crypto as a harbinger of a new industrial revolution, believed, having quite possibly fallen for an unverified, glorified press release.

Even when the ever-changing crypto world moved on, there were still hold-outs who took the piece at face value, giving AXS a prominence it may not have deserved.

One other thing to point out is that the Axie Infinity game’s blockchain, Ronin (RON), fell victim to the largest crypto hack in history in April 2022, when hackers took control of the network and transferred more than $600m worth of crypto into a wallet.

Talking of blockchains, since the AXS crypto itself operates on Ethereum (ETH), that means that it is a token, rather than a coin. You might see references to such things as an ‘AXS coin price prediction’, but such terms are, technically speaking, incorrect.

What is your sentiment on AXS/USD? 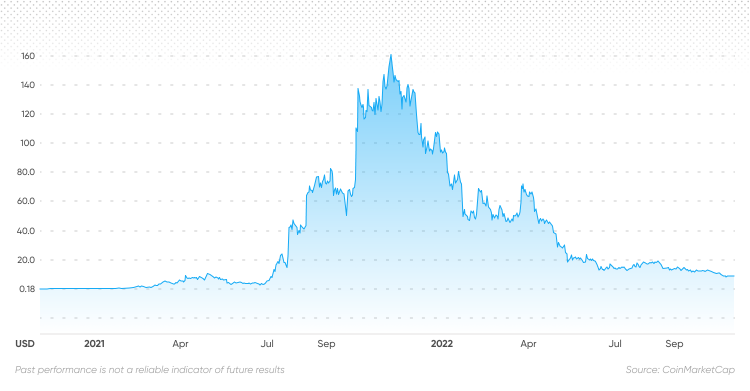 Let’s now take a quick look at some of the AXS price history. While past performance should never be taken as an indicator of future results, knowing what the token has done previously can help give us some important context when it comes to either interpreting an axie infinity price prediction or making one of our own.

When AXS first came onto the open market in November 2020, it was worth about $0.18. After that, it got caught up in the crypto boom of early 2021 and reached a periodic high of $10.85 on 28 April that year. There was then a dip as the market slumped over the summer, but the news that bitcoin (BTC) had reached record levels later on in the year, coupled with a growing interest in play-to-earn, the Metaverse and NFTs, saw it reach an all-time high of $160.36. That high could not be sustained and it closed the year at $93.30.

Although there was a small recovery after that, the collapse of the FTX (FTT) exchange sent the market into turmoil and AXS dropped to a low of $5.84 on 9 November before it made a small recovery which culminated in a high of $9.54 on 6 December. After that, though, it fell back down again and, on 19 December 2022, it was worth about $6.95.

At that time, there were about 99.6 million AXS in circulation out of a total supply of 270 million. This gave the token a market cap of about $690m, making it the 53rd-largest crypto by that metric.

With all that over and done with, let’s take a look at some of the axie infinity price predictions that were being made as of 19 December 2022. It is important to remember that price forecasts, especially when it comes to a commodity as potentially volatile as cryptocurrency, often turn out to be wrong. Also, you should note that many long-term price predictions are made using an algorithm, which means that they can change at a moment’s notice.

First, CoinCodex had a rather gloomy short-term axie infinity crypto price prediction. The site argued that the token could fall to $6.84 by 24 December and continue to drop to $6.42 by 18 January 2023. The site’s technical analysis was bearish, with 22 indicators sending negative signals and just eight making bullish ones.

The site then made an axie infinity price prediction for 2030 of $97.51, before claiming that it could break through the $100 barrier to trade at a potential $132.99 the following year.

Finally, Wallet Investor was far more downbeat and bearish when it came to making an axie infinity price prediction for 2023, saying that the token was in for a tough 12 months, forecasting it to fall to a mere $0.687 by the middle of December 2023.

When considering an AXS token price prediction, it’s important to keep in mind that cryptocurrency markets remain extremely volatile, making it difficult to accurately predict what a coin or token’s price will be in a few hours, and even harder to give long-term estimates. As such, analysts and algorithm-based forecasters can and do get their predictions wrong.

If you are considering investing in cryptocurrency coins and tokens, we recommend that you always do your own research. Look at the latest market trends, news, technical and fundamental analysis, and expert opinion before making any investment decision. Keep in mind that past performance is no guarantee of future returns, and never trade with money that you cannot afford to lose.

How to transfer crypto from an exchange to a wallet

BTC/USD 23044.85
Trade
-2.500%
XRP/USD 0.41152
Trade
-2.570%
ETH/USD 1605.27
Trade
-1.050%
LUNC/USD 0.00017530
Trade
-1.860%
DOGE/USD 0.0869090
Trade
-1.370%
The difference between trading assets and CFDs
The main difference between CFD trading and trading assets, such as commodities and stocks, is that you don’t own the underlying asset when you trade on a CFD.
You can still benefit if the market moves in your favour, or make a loss if it moves against you. However, with traditional trading you enter a contract to exchange the legal ownership of the individual shares or the commodities for money, and you own this until you sell it again.
CFDs are leveraged products, which means that you only need to deposit a percentage of the full value of the CFD trade in order to open a position. But with traditional trading, you buy the assets for the full amount. In the UK, there is no stamp duty on CFD trading, but there is when you buy stocks, for example.
CFDs attract overnight costs to hold the trades (unless you use 1-1 leverage), which makes them more suited to short-term trading opportunities. Stocks and commodities are more normally bought and held for longer. You might also pay a broker commission or fees when buying and selling assets direct and you’d need somewhere to store them safely.
Capital Com is an execution-only service provider. The material provided on this website is for information purposes only and should not be understood as an investment advice. Any opinion that may be provided on this page does not constitute a recommendation by Capital Com or its agents. We do not make any representations or warranty on the accuracy or completeness of the information that is provided on this page. If you rely on the information on this page then you do so entirely on your own risk.