In 2022, the Amazon (AMZN) stock price was slashed in half amid risk-off sentiment and fears of a global recession.

Rumours of massive layoffs taking place at the e-commerce giant have materialised as the retail giant’s CEO, Andy Jassy, confirmed that the company plans to let go more than 18,000 employees, the biggest reduction in Amazon’s workforce in its history.

Is this a signal that Amazon expects to take a stronger hit as the global recession unfolds, or are the layoffs simply a necessary step to stimulate business performance? Here we take a look at Amazon stock forecast and news driving the AMZN stock price.

The company was founded in 1994 by entrepreneur Jeff Bezos. He recognised the e-commerce potential of the fast-growing internet.

Amazon was originally an online bookselling platform – being able to list all titles online gave the company an advantage over in-person booksellers who had to print long and expensive paper catalogues. In its early years, Amazon famously operated out of Bezos’s garage in Bellevue, Washington.

However, it would be several years before Amazon would turn a profit. In the fourth quarter of 2001 – amid the bursting of the dot com bubble that saw the destruction of many e-commerce companies – Amazon posted a profit of $5m.

The company would continue innovating over the following years, launching products and services, including two-day membership delivery Amazon Prime in 2005, electronic reading device Amazon Kindle in 2007, and electronic voice assistant Echo & Alexa in 2016.

Amazon also branched out into music and film with Amazon Music and Amazon Instant Video.

What is your sentiment on AMZN?

Give AMZN a try

Amazon stock slashed in half in 2022

Amazon stock is currently trading at the levels not seen since the March 2020 market turmoil. The stock has enjoyed a bull run in 2021, reaching a record $188.65 intraday high on 13 July.

2022, however, has painted a different picture, with the war in Ukraine, soaring inflation and aggressive monetary tightening seeing AMZN stock losing 50% in the year. 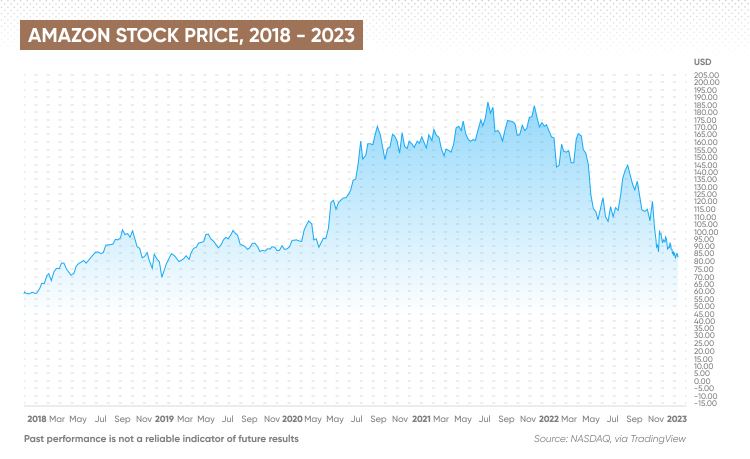 Past performance is not a reliable indicator of future results

Massive layoffs welcomed by the markets

“These changes will help us pursue our long-term opportunities with a stronger cost structure; however, I’m also optimistic that we’ll be inventive, resourceful, and scrappy in this time when we’re not hiring expansively and eliminating some roles.”

Market participants reacted negatively to the announcement, with the AMZN stock price falling 2.37% on the day.

AJ Bell investment director Russ Mould said in a note shared with Capital.com that even though the workforce reduction is the biggest in history, it becomes a “drop in the ocean” when viewed in the context of the 1.5 million total Amazon employees. He added:

102.19 Price
+3.240% 1D Chg, %
Trade Now
Swap short:
Swap long:
Trade Now
“It’s also important to consider where the cuts are being made. They are mostly in areas like human resources as well as its Amazon Go and Amazon Fresh physical stores, and the latter represent something of an experiment for the company.”

Mould pointed out that the retail giant is likely to focus on its core e-commerce and Amazon Web Services cloud operations, noting that the announcement will be viewed positively by the shareholders as it signals higher returns.

“Still, these job cuts represent a significant increase on previously outlined levels. It shows Amazon is taking the current economic challenges seriously. As is often the case, the news was pleasing to shareholders who will prize any efficiencies which can increase their slice of the returns generated by the business.”

US recession fears hurt the stock

In late April 2022, Amazon’s stock fell 14% on the day the company released its financial results for the first quarter of 2022. Back then, the company reported a $3.8bn net loss due to a $7.6bn markdown of its investment in Rivian (RIVN), the electric vehicle startup in which the company has a large stake.

The stock price has not recovered with the US Federal Reserve (Fed) bringing interest rates to 4.25%-4.5% at the December meeting. The aggressive monetary tightening coupled with the war in Ukraine has turned global investor sentiment sour, raising concerns about the US recession.

Amazon is a large e-commerce business with revenues primarily coming from its North American business. The performance of the US economy is highly relevant to determine how the company will perform financially in the future.

“Powell remained adamant, as we have noted, that he expects to maintain a significantly restrictive policy stance until incoming data support a high degree of confidence that inflation will fall to 2% on a sustained basis”, analysts from S&P Global commented in a December note.

“Indeed, not a single FOMC participant expects to start cutting interest rates before 2024, in contrast to investor expectations that rate cuts could begin as early as next September.”

Meanwhile, around 30% of the global economy could be poised to enter a recession according to the International Monetary Fund (IMF), while the largest three economies in the world – the US, China, and the European Union – will be growing at a slower rate compared to 2022.

Amazon stock forecast for 2023 and beyond

According to data compiled by TipRanks as of 23 January, the consensus analyst forecast for Amazon stock price was bullish. A total of 35 out of 39 analysts rated the stock as a buy, while four gave it a hold rating.

Analysts have been lowering their price targets for Amazon in the past year. According to data from MarketBeat, UBS Group, Evercore ISI, JPMorgan & Chase, and Piper Sandler have been among the firms to slash their 12-month Amazon share price forecasts from November 2022 to January 2023.

Among the algorithm-based forecasting services, Gov Capital was holding a bearish short-term Amazon stock predictions stock based on an analysis of multiple technical indicators as of 23 January.

The forecaster was far more optimistic about Amazon’s long-term future, predicting that the stock could hit $893.525 five years from now.

Note that analysts’ and algorithm-based Amazon stock forecasts can be wrong and shouldn’t be used as a substitute for your own research. Always conduct your own due diligence before trading, looking at the latest news, technical and fundamental analysis and a wide range of expert commentary.

Remember, past performance does not guarantee future returns. And never trade more money than you can afford to lose.

Amazon stock split: Will it help the share price rebound?

TSLA 177.70
Trade
+11.230%
AMZN 102.19
Trade
+3.240%
BBBY 2.54
Trade
+2.480%
NVDA 203.66
Trade
+4.750%
AAPL 146.01
Trade
+1.710%
The difference between trading assets and CFDs
The main difference between CFD trading and trading assets, such as commodities and stocks, is that you don’t own the underlying asset when you trade on a CFD.
You can still benefit if the market moves in your favour, or make a loss if it moves against you. However, with traditional trading you enter a contract to exchange the legal ownership of the individual shares or the commodities for money, and you own this until you sell it again.
CFDs are leveraged products, which means that you only need to deposit a percentage of the full value of the CFD trade in order to open a position. But with traditional trading, you buy the assets for the full amount. In the UK, there is no stamp duty on CFD trading, but there is when you buy stocks, for example.
CFDs attract overnight costs to hold the trades (unless you use 1-1 leverage), which makes them more suited to short-term trading opportunities. Stocks and commodities are more normally bought and held for longer. You might also pay a broker commission or fees when buying and selling assets direct and you’d need somewhere to store them safely.
Capital Com is an execution-only service provider. The material provided on this website is for information purposes only and should not be understood as an investment advice. Any opinion that may be provided on this page does not constitute a recommendation by Capital Com or its agents. We do not make any representations or warranty on the accuracy or completeness of the information that is provided on this page. If you rely on the information on this page then you do so entirely on your own risk.