We used to speak about oil as a singular homogeneous substance. But how many types of crude oil can we really differentiate?

Extracted in its natural unrefined state from the ground, crude oil significantly varies in its consistency and density – from a volatile and relatively thin liquid to a semi-solid and viscous substance. Still, often referred to as the ‘black gold’, the color of different crude oils may also vary from a light, golden yellow to dark black.

The four principal types of oil are:

This type tends to be very volatile, evaporating in just a few days, which makes it less toxic.

This type is moderately toxic and volatile. It is mainly used for the following crude oil products: fuel oils (grade 1 and grade 2), diesel fuel oil and domestic fuel oils.

The most common type of oil with low volatility and higher viscosity, which makes it more toxic and potentially more hazardous and challenging during occasional cleanups.

The least volatile, the most toxic and viscous type of oil.

It is mainly used for the following crude oil products: the heaviest 3, 4, 5 and 6 fuel oils and heavy marine fuel.

Did you know that there are over 160 different types of crude oil traded on the market? West Texas Intermediate (WTI), Brent Crude, OPEC Reference Basket, Dubai Crude, Bonny Light and Urals are just six of many. Luckily, you don’t have to learn the whole list.

Instead, you’d better take a look at the 3 primary oils, which are considered the world’s most important oil benchmarks and draw the most serious attention among investors and analysts.

WTI, often referred to as US Crude, is a premium-quality crude oil, highly valued around the world. It’s a common belief that more and better gasoline may be refined from one barrel of WTI than from any other type of oil traded on the market.

West Texas Intermediate is a light and sweet crude oil refined in the United States, which is one of the largest gasoline-consuming countries. WTI is usually priced $1 or $2 higher than it’s peer Brent Crude oil and $5 or $7 higher than OPEC Basket oils.

Brent Crude is also an important benchmark, which typically serves as a benchmark for oil prices around the world. Mostly extracted from the North Sea, it consists of Brent Blend, Forties Blend, Oserberg and Ekofisk crudes – known as the BFOE Quotation.

Brent Crude is also an excellent source for producing gasoline and middle distillates. Mostly refined in Northwest Europe, Brent Crude is a primary oil type in Europe and Africa.

OPEC oil serves as a combination of seven different types of crude oil coming from Saudi Arabia, Nigeria, Algeria, Dubai, Venezuela, Indonesia and Mexican Isthmus. Founded in 1960, OPEC, or the Organisation of Petroleum-Exporting Countries, is one of the major players in the oil industry, managing oil production and sale within its jurisdiction.

OPEC oil is less sweet and much darker than WTI and Brent, which makes it a bit cheaper, but it remains extremely important on the global oil market.

The top 10 global oil producers are the following: 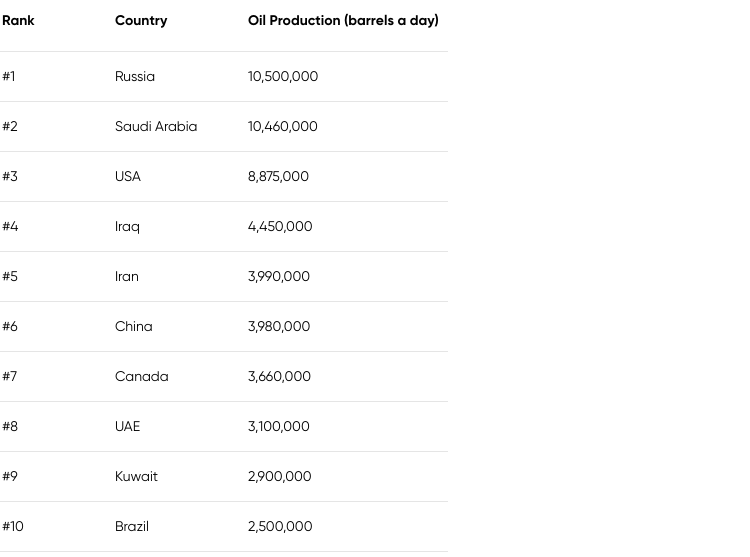 Platinum vs palladium: Which metal to choose?

How to invest in gold: Your guide to the precious metal

What is a commodity supercycle and are we in one right now?

How to invest in gold and silver: your ultimate guide to the metals market