US wheat prices have fallen over the past month to levels last seen before the Russian invasion of Ukraine.

The front-month Chicago wheat prices have been rising since Russia’s invasion of Ukraine on 24 February, and hit a record high of $13.40/bu on 4 March, as seen on the wheat price graph from agriculture columnist Karen Braun below.

According to the CBOT’s historical wheat prices, the peak on 4 March exceeded the previous record high of $13.34/bu on 1 February 2008.

Fresh planting data from the US Department of Agriculture (USDA) highlighted that grain acreage and stock levels were above market expectations. This data added to projections of higher supplies, as North American farms are ahead of schedule in their harvesting season.

A strong crop from Russia, the world’s top exporter, has also pointed to near-record amounts of wheat becoming available for shipment.

Russian winter 2022-spring 2023 wheat production is projected at 85.37 million tonnes, against the 84.74 million tonnes and 80.6 million tonnes expected in April and November last year, respectively, according to the most recent estimates from Argus Media's agricultural advisory arm, Agritel.

Investors continue to monitor the possibility of seaborne exports from Ukraine, after Italian PM Mario Draghi signalled on 28 June that trade corridors may open soon.

Ukrainian grain exports in the first 22 days of June were 44% lower year-on-year – shipped solely through rail and smaller Danube river ports, dubbed ‘Solidarity Lanes’. 22 million tonnes of Ukrainian grain were estimated to have been stuck in port silos since shipments were halted on 24 February.

July 1: Most-active CBOT #wheat futures hit the lowest point since Feb. 22 as selling continued across grains. Friday's settle of $8.46 per bushel is $4.39 (34%) off the May 17 contract high. pic.twitter.com/GSpVFBLTgA

Russia and Ukraine are major grain producers and exporters. According to the Food and Agriculture Organisation (FAO), Russia exported 32.9 million tonnes of wheat in 2021, accounting for 18% of global trade, while Ukraine shipped 20 million tonnes, equivalent to 10% of the global market share.

Following Russia’s invasion of Ukraine on 24 February, Russia blockaded the Black Sea, which is the main export route for Ukrainian commodities. Prior to Russia’s invasion, Ukrainian grain was exported via its Black Sea ports, which include Chornomorsk, Mykolayiv, Odesa, Kherson and Yuzhny.

Grain is one of Ukraine’s main industries, with exports totalling $12.2bn in 2021 and accounting for close to a fifth of the country’s exports.

Ukrainian ports will remain closed and commercial shipping will be suspended until the end of the Russian invasion, according to Ukraine’s Maritime Administration in March. The blockades halted most Ukrainian grain exports, which has led to a surge in global wheat market prices since late February.

According to agricultural industry association Ukrainian Agribusiness Club (UCAB)’s update on 5 May, Ukraine had only exported 200,000 tonnes of grain by rail as of March this year.

“In March we managed to export only 200,000 metric tons of grain, which is 4% of normal. We hope that export volumes will increase. Sometimes we’re big critics of the railway. Now we are [its] biggest fans. Those guys are doing an incredible job. We really need to unblock the Black Sea and that will be the solution for Ukraine. Otherwise, the 2023 sowing season simply won’t happen, because without sales, farmers will not have money to continue doing the work,” said Kateryna Rybachenko, CEO of Agro-Region Ukraine.

With ports blocked and the railways unable to handle the extra volume, Ukraine will only be able to export a maximum of two million tonnes of grain each month, according to a statement made by Taras Vysotskyi, Ukraine’s First Deputy Minister of Agrarian Policy and Food, in early June.

In May, Ukraine’s grain, oilseed and vegetable oil exports rose 80% month-on-month to 1.74 million tonnes, but were still significantly below May 2021 levels, according to official data.

As many low-income and food-deficient countries rely heavily on grain imports from Russia and Ukraine, the war has sparked a global food crisis.

In the latest wheat price news, the UN has been in talks with Russia since late May to plan an export corridor in the Black Sea to resume grain and fertiliser exports. If this plan was to be successfully implemented, the resumption of Ukrainian wheat exports would ease the existing tight global grain supply.

The UN Secretary-General, Antonio Guterres, said in a press conference in Sweden on 1 June that there needs to be “quick and decisive action to ensure a steady flow of food and energy in open markets, by lifting export restrictions, allocating surpluses and reserves to vulnerable populations, and addressing food price increases to calm market volatility.”

The UN is facilitating an export corridor in the Black Sea, which will allow the “safe and secure export of Ukrainian-produced food through the Black Sea … along with unimpeded access of Russian food and fertilisers to global markets, especially developing countries,” said Guterres.

According to UN spokesperson Rebeca Grynspan, she had “constructive discussions” with Russia’s First Deputy Prime Minister in Moscow on 31 May on the issue of facilitating Russian grain and fertiliser exports.

There is also a plan to open a corridor via Turkey for grain exports from Ukraine, but this is still in discussion between Ankara, Moscow and Kyiv.

According to a Ukrainian government official cited by POLITICO on 29 June, “A plan is under discussion that would open up blocked Ukrainian ports for ships loaded with grain, without the need to de-mine the waters in the area.”

According to the official, a security guarantee provided by Turkey or another state – likely one within NATO – is now the crucial missing piece of a deal. If all sides reach an agreement, a plan could be “finalised within days,” he said.

Despite the uncertainty surrounding a potential export resumption, there is cautious optimism in the market.

In May, the European Union (EU) set out an action plan to establish ‘Solidarity Lanes’ to help Ukraine export grain across Europe by rail.

“20 million tonnes of grain have to leave Ukraine in less than three months using the EU infrastructure,” said Adina Vălean, the EU Commissioner for Transport. “This is a gigantic challenge, so it is essential to coordinate and optimise the logistic chains, put in place new routes and avoid, as much as possible, the bottlenecks.”

However, the export capacity through railways is significantly lower than through seaports. In addition, Ukrainian wagons are not compatible with most of the EU rail network, so goods will need to be transferred onto lorries or wagons that fit the EU standard gauge.

To overcome these challenges in the short term, the EU has urged operators to:

UCAB pointed out in April that export capacity by rail is about 10% of Ukrainian seaports’ capacity, and that “the only option to avoid further rising prices and prevent famine is to unblock Ukrainian seaports and resume Ukrainian exports of agro-industrial products.” 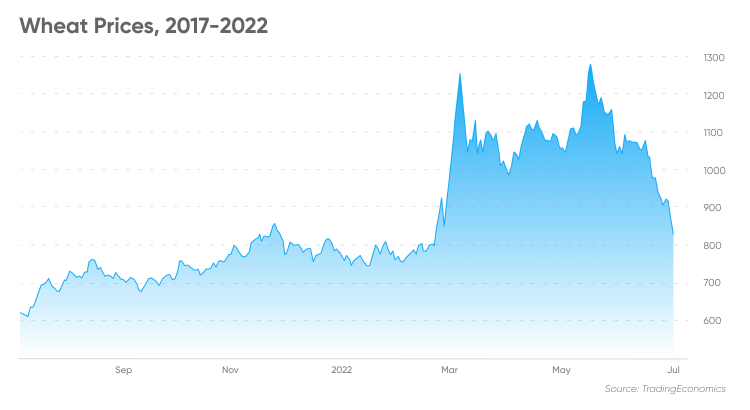 As a result of the war in Ukraine, the sowing area was reduced this year, and harvest is expected to plunge in 2022.

According to UCAB, the occupation of some Ukrainian territories by Russian troops, territorial proximity to hostilities and mined fields have all led to a reduction in the sown area. The Ukrainian wheat harvest is expected to fall to 18 million tonnes this year, down 44% from the previous year, UCAB said on 26 May.

According to US Department of Agriculture (USDA) data, global wheat production for the marketing year (MY) 2022/23 is forecast to fall to 774.8 million tonnes, down 4.5 million tonnes or 0.6% from the previous MY.

Production in Ukraine was forecast at 21.5 million tonnes in 2022/23, and Ukrainian exports were expected to fall by 47% year-on-year to 10 million tonnes. Russia was projected to be the top exporter, shipping 39 million tonnes, followed by the European Union with 36 million.

World wheat stocks are expected to fall to 267 million tonnes in 2022/23, their lowest level in six years and down 5% from the previous year.

According to Dutch agricultural bank Rabo Bank’s wheat market analysis in June, the outlook for the commodity is bearish in the short term, as other asset classes are falling due to inflation concerns and hawkish central bank rhetoric.

“Agri commodity prices have taken a tumble so far in June, with the S&P GSCI Agriculture Index losing 8.6%. The drop comes as other asset classes are falling (the Dow Jones Industrial Average was down 7.6% in the same period), triggered by interest rates hikes, inflation concerns, and hawkish central bank rhetoric,” said Rabo Bank.

In contrast, data and analytics provider Trading Economics forecasted wheat to trade at $8.54/bu by the end of the third quarter, rising to $9.42/bu in 12 months’ time, or by June 2023.

Algorithm-based forecasting service WalletInvestor’s wheat rate projection for the next 12 months was even more bullish than the USDA forecast at $10.76/bu. The site’s wheat price predictions saw the grain rising to $16.86/bu in the next five years.

Given the uncertain geopolitical development and market volatility, analysts have refrained from providing wheat price analysis or forecasts for 2025.

Note that analyst and algorithm-based predictions can be wrong. Forecasts shouldn’t be used as a substitute for your own research. Always conduct your own diligence and remember that your decision to trade or invest should depend on your risk tolerance, expertise in the market, portfolio size and goals.

Keep in mind that past performance doesn’t guarantee future returns, and never invest any money you cannot afford to lose.