Is Disney a good stock to buy?

Disney (DIS) was dealt a tough blow by the pandemic, with Covid-19 restrictions forcing the closure of its parks, resorts, stores and cruise liners. But as the Cinderella Castle stood empty, subscriptions for Disney+, its streaming site, soared, standing at over 196 million in April.

On 19 April, rival streaming site Netflix released its first-quarter results, revealing a loss of 200,000 subscribers and issuing guidance of a two million subscriber loss for Q2 2022. The news rattled markets, leaving investors wondering if the pandemic-induced streaming boom could be coming to an end.

With Disney’s second-quarter results due for release on 11 May, can Disney+ subscriptions keep up the momentum? Read on for the latest Disney stock predictions…

In November 2021, Disney’s stock value fell by more than 16% as investors were spooked by sluggish Disney+ subscription growth announced in the firms’ fourth-quarter results. After a brief rally, January 2022 saw another price dip, with the share price falling almost 25% between 12 January and 26 January, when it hit $135.

This turbulence was driven by rival Netflix’s third-quarter results – the streaming giant announced slower subscription growth, Markets reacted with concern that Disney could be subject to the same forces. Yet subscription numbers proved resilient, and the share price rallied following Disney’s better than expected Q1 results release on 9 February 2022.

But when Netflix released first-quarter results on 19 April, a similar story played out. Netflix announced that subscriber numbers were down by 200,000 and warned that Q2 could see the loss of two million subscribers. As investors again feared a streaming slowdown, the Disney share price tumbled. 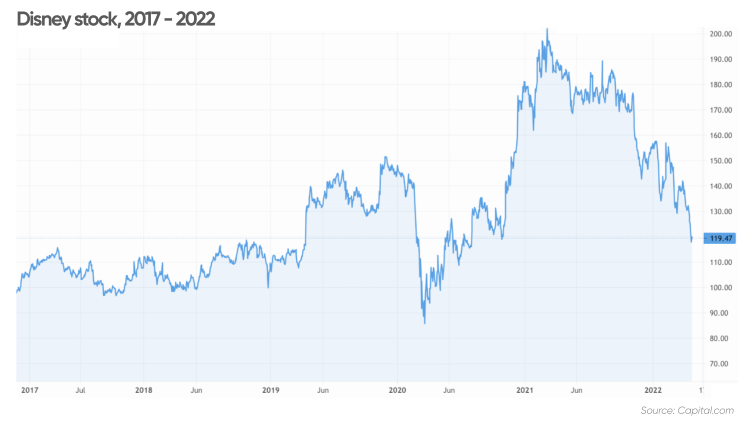 In terms of DIS technical analysis, the relative strength index (RSI) for Disney sat at 26.84 at the time of writing. A move in the RSI below 30 usually signals that an asset is being oversold and undervalued, and suggests that the Disney share price could be due an upward correction.

Markets were rattled by the disappointing subscription figures announced in Netflix’s Q1 results. With Disney’s Q2 results due for release on 11 May, investors are bracing for impact – but will this bumpy landing materialise?

Disney’s first-quarter results proved resilient: Overall revenues rose by 34% to $21.8bn (£16bn) over Q1, which exceeded analysts’ expectations of $20.9bn. This was driven by growth in both the Media and Entertainment Distribution and Parks, Experiences and Products divisions, which saw year-on-year revenue growth of 15% and over 100%, respectively.

Group operating profit more than doubled over the year to $3.3bn. Disney reported earnings per share (EPS) of $1.06, beating analysts’ expectations of $0.62.

Can Disney beat expectations again? Netflix attributed its disappointing subscription numbers to a number of factors, including the suspension of its service in Russia, macroeconomic conditions in Latin America and seasonality. These results raised questions about the long-term buoyancy of the streaming industry.

A ‘State of Play' report by analysts at Nielsen published on 6 April found that 93% of Americans said that they would increase their paid streaming services or make no changes to their existing plans over the next year, suggesting that future demand for streaming, in theory, remains strong.

Disney+ has also acquired subscribers at a very different rate to Netflix: Disney+ passed the 100 million subscriptions milestone within 18 months of launching, while it took Netflix almost a decade to reach the same level. 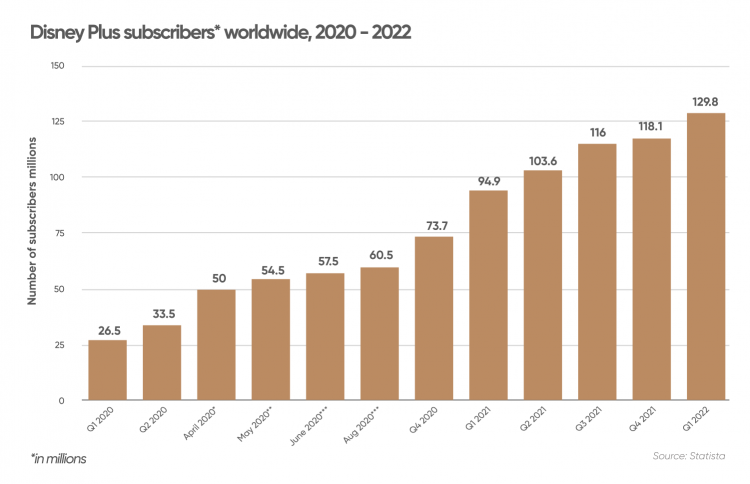 Q1 2022 also saw strong growth for Disney+ subscriptions, which rose by 37% to 129.8m, These figures roundly exceeded analysts’ expectations, and were all the more impressive when set in the context of its rivals – while Netflix netted 8.3 million new subscribers over the period, Disney managed 11.8 million.

Analysts have also voiced optimism thanks to the very different content offered by the streaming rivals.

“Streaming services are a dime a dozen these days, and standing out is an expensive undertaking. Unlike rivals Disney and now Amazon, which owns a trove of content through its MGM acquisition, Netflix doesn’t have much of a back catalogue of content comparatively speaking,” said Hargreaaves Lansdown Equity Analyst Laura Hoy in a 19 April note.

And it’s possible that Netflix’s loss could also be Disney’s gain, as Morningstar analyst Sandy Ward explained in a 20 April note:

“The growth in Netflix subscribers during pandemic-related lockdowns masked some underlying trends that are now being laid bare. Recent price hikes for Netflix’s video services amid increasing options, including Disney+ and Hulu, are to blame for some of the loss in subscribers,” said Ward.

It's important not to overstate the value of Netflix comparisons – Parks, Experiences and Products made up over a third of Disney’s Q1 revenues in 2022.

Disney’s park visitor numbers were initially decimated by the pandemic and ensuing restrictions, with visitor numbers at its California park falling 80% between 2019 and 2020.

Parks, and Experiences and Products saw revenue climb from $3.6bn in Q1 2021 to over $7bn in Q1 2022 as travel trends began to normalise. First-quarter results suggested that visitors were not only returning to the parks, but spending more on their trips.

There are hopes that parks revenue could see an even brighter outlook over the coming months as remaining Covid-19 restrictions are rolled back. According to a recent Disney release, character greetings will be phased back in, meaning visitors can soon enjoy hugs, autographs and selfies with their favourite Disney characters.

What is your sentiment on DIS?

Give DIS a try

However, inflation could still provide an unwelcome plot twist for Disney this year. The US Consumer Price Index (CPI) was running at 8.5% in March, meaning that households are feeling the pinch just as Disney faces pressure to increase prices.

“Household budgets under review means luxuries like multiple streaming subscriptions may come under fire. Disney needs customers to continue signing up in droves, or plans to scale and dig itself out of loss-making territory will get thrown,” said Hargreaves Lansdown’s Lund-Yates in a note.

Is Disney a good stock to buy?

There are multiple factors at play defining whether Disney is a good stock to buy. Note that your decision to invest in Disney should depend on your attitude to risk, your expertise in the stock market, your portfolio needs and investing time horizon.

Meanwhile, according to MarketBeat, analysts rated Disney a consensus ‘buy’, with 17 ‘buy’ ratings, six ‘hold’ and zero ‘sell’ based on 23 analysts’ views at the time of writing (26 April).

The consensus rating has been consistently ‘buy’ for the past year, though the number of analysts giving such recommendations decreased from 20 to 17.

“Disney’s wide moat and diversified revenue streams will keep the company spinning while the streaming world churns.”
by Morningstar

Amid disappointing subscription figures from Netflix and the subsequent stock crash, the question on investors’ lips is whether DIS could face a similar fate or will Disney stock go up.

But not all analysts were so optimistic. Hamilton Faber at Atlantic securities lowered his Disney price target from $172 to $167 following Q1 results, and Moffet Nathanson’s Michael Nathanson lowered his price target to $150 on 7 March.

In March, Morningstar analysts issued a fair value estimate of $170, stating that:

“Disney has multiple levers for revenue in addition to their streaming service, including theme parks, character merchandise, theatrical box office, and cable TV. Disney’s wide moat and diversified revenue streams will keep the company spinning while the streaming world churns.”

More recently, Ivan Feinseth of Tigress Financial reiterated his ‘buy’ rating on Disney, and issued a $229 price target – a 67.15% upside on the report date share price. Loop Capital’s Alan Gould was more bearish, dropping his price target from $190 to $165 on 4 April.

JP Morgan’s Alexia Quadrani lowered her expected price target from $200 to $175 on 19 April, but maintained an ‘overweight’ weighting on the stock. Rosenblatt Securities’ Mark Zgutowicz was prompted to initiate coverage on the stock on April 19th, and issued a ‘buy’ rating and a $177 price target – a 38.53% upside on the report date share price.

Note that analyst predictions are often wrong. Forecasts shouldn’t be used as a substitute for your own research. Always conduct your own due diligence before investing. And never invest or trade money you can’t afford to lose.

Looking towards 2030, Wall  tInvestor’s Disney stock projections suggested the share price could hit $189.54 in April 2026. In terms of its 5 year forecast, Wallet Investor projected that the stock could reach $205.57 in April 2027.

Note that algorithm-based predictions are often wrong. Forecasts should not be used as a substitutes for your own research and past performance does not guarantee future returns. Always conduct your own due diligence before investing. And never invest or trade money you can’t afford to lose.

Most tipped stocks: Which companies are analysts favouring?

Capital.com Disney stock forecast (2022–2025): Will the stock crash like Netflix?